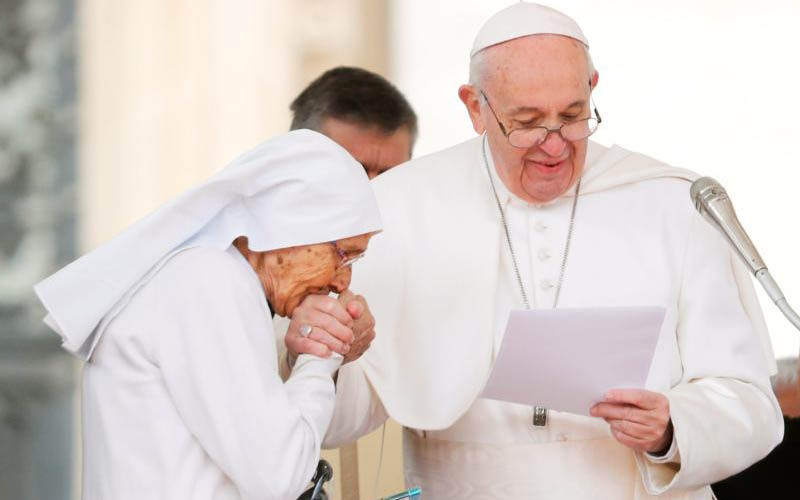 Sister Maria Concetta Esu, an 85-year-old Daughter of St. Joseph, kisses the hand of Pope Francis after the pontiff awarded her the Pro Ecclesia et Pontifice Cross during his general audience in St. Peter's Square at the Vatican March 27, 2019. (CNS photo by Vatican Media via Reuters)

VATICAN CITY (CNS) — Pope Francis has made it more than obvious that he does not like people kissing his ring.

The viral video of him yanking his right hand away from a string of about 17 people coming up to him one-by-one during a trip to Loreto, Italy, March 25, caught many people by surprise because of his sometimes-brusque manner.

But the short video clip did not show the other 30 minutes of the pope greeting others in the line with his usual style, evident throughout his pontificate: his preference for face-to-face, heart-to-heart human contact without the pomp and circumstance.

Instead of formal ring kissing, this has been a pope who prefers warm embraces, the European “air” kiss, solemn blessings and holding a person’s two hands like two friends would.

And the selfies. One would think the pope had all day the way he pauses to pose for group shots and wait for the not-so-tech-savvy to fumble and swipe, looking for camera mode on clunky phones.

If he shows impatience with those who want to kneel and kiss his ring, he is ready to bend low for people in wheelchairs or those unable to stand, lingering in conversation, offering a blessing, a kiss or a hug.

Normally, it is hard to notice the pope’s aversion to people wishing to kiss his ring.

Throughout the meet-and-greet moments in Loreto — like all on occasions — Pope Francis used a more subtle method: immediately placing his left hand on top of the right hand of his greeter, thereby blocking access to his ring. Those who lean down end up kissing his left hand or his right thumb.

At the same time, he has not hesitated to show his esteem and respect for others, for example, by kissing the hands of Holocaust survivors or kissing the hands of retired Pope Benedict XVI when he pays him a visit. Pope Benedict also tried — and failed — to dissuade people from kissing his ring, too, according to a series of interviews with him in the book, Light of the World.

When Pope Francis visits Morocco in late March, he will find a kindred spirit.

Crown Prince Moulay Hassan, 15, was once in the eye of the media storm when a video clip emerged of him as a 12-year-old refusing to let Moroccan officials bow and kiss his hand, yanking it away in the same style the pope briefly showed in Loreto.

The irony was the boy-prince had previously been criticized for being a “spoiled brat” and a “little dictator” for following the country’s protocol and tradition of letting people kiss his hand.

The crown prince, too, has been forced to walk the tightrope between ceremony and ritual versus humility and respect.