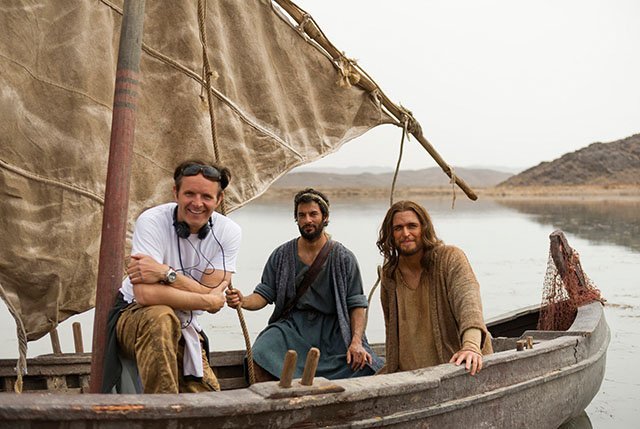 Producer Mark Burnett, actors Darwin Shaw and Diogo Morgado are seen on the set of the movie "Son of God." The upcoming movie should be seen as "a love story," according to two of its executive producers, the husband-and-wife team of Burnett and Roma Downey.

WASHINGTON (CNS) — The upcoming movie "Son of God" should be seen as "a love story," according to two of its executive producers, the husband-and-wife team of Mark Burnett and Roma Downey.

"This really is a love story — the greatest love story ever told," Downey said.

The couple brought the 10-hour miniseries "The Bible" to television last year, garnering sizable ratings on the History cable channel.

Among those 10 hours was the story of Jesus. But Burnett and Downey decided even before the miniseries was televised that they would make a separate movie focusing on Jesus.

"When we were in Morocco filming," Downey said, "I said to Mark, ‘We should have been making a film here.’" Downey, perhaps best known for her starring role for nine seasons on "Touched by an Angel," plays Mary, mother of the adult Jesus.

Burnett, whose TV successes have been primarily in reality programming from "Survivor" to "Shark Tank" to "The Voice" to "The Apprentice" to "Are You Smarter Than a Fifth Grader," concurred, but noted, "It wasn’t shot any differently" for multiplexes than "The Bible" had been for TV. "We use different camera angles. We shoot so much film of every scene it’s easy to make alternate choices."

"Son of God" premieres in theaters nationwide Feb. 28. It tells the story of Jesus through the eyes of an elderly St. John — the only apostle who did not meet a martyr’s fate — on the isle of Patmos.

The film portrays the same kind of brutality seen in "The Passion of the Christ" a decade ago, although it’s concealed or suggested, as it had been in the miniseries. "Son of God" is rated PG-13 by the Motion Picture Association of America for "intense and bloody depiction of the Crucifixion, and for some sequences of violence." Some material may be inappropriate for children under 13.

Downey did not dwell on the violent aspect of the movie, but in comparing the two films noted Mel Gibson’s film presupposes the viewer knows the story of Jesus, as it begins with Holy Thursday. "Son of God," though, begins with Jesus’ birth, and through the signs and wonders he performs in the first hour of the movie, she said, "you get a chance to fall in love with him all over again."

During a Feb. 4 interview with Catholic News Service while Downey and Burnett were in Washington to promote the movie, Downey said the endorsement of religious leaders is a big help. Two Catholic prelates have endorsed "Son of God": Cardinal Donald W. Wuerl of Washington and Archbishop Jose H. Gomez of Los Angeles. High-profile Protestant leaders endorsing the film include Bishop T.D. Jakes and the Rev. Rick Warren. "Cardinal Wuerl has been so much of a help to us," she added.

Burnett said the Anti-Defamation League had also given its own stamp of approval, based in large part on the depiction of events that lead up to Jesus’ death: Pontius Pilate having been the fourth Roman governor of a politically restive Judea in the last 20 years; Jerusalem’s temple leaders, embodied by Caiaphas, being aware of Pilate’s threat to shut down the temple, even at Passover, if Jewish unrest is not tamped down; and the arrival into the holy city of a Nazarene miracle-worker whose reputation precedes him. Burnett added his hope that "Son of God" audiences "could actually see themselves as the disciples" in this stew of political intrigue.

One of Downey’s favorite moments in the movie is not from the dramatic side of the movie, but something that wasn’t even in the script. In a scene presaging Jesus’ feeding of the five thousand, Jesus and the Apostles are in a boat near the coastline. Children running along the shore wave to Jesus, and Jesus (Diogo Morgado) waves back and smiles.

"That wasn’t Jesus waving," Downey said. "That was Diogo waving." "We got so much feedback (after the miniseries) from people saying they like what Diogo Morgado brought to the role." She added that she thought it fortuitous that a Latin American was cast as Jesus — Morgado is Brazilian — as the Argentine-born Pope Francis was chosen to lead the Catholic Church.

After a full day of interviews, Downey and Burnett went to the Basilica of the National Shrine of the Immaculate Conception to show clips from the movie and to talk with students from the adjacent Catholic University of America. On Feb. 5, they hosted an invitation-only preview screening at the 1,200-seat Lincoln Theater in Washington.

A year ago, on a similar tour to promote "The Bible," Downey said she wished they had 20 hours to tell Bible stories instead of the 10 that was eventually settled on for the TV audience. Now, with two-plus more hours, they were able to go into a bit more depth with Jesus’ story. "It could have just as easily been three hours, 20 minutes," Burnett said.

The success of "The Bible" also produced another spinoff: "A.D," a 12-hour miniseries to be shown on NBC, taking the story of the Apostles and the early Christians to the small screen.