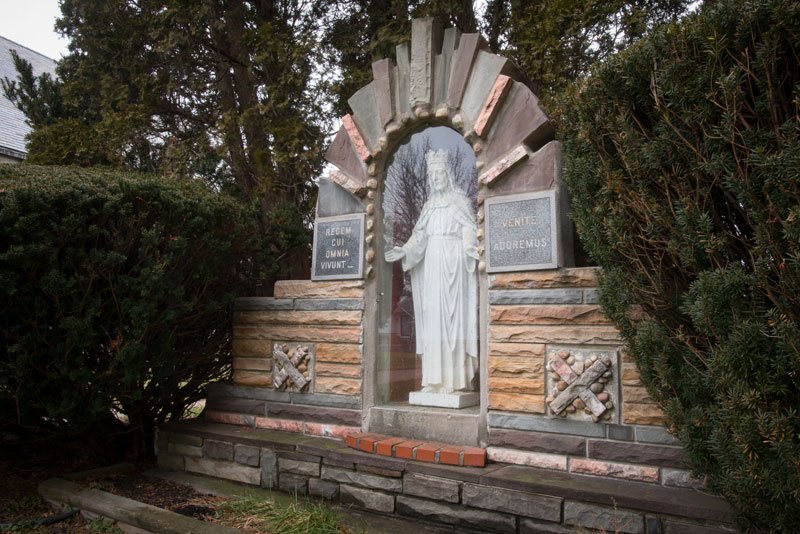 Two worship sites in Corning and one in Painted Post constitute All Saints Parish, which was established in 2001 in Steuben County’s southeastern section.

‚Ä¢ Founded in 1848, St. Mary is the mother church of Corning. Its first building opened in 1849, serving mostly Irish and some German immigrants. The current church opened at 155 State St. in 1870 and was dedicated in 1871. The campus also houses All Saints Academy, where Catholic education has been offered since the former St. Mary School opened in 1855.

‚Ä¢ St. Vincent de Paul was established in 1913 for a growing number of Catholics on Corning’s north side. Its first church, at the corner of Flint Avenue and Ellicott Street, was dedicated in 1914. Ground was broken for the current church, 222 Dodge Ave., in 1954 and the structure was dedicated in 1955.

‚Ä¢ St. Patrick was established in 1869 to accommodate the city’s growing Irish Catholic population. One year later Father (later Monsignor) James J. Bloomer became pastor and served for 61 years. Father Bloomer oversaw construction of a temporary church in 1871, as well as the current structure at 604 Park Place that was dedicated in 1874.

‚Ä¢ Founded in 1848, Ss. Peter & Paul is the oldest of Elmira’s Catholic parishes. Two small churches, erected in 1849 and 1850, served the parish until the current church was dedicated in 1857. That structure has successfully recovered from damaging floods in 1946 and 1972. Located at 556 St. Joseph’s Blvd., it is flanked by St. Joseph’s Hospital and Blessed Sacrament’s parish center, which opened in 2004 and is home to Elmira Community Kitchen.

Blessed Trinity’s faith communities in Waverly, Newark Valley and Apalachin comprise a wide swath of Tioga County. The three combined into one parish in 2003; since then, they have shared staff and resources with St. Patrick in Owego.

‚Ä¢ St. James was founded in 1853 ‚Äì a year before the Village of Waverly was incorporated — with the opening of its first church. A second structure was dedicated in 1871 but was destroyed by a fire on St. Patrick’s Day 1912. However, just 20 months later, a new church was dedicated at 503 Clark St. and remains as St. James’ worship facility.

‚Ä¢ After a chiefly Irish congregation had been gathering for Mass in Newark Valley for at least a decade, St. John the Evangelist was founded in 1881 with the dedication of its church. For many years beginning in the late 1920s, the parish was staffed by Polish priests serving immigrant farmers. The original church at 24 Rock St. remains the only worship facility in St. John’s history.

‚Ä¢ The youngest worship site in Blessed Trinity is St. Margaret Mary, founded in Apalachin in 1954. Masses were originally held in a Grange hall before a chapel was dedicated in 1956. One decade later, work began on the current church at 1110 Pennsylvania Ave., which was dedicated in 1967.

‚Ä¢ Founded in 1842, St. Patrick is among the oldest Southern Tier parishes, having been established for Irish immigrants settling in growing numbers in and near the Village of Owego. The first church opened in 1850 and was replaced in 1890 by the current edifice at 300 Main St. near the banks of the Susquehanna River. In 1978, Tioga County Rural Ministry was founded in St. Patrick’s basement and now is located at 143 North Ave. in Owego.

Three churches serving the northern and western portions of Elmira became incorporated as a single parish in 2009 under the name Christ the Redeemer.

‚Ä¢ Our Lady of Lourdes was formed in 1940, and its founding pastor, Msgr. Leo G. Schwab, served for 29 years. The parish’ first and only church at 1100 W. Church St. was dedicated in 1941. The building’s interior features a replica of the grotto at Lourdes, France, commemorating the site where the Virgin Mary is said to have appeared to St. Bernadette.

‚Ä¢ Founded for Polish immigrants, St. Casimir was established in 1890, when its first church also opened. In 1912 the current church was dedicated at 1000 Davis St. A decade later, a perpetual-adoration chapel opened in St. Casimir’s basement and remains one of only two such chapels in the Southern Tier.

‚Ä¢ Established in 1897 as a mission of St. Mary in Horseheads, St. Charles Borromeo was established just one year after the Village of Elmira Heights was incorporated. In 1905 the parish’s first church on Grand Central Avenue was dedicated, and in 1935 St. Charles Borromeo became a full-fledged parish. The current church at 130 Oakwood Ave. was built in 1959 and dedicated in 1960.

Long known as the “A-B-C Churches,” faith communities in Addison, Bradford and Campbell have operated as a single parish since 2010.

‚Ä¢ St. Catherine of Siena was founded in 1854 to meet the spiritual needs of Addison’s Irish settlers. A church went up within the two years of the parish’s founding. It was replaced in 1887 by a new, larger structure that remains in operation today at 49 Maple St.

‚Ä¢ The first Masses in the Campbell area were celebrated during the 1850s in private homes, mostly those of Irish immigrants. St. Joseph Parish was founded in 1871 and opened a new church that year at 8508 Main St. St. Joseph Church, which remains in operation, was formerly a mission of St. Patrick in Corning and later of St. Mary in Bath.

‚Ä¢ St. Stanislaus was established in 1923 due to the influx of Eastern European farming immigrants in the Bradford area. A small chapel served as its church from 1926 until 1930, when the current church at 7646 Whitehead Hill Road opened. A mission served by Polish priests for much of its existence, St. Stanislaus was incorporated in 1963.

Commonly known as St. Mary Southside, St. Mary was founded in Elmira in 1872, and its first church was built the same year. Three years later a larger brick building was constructed at 224 Franklin St., which remains in use today. The parish school opened in 1898 and now operates as Holy Family, a regional elementary school.

Originally known just as St. Mary, this parish was founded in 1866 in Horseheads with the opening of its first church; a second church was dedicated in 1903. In 1959 St. Mary School opened along with a temporary chapel at 811 Westlake St., and in 1963 a new chapel opened. Two years later “Our Mother” was added to the parish and school titles. The current church at 816 W. Broad St. was dedicated in 1979. to serve a growing parish community.

The cluster of St. Benedict in Odessa and St. Mary of the Lake in Watkins Glen represents the only two Catholic parishes in Schuyler County.

‚Ä¢ Serving Catholics in southern Schuyler, St. Benedict was founded in 1948 at 169 Speedway Road. The first Mass in St. Benedict’s new chapel took place on Christmas Day 1955, and an upper church was completed in 1964. Even before formation of the Schuyler Catholic Community cluster, St. Benedict shared a pastor with St. Mary of the Lake for much of its existence.

‚Ä¢ Located at the southern tip of Seneca Lake, St. Mary of the Lake was founded in 1846 when members worshipped in a former Presbyterian church. In 1868 the parish moved to its current location at 901 N. Decatur St., and in 1869 it was elevated from mission status to independent parish.