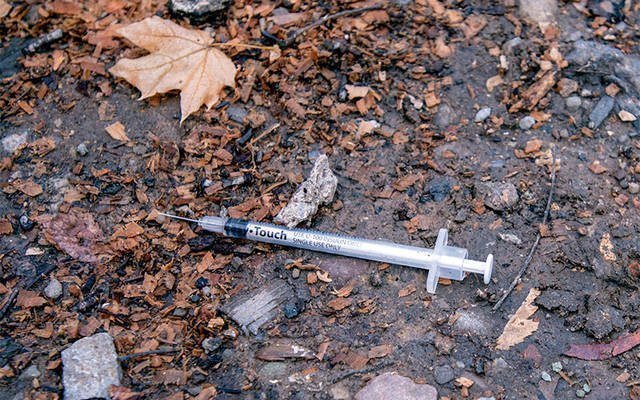 A used needle is discarded in a vacant lot near North Clinton Avenue in Rochester in December 2016.

ELMIRA — On a recent Friday morning, the reception area at CASA-Trinity of Chemung on Lake Street was filled with adults — men and women of all ages, all styles of dress.

They had one common link: seeking help for their addictions, many of which likely involved opioids.

Opioid abuse represents the most common diagnosis for adults — having even eclipsed alcohol beginning a year ago — among the nearly 500 clients currently active with the CASA-Trinity office, said Katie Basu, its clinical director.

“A lot of people have the assumption that (opioid addiction is) not going to happen to them,” Basu told the Catholic Courier. “But we work with all ranges of education — people with doctorates, high-school dropouts, professionals in the community. It’s people from every demographic you can think of, and every socioeconomic status.”

The problem is particularly acute in the area served by CASA-Trinity of Chemung, a nonprofit agency offering prevention and treatment services related to chemical dependency. According to Common Ground Health, a Rochester-based research group, Chemung County had the highest rate of opioid abuse in 2016 within a nine-county region that also covers Monroe, Wayne, Livingston, Ontario, Seneca, Yates, Schuyler and Steuben counties.

And, in September 2017, the Monroe County Medical Examiner’s office reported that in 2016 the use of heroin, opioids, fentanyl or related drugs caused 206 deaths across a 10-county region that includes Chemung. That death total reflected a sharp rise from 85 opioid-related deaths in 2015 and just 11 in 2011.

The crisis — termed by many to now be an epidemic — has spread nationwide. For instance, according to the Centers for Disease Control and Prevention, overdose deaths related to heroin have more than quadrupled in the past eight years.

Heroin, which is processed from morphine, is a derivative of the opium poppy plant. Other opioids — drugs that are produced through either a partial or full synthetic process — include oxycodone, hydrocodone and methadone.

Basu explained that many older adults become addicted to opioids after having them prescribed as pain medication. She added that younger adults might start out abusing opioids but are apt to turn to heroin, which tends to be much cheaper than prescription medication and often easier to obtain despite being illegal.

One opioid of special note is fentanyl — a painkiller that, according to the Centers for Disease Control and Prevention, is 50 to 100 times more powerful than morphine. When mixed in with heroin or even packaged and sold as heroin, fentanyl further raises the odds of overdose or death for an unsuspecting abuser.

As the opioid crisis continues to deepen, Basu is giving several public seminars to raise awareness. One took place Jan. 28 when she spoke at a panel presentation at the Elmira Faith Formation Center, located at St. Casimir Church. The event, a joint effort of Catholic Charities of Chemung/Schuyler and the social ministries of Elmira-area parishes, was in keeping with the wishes of Bishop Salvatore R. Matano and the Diocesan Public Policy Committee to spread the word about the crisis and seek potential action. The opioid crisis is one of the committee’s two educational priorities for 2018.

Basu said that a combined effort also is required from law enforcement, legislators and the medical profession to reverse the current tide of abuse. In addition, Basu hopes that the media and general public will devote more attention to the fact that drug addiction can be treated and overcome.