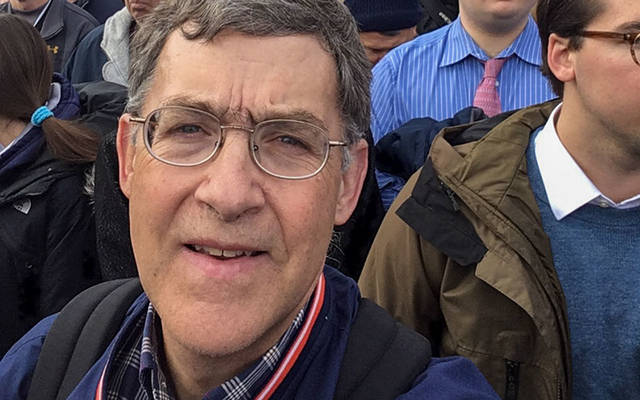 MONTOUR FALLS — While serving as a U.S. Army doctor at Fort Ord, Calif., in the early 1990s, Dr. Stephen Spaulding began reflecting deeply on his chats with a young Catholic intern, F.J. Milligan, who strongly defended the church’s stance on birth control.

“He got me going,” Spaulding recalled, saying that since medical school he’d followed popular belief that birth control was morally acceptable.

Having reached a crossroads with how his faith life meshed with his profession, Spaulding soon ceased the birth-control aspects of medicine. He wife, Dr. Theresa Spaulding — also an Army physician — agreed with his evolving perspective and began doing likewise.

A year later, as the Spauldings prepared for a move back East to be closer to their families, Stephen discovered that word was already spreading about his impending arrival in the Southern Tier. A pro-life advocate from the area, the late Sharon Pearte, contacted him while he was still on the West Coast and lined him up to give a pro-life talk at Elmira’s St. Joseph’s Hospital.

“People were hungry for a pro-life doctor,” said the Syracuse native, who graduated in 1981 from SUNY Upstate Medical University in that city.

In 1992, following 11 years as an Army doctor in Colorado, Germany and California, Spaulding opened a family practice in Montour Falls that continues to this day; it’s located on West Main Street in the Schuyler County village. His wife, now retired, practiced alongside him on a part-time basis over much of that time, with many patients traveling considerable distances to be served by Catholic physicians who decline to issue contraceptives or perform abortions or sterilizations. Spaulding also is affiliated with Schuyler Hospital.

Along with his medical practice, Spaulding — who turned 65 on Sept. 21 — devotes himself to publicly advancing the consistent life ethic, which promotes the dignity and preservation of human life in all forms from conception until natural death. A leading example is his dedication to the March for Life, held each year to protest the U.S. Supreme Court’s 1973 Roe v. Wade decision legalizing abortion in this country. Spaulding has journeyed to Washington, D.C., nearly every year since attending his first March for Life in 1993, including the most recent march this past Jan. 24, which he said was attended by hundreds of thousands of people. He also annually coordinates Southern Tier bus caravans for the march leaving from St. Mary Our Mother Church in Horseheads, where he and his wife are parishioners.

In addition, Spaulding is the longtime president of Chemung Valley 4 Life, an ecumenical pro-life organization. He often joins in for the group’s prayer vigils at Planned Parenthood facilities, saying he enjoys being among like-minded people at the vigils and other activities.

Spaulding said he plans to maintain his advocacy efforts for as long as abortion remains legal in the United States. Particularly distressing to him was Gov. Andrew Cuomo’s signing of the Reproductive Health Act in early 2019 that significantly expanded access to abortion, including late-term abortions.

“It’s terrible,” Spaulding said of the act. “I don’t know how people can make such a big thing out of killing innocent children, and how that’s something good.”

Spaulding acknowledged that his commitment to pr0-life causes is time-consuming but said it’s “something that needs to be done,” calling the abortion debate “the biggest human rights and moral issue of our age.”

Spaulding and his wife, who have been married for 38 years, have three grown children and six grandchildren. He said he’s considering retirement at the end of next year but that his defense of life will continue, perhaps in the form of working part time for a pro-life organization.

“Other people might be called to catechesis or serving the poor,” he said. “I just think this is something I’ve been called to.”