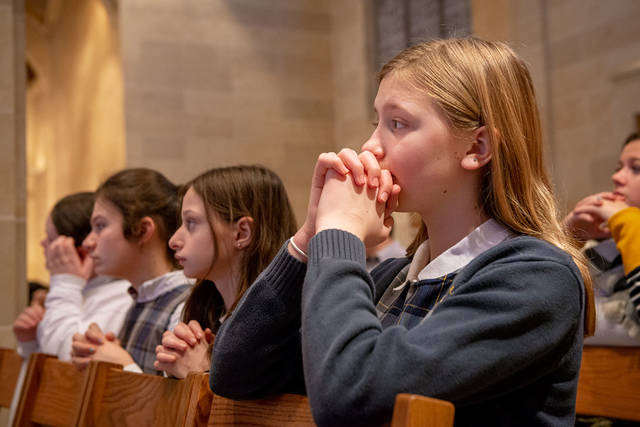 ROCHESTER — As they awaited the start of Mass Jan. 29, some bleary eyes were evident among the students from Holy Family Catholic School in Elmira and St. Mary Our Mother School in Horseheads.

With a bus trip lasting well over two hours, the two Chemung County institutes earned the distinction of longest distance traveled among diocesan schools filling Sacred Heart Cathedral nearly to capacity for a special Catholic Schools Week liturgy. In fact, Ethan Wheeler of Holy Family and Kaelyn McCarthy of St. Mary Our Mother, both sixth-graders, reported that they arose at 5:15 that morning to begin preparations for attending the 10 a.m. Mass.

However, there was abundant energy crackling through the cathedral to help offset any weariness, thanks to the presence of several hundred students, faculty and staff from not only the Southern Tier but also the Finger Lakes region and many parts of Monroe County. With Bishop Salvatore R. Matano serving as celebrant, those in attendance took part in an upbeat liturgy with a number of students assisting as lectors, altar servers, choir members and gift bearers. In addition, young people processed into the cathedral at the start of Mass carrying their respective school banners. Festivities later extended beyond the conclusion of Mass, with participants relocating to the cathedral’s narthex for a cookies-and-punch reception and numerous school contingents posing for group photos with Bishop Matano.

“Our cathedral was filled with smiling, talented and faithful children. It was truly a little glimpse of heaven,” commented James Tauzel, who recently was named diocesan superintendent of schools.

Among the students taking on volunteer roles that morning were Mary Davis and Jack DeVito, both fifth-graders at St. Agnes School in Avon, who were selected as two of the altar servers for Bishop Matano. Mary said after the liturgy that having such an honor felt “special,” and Jack added that he was happy about assisting the bishop as well as “just being here” for the Catholic schools celebration.

The annual Mass at the cathedral was instituted in 2016 as an important addition to Catholic Schools Week, coming in the middle of a celebratory week that traditionally features fun and faith-filled activities at each diocesan school. Tauzel said that the Jan. 29 Mass offered students the opportunity to “gather together under one roof to celebrate the Eucharist with our bishop,” remarking that bringing so many Catholic schools together helped young people to see “that they belong to something bigger than just their local school and parish communities. It allows the children to experience God’s love in a beautiful, united way.”

In addition, the Mass gave many people — especially those from outside the Rochester area — a chance to see the diocese’s mother church that they may not have had otherwise. For instance, nearly every student from Holy Family raised a hand when asked if they were visiting the cathedral for the first time.

“It’s really nice. It’s kind of like an Egyptian palace,” Ethan said of the cathedral, the interior of which was completely refurbished in the early 2000s.

“It was really pretty,” she said.

As school groups began boarding buses to close out the morning, Kaelyn noted that St. Mary Our Mother wasn’t heading home quite yet: Still to come that day was a planned stop at the Rochester Museum and Science Center. Thanks to St. Mary Our Mother and Holy Family sharing a chartered bus that day, participants from both schools got to experience not one, but two popular Rochester landmarks before finally returning to the Southern Tier.