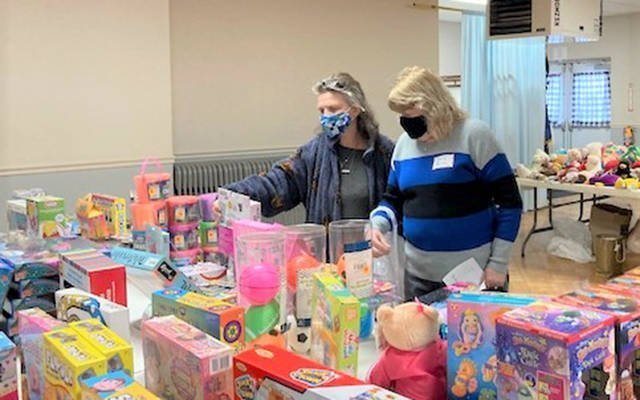 “This community is amazing,” remarked Sister O’Brien, a Sister of St. Joseph of Carondelet. “I think our community does a fantastic job.”

A recent example of that generosity was on display Dec. 10, when TCRM conducted its annual toy giveaway at the Veterans of Foreign Wars Post No. 1371 on Main Street in Owego. Recipients from a total of 111 families left the facility with items selected from several tables full of toys, as well as donated books and jackets.

Sister O’Brien said that because of the coronavirus pandemic, she had harbored initial concerns about whether to conduct the giveaway. She explained that Toys for Tots — a countywide initiative sponsored by the local Marine Corps League and a chief supplier of the TCRM effort — was not able to furnish as many toys as usual this year, due to decreased contributions from businesses that have been hampered financially by the COVID-19 crisis. However, TCRM received enough donations of money and toys through other sources so that a large supply of toys could be made available for the giveaway, thus ensuring that area children from struggling families would have a more joyful Christmas.

“The demand got met because of all the groups that helped out,” Sister O’Brien said.

She also had been concerned that the giveaway might present a risk of virus spread. However, Sister O’Brien said, “I really wanted to make this work.” So organizers implemented several safety measures, such as letting in only 10 families at a time during the three-hour distribution Dec. 10 and enforcing mask-wearing and social distancing.

Sister O’Brien noted that the toy giveaway was designed so that parents could choose items to suit their children’s interests, as opposed to being assigned gifts that weren’t really wanted or needed.

“It’s wonderful the kids get something that they like,” she said.

Thanks to the many donors and volunteers, along with the willingness of the VFW post to lend space for conducting the giveaway, Sister O’Brien said that the event “was fabulous. Everybody came away happy.” She added that in addition to the toy effort, TCRM is coordinating the adoption of low-income families for Christmas so that they receive such items as toys, clothing, food and other gifts.

These holiday-related initiatives are among a variety of services and programs offered by TCRM, which was begun in 1978 as a cooperative effort of the Diocese of Rochester, the Sisters of Mercy and Tioga County’s Catholic parishes. The ministry is located at 143 North Ave. in Owego, and its phone number is 607-687-3021. Buoyed by donations of money, food, supplies and volunteer support, TCRM serves people in need of all ages in the village and town of Owego along with other largely rural parts of Tioga County.