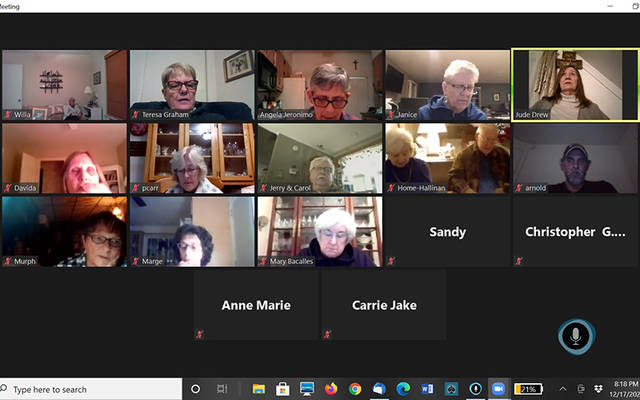 The rosary is said over video call. (Screenshot courtesy of Angela Jeronimo)

A nightly online rosary get-together, begun this past spring by a small group of Catholics in the Southern Tier, was originally intended to last one month.

Yet more than half a year later, that initiative is still going strong — and could end up extending well into the future, thanks to a growing number of worshipers who continue to connect virtually.

Angela Jeronimo, a member of All Saints Parish in Corning, said that she and a few other parishioners formed the rosary gatherings in response to a plea by Los Angeles Archbishop Jose H. Gomez, who also serves as president of the United States Conference of Catholic Bishops. On May 1, 2020, Archbishop Gomez led a renewal of consecration for this country and Canada to the Blessed Virgin Mary. He implored the faithful to follow Pope Francis’ suggestion to pray the rosary at home throughout the month of May while quarantining from the coronavirus pandemic, asking for Mary’s intercession in ending the health crisis.

Jeronimo said the local rosary effort proved so popular that when May 31 rolled around, participants opted to keep the nightly ritual going and placed a notice in the All Saints bulletin inviting others to join.

The rosary continues to this day, taking place seven days per week. It was originally conducted at 8 p.m. before moving to 7:30 p.m. beginning Dec. 20. Jeronimo said that anyone is invited to join the rosary group and there is no obligation; those interested can receive a Zoom link by emailing angela.jeronimo@anawim.com.

Each virtual meeting begins with the offering of various intentions; for instance, the Dec. 20 rosary was preceded by prayers for an end to the pandemic and abortion as well as for the soul of somebody who had just passed away. Then the group of 20 prayed the five Glorious Mysteries, wrapping up the 30-minute event by saying and waving goodbye to each via their computers.

Jeronimo said that participants plans to continue the nightly rosary at least through the end of May 2021 and possibly carry on even further, with the pandemic being its chief prayer focus.

Approximately 25 people regularly take part in the gatherings, Jeronimo said, with participants taking turns leading the rosary. Many are from the Southern Tier, with several connected to the Anawim Community in Corning — a Catholic spirituality center dedicated to eucharistic and Marian devotion, prayer and reflection, and missionary endeavors. Jeronimo, a longtime Anawim Community member, noted that the nightly rosary also garners participants from Anawim’s other two outlets in the Philippines and New Jersey.

Jeronimo observed that the rosary initiative affords people the opportunity to share a common bond, despite being isolated due to distance and/or sheltering from COVID-19.

“This group is amazing. People really feel connected,” Jeronimo said, adding that not too many years ago, a large virtual gathering of this sort wouldn’t have even been possible.

“I think God is so good. This technology has really blossomed,” she said.