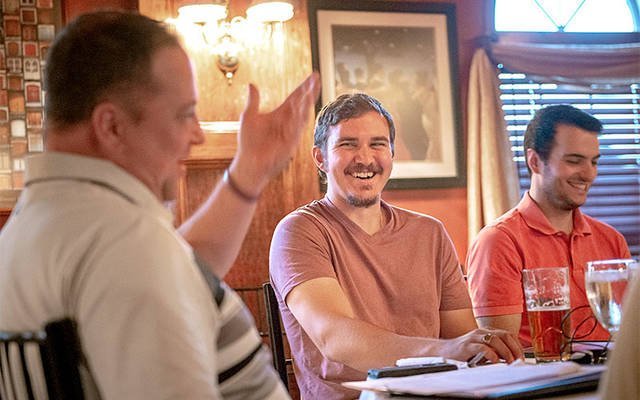 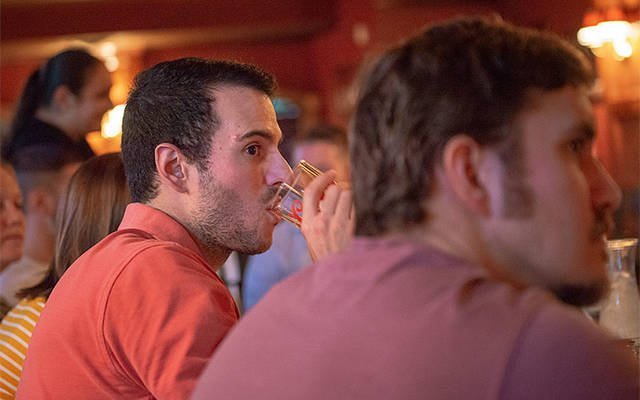 Zack Lincoln listens to the discussion during a Sept. 14 Faith on Tap at Club 57 in Hornell. (Courier photo by Jeff Witherow)

At times, Jarrod Shafer has wished he could get to know other young-adult parishioners at Our Lady of the Valley beyond simply recognizing faces in the crowd.

Thanks to a new initiative at the Steuben County parish, Shafer, 29, now has that opportunity. He and his wife, Meredith, 28, regularly attend “Faith on Tap,” a young-adult Catholic discussion series in Hornell that’s getting high marks from participants.

“I think it’s important having something like this. It kind of opens up the number of connections you can make,” Shafer said.

Faith on Tap was launched in March 2018 and has been held every month since, offering young adults the chance to discuss and reflect on issues of faith in an informal setting. Prete noted that Faith on Tap is patterned after the Theology on Tap series held in various parts of the Rochester and Buffalo dioceses. Sessions are held on Friday evenings at such popular Hornell venues as Club 57, Paddy’s Pub and Marino’s Restaurant, with Prete serving as host and frequently being joined by Father Stan Kacprzak or Deacon Mark Clark from Our Lady of the Valley Parish.

Participants decide the Faith on Tap themes, basing them on faith-related issues of importance to them. The most recent Faith on Tap, held Sept. 14, focused on “Family Planning the Catholic Way.” Previous topics have been “Why I’m Proud to be Catholic,” “Should the Church Involve Itself in Social Issues?” “Will the Church Ever Change?” “How to Talk Faith with the Non-Faithful,” “Immigration and Human Rights” and “To Be Holy, You Need to Act Holy.”

“Sometimes, depending on the topic, we might have a difference of opinion, but do it in a manner that’s respectful of each other,” Shafer said.

Prete said the targeted age range for Faith on Tap is 18 through 30s, either married or single; average attendance thus far has been about 12 per session.

“The group really looks forward to each gathering,” he remarked. “The people who attend really want to come, not only as a social gathering and a night out but for discussion that really is meaningful to them — things that affect their lives not only religiously, but their everyday lives.”

Also in the works at Our Lady of the Valley is a mini-retreat “What Now, God?” to be held at Hornell’s St. Ann Church Sunday, Oct. 7, from noon to 5 p.m. The event will explore vocational discernment for young adults; a similar theme is also being addressed in October at the 15th Ordinary General Assembly of the Synod of Bishops in Rome. In addition, the Hornell retreat will feature a guest presenter, Stacey Sumereau-Jackson, a Catholic from Elmira who draws from her life experiences to share a message of self-worth and hope. (Those interested in attending should contact Prete at prete1818@yahoo.com.) And on Nov. 16, Faith on Tap will return at 7 p.m. at Club 57 with the theme of “Misconceptions of the Catholic Faith.”

Prete noted that the creation of Faith on Tap stemmed from discussions between himself and Father Kacprzak, pastor of Our Lady of the Valley since June 2017. They concurred that Catholics moving into adulthood often struggle to find age-specific programs related to their faith.

“If you look at it from a pipeline perspective, they really don’t have any (age-specific programs) after they get out of youth group,” Prete said. He and Shafer added that offering such opportunities might spur young adults to become more active in parish life and also re-engage in their faith if they’ve fallen away.

The importance of ministry to young adults has been noted at other Southern Tier parishes as well. Other efforts in the past year have occurred at Immaculate Conception in Ithaca, which invites young adults to join in a book club every Sunday afternoon; All Saints in Corning/Painted Post, which has offered Theology on Tap in recent years, including a series that ran this past spring; Most Holy Name of Jesus in Elmira, which began a young-adult group earlier this year; Schuyler Catholic Community, which has recently hosted young-adult discussion gatherings at St. Mary of the Lake Church in Watkins Glen; and the cluster of St. Rose, Lima/St. Agnes, Avon/St. Paul of the Cross, Honeoye Falls, which offered Sunday-afternoon get-togethers for young adults over the summer.

Shafer — who plans to attend the Oct. 7 mini-retreat in Hornell along with his wife — said he values the chance to bond with folks who are similar both in age and religious beliefs.

“Especially in today’s world. It’s tough to find people that believe the same values as you do,” he remarked.