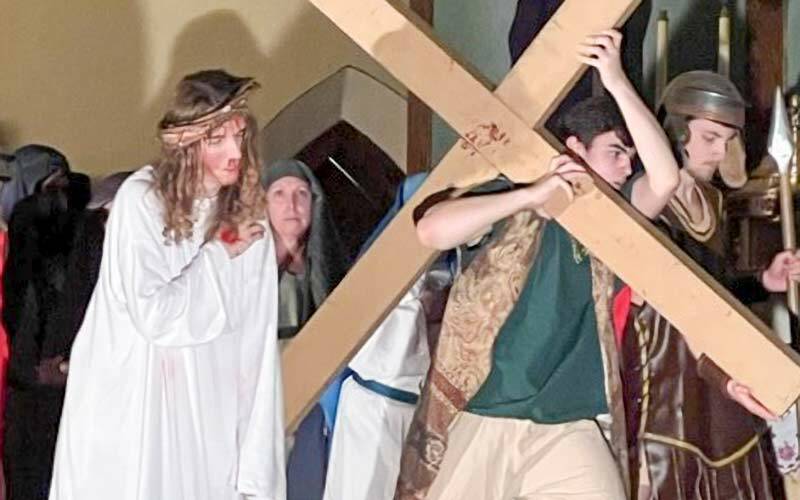 With Lenten activities at their highest levels in two years, Southern Tier parishes showed strong signs of ongoing recovery from the coronavirus pandemic.

Programs and initiatives around the Tier for the recently ended Lenten season included the following, listed by county:

Parish of the Most Holy Name of Jesus in Elmira featured studies of the writings of Thomas Merton; Scripture study after the 12:05 p.m. Mass on Fridays; and a March 27 session on fasting. In addition, a Living Rosary was held March 1o; a service noting Jesus’ passion through Scripture and music took place March 20; and a Tenebrae service was held April 13.

Last but not least, kindergarten faith-formation students from Most Holy Name of Jesus conducted a Lenten project, collecting toilet paper for the parish pantry.

St. Luke the Evangelist Parish supported CRS Rice Bowl — as did many other diocesan parishes — as well as Teresa House, a comfort-care ministry in Geneseo.

Meanwhile, a holy hour with adoration took place each Friday evening at St. Mary of the Lake Church in Watkins Glen.

At St. John Vianney Parish, Stations of the Cross and rosary recitation took place on Wednesday evenings, alternating between St. Mary Church in Bath and St. Gabriel Church in Hammondsport.

Our Lady of the Valley Parish utilized Hallow — a Catholic meditation and prayer app — to reflect on themes surrounding Jesus’ death on the cross. The western Steuben County parish also offered weekly adult faith-sharing reflections on the Lenten Scriptures.

At All Saints Parish in Corning, Zoom sessions were offered to expand understanding of the sorrowful mysteries; Lenten Bible study was held on Wednesdays; and Friday-night meals were offered after Stations of the Cross.

At Ss. Isidore and Maria Torribia Parish in central Steuben County, Deacon Douglas Farwell organized a variety of prayer opportunities and also led reflection on the United States bishops’ 2021 document The Mystery of the Eucharist in the Life of the Church.

At Immaculate Conception Parish in Ithaca, a young-adult holy hour was held every Sunday evening at the church. In addition, the parish continued its tradition of furnishing collection bags — into which donors put their spare change during Lent — to benefit Catholic Charities.

At St. Catherine of Siena in Ithaca, the liturgy committee assembled a calendar of Lenten prayer intentions that was posted on the parish website.