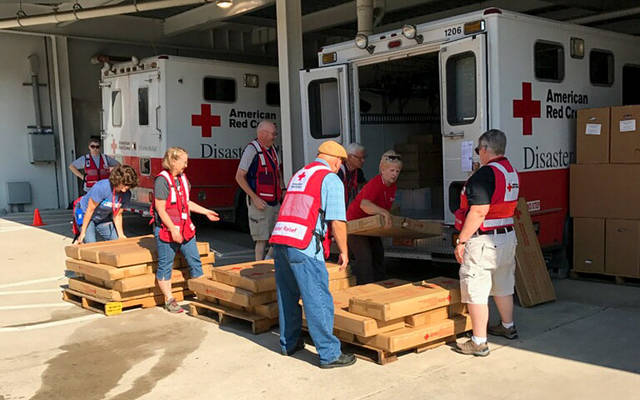 There’s much to do in big metropolises like Houston, New Orleans and New York City, as Lee Campfield knows firsthand.

Except that when she has arrived in those cities, it hasn’t been for sightseeing.

Campfield, a member of Blessed Trinity/St. Patrick parishes in Tioga County, has logged approximately 50 volunteer missions with the American Red Cross over the past two decades. Her latest effort occurred Aug. 25-Sept. 8, when she traveled to Houston to help in the aftermath of Hurricane Harvey.

“I feel fortunate that I’m able to go. A lot of people that I know would love to go, but they have families or can’t get off from their jobs,” said Campfield, who has done relief duty for the Red Cross since retiring in 1997 as a longtime physical-education teacher at Vestal High School in Broome County.

In Houston, Campfield served as a coordinator of emergency response vehicles (ERVs) — high-tech trucks that enable workers to quickly provide food, water and supplies to victims of disasters. She was part of an operation that, according to statistics provided by the Red Cross, activated nearly 200 ERVs in response to Harvey and partnered with other relief organizations to serve more than 1 million meals and snacks while sheltering more than 37,000 families.

The massive hurricane affected several parts of Texas and Louisiana, leaving at least 70 people dead and causing losses estimated as high as $200 billion. Much of the devastation occurred in Houston, the fourth most populous city in the United States, which was beset by unprecedented flooding.

“The situation down there is not good, and it’s going to take a couple of years to come back. It’s so flat (in Houston), and they had 40 inches of rain that had nowhere to go. The rain just kept coming down and coming down,” Campfield said Sept. 9, the day after she returned home. “It’s a mess, it’s a mess.”

Campfield was among a number of volunteers with the Red Cross’ Southern Tier Chapter that mobilized to Texas. Her work days were long — typically shifts of 12-plus hours — as volunteers did their best to assist residents affected by what Brock Long, administrator of the Federal Emergency Management Agency, has said is likely the worst disaster in the state’s history. The combination of Harvey and Hurricane Irma — which tore through Florida in early September — distinguishes 2017 as the first year in which two Category 4 hurricanes are known to have made landfall in the United States.

Campfield’s two-week hitch in Houston occurred primarily behind the scenes, but on a day off she took an eye-opening tour of some of the city’s badly affected neighborhoods.

“It almost makes me cry, because you see years of toil out on the front lawn,” Campfield said, referring to reams of furniture and other possessions that have been transformed into trash due to flooding. She recalled seeing one resident in tears — surprisingly, tears of happiness: despite her home being destroyed, the woman managed to recover intact a photograph of her son’s eighth-grade graduation.

Witnessing disaster scenes is nothing new to Campfield, a Tennessee native who attends St. Margaret Mary Church in Apalachin. Among her other mission trips with the Red Cross were to New York City following the Sept. 11, 2001, terrorist attacks, and New Orleans after Hurricane Katrina hit in 2005. She also volunteered in both 2006 and 2011 when her own Southern Tier area was afflicted by flooding.

“I love it,” Campfield said of her Red Cross work. “I do it because it makes me feel good to help people — if you bring a smile to someone’s face and bring a meal to them and they say, ‘Oh, thank you, I haven’t eaten in two days.’”

Another cherished aspect of disaster relief, she said, is seeing folks put their differences aside to unite in the face of a crisis.

“You know what? People are good,” she said, remarking that recovery efforts in Houston represented, for her, a refreshing contrast to the massive social and political unrest in this country.

“I think everybody’s looking for something where we can all work together, because everything’s being pulled apart,” Campfield commented. “We need a wake-up call somewhere.”