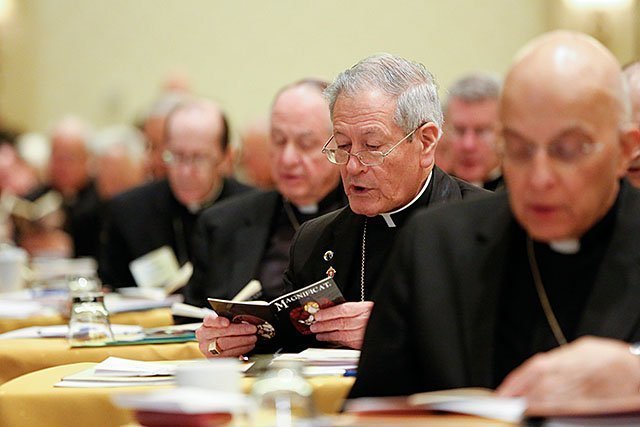 Members of the U.S. Conference of Catholic Bishops pray before the second day of proceedings at the bishops' annual fall meeting Nov. 12 in Baltimore.

BALTIMORE (CNS) — The first U.S. edition of the Roman Missal in Spanish moved closer to being available perhaps next year, as the U.S. bishops Nov. 12 approved several steps toward adapting the Mexican Misal Romano for use in this country.

The translation of the missal will have Mass propers for the U.S. calendar, and could be published as soon as fall of 2014.

In other liturgical matters, the bishops approved a translation of the Order of Confirmation and adaptations for the Order of Celebrating Marriage, after a short debate over whether the word "marriage" should be replaced throughout with the word "matrimony."

The Spanish version of the Roman Missal will become the only version authorized for use in the United States. Currently, priests or bishops choose a Spanish edition from among any version approved for use by any country’s bishops’ conference.

There was almost no discussion among the bishops about approving the Misal Romano from Mexico as the core text for use in the United States before they voted. It passed 193-11, with four abstentions. The propers that will be used to adapt the missal include U.S. celebrations such as the Fourth of July and Thanksgiving as well as U.S. saints’ feast days and at least one feast day associated with each country of Latin America.

A bit of discussion ensued about when to use the Spanish translations of U.S. place names in the adaptations to the missal before that item was approved by a vote of 200-1, with one abstention.

Bishop Anthony B. Taylor of Little Rock, Ark., said the Misal Romano seemed to be inconsistent as to whether it referred to U.S. places by Spanish or English names. Auxiliary Bishop Octavio Cisneros of Brooklyn, N.Y., who chairs the subcommittee on Spanish liturgy for the divine worship committee explained that some translated names are routinely used, such as "Nueva York" for New York, while others, such as Pittsburgh, in the proper for Blessed Francis Xavier Seelos, are not.

The Mexican edition of the Misal Romano, being released this November, is based on the 2002 Latin version of the third typical edition, the translation that became the basis for the English version of the Roman Missal introduced for use in the United States two years ago.

With the USCCB’s acceptance of the adaptations for the Mexican Misal Romano, they now will be sent to the Vatican for approval. Since the main text has already been approved by Rome, putting the adaptations together with an already finished missal should be relatively easy, Bishop Cisneros told Catholic News Service in October.

He explained that there is no international Spanish-language counterpart to the International Committee on English in the Liturgy, which oversees English translations used worldwide. Still, not every Spanish-speaking country produces its own missal translation, largely because of the resources it takes, Bishop Cisneros said. Mexico and Spain each has their own, while Argentina’s is a collaboration with Chile and other southern South American countries. Colombia’s was a joint project with Ecuador.

Elsewhere, the bishops’ conferences choose one, perhaps adapting it with propers for saints and other national observances. This is what the USCCB agreed to do. Once the U.S. edition of the Misal Romano is available, that will be the only Spanish translation approved for U.S. use.

Bishop Cisneros told CNS the U.S. Misal Romano could be ready as soon as fall of 2014.

A more protracted discussion over liturgical items among the bishops arose over another translation issue, when Bishop Thomas J. Paprocki of Springfield, Ill., proposed swapping out the word "matrimony" for "marriage" throughout the English translation of the Order of Celebrating Marriage. The rite also is a translation from the 2002 Latin revision.

Making the point on the floor of the bishops’ annual assembly for the second time in two days, Bishop Paprocki argued that "matrimony" is a better translation of the Latin word "matrimonium." He proposed using "matrimony" throughout the text, partly in recognition that amid the fast-changing societal support for same-sex marriage, it would be useful in distinguishing the sacrament of matrimony from the secular concept of marriage.

Bishop Paprocki said "matrimony" is "a perfectly good cognate" for "matrimonium." A footnote in the Order of Celebrating Marriage explains the rationale of using "matrimony" to describe the sacrament, while "marriage" refers to married life or the marriage celebration.

"I understand the rationale" for using both words, said Bishop Paprocki. But as a "tsunami of cultural change" increasingly uses the word marriage to define relationships that are not recognized by the church as having the same meaning as the sacrament of matrimony, he said, sticking with "matrimony" "would be more helpful in making the distinction of what we really mean."

Bishop Paprocki said that after he raised the issue the previous day, he received an email from a pastor who said the distinction would be helpful in catechetical situations, such as to help distinguish the church’s teaching from civilly accepted situations. He gave the example of a child who wants to know why a classmate has two daddies who are married if the church says marriage can only be between a man and a woman.

"I understand the committee’s desire not to surrender the word ‘marriage,’" Bishop Paprocki said. "But the fact is the word has been co-opted."

New Orleans Archbishop Gregory M. Aymond, who chairs the Committee on Divine Worship, said the committee considered at length whether to use only the word "matrimony" in the rite, but decided it was important to continue to use the terms almost interchangeably.

"Marriage" and "matrimony" mean a vowed commitment of one man and one woman, said Archbishop Aymond. To do as Bishop Paprocki suggested "could be construed that we were admitting defeat and accepting the civil definition of marriage," he said.

After a motion to use only the word "matrimony" in the document failed on a strong voice vote, a second vote was taken on making the title use the word "matrimony." A close voice vote meant the bishops took an electronic vote and the motion by Bishop Paprocki passed by a vote of 115 to 95.

Archbishop Aymond said the change would have to be approved by the Vatican as well.

Brief discussions before the bishops approved the Order of Confirmation were held on unsuccessful amendments proposing two modifications.

One would have replaced phrasing about "fear of the Lord" with "wonder and awe." The other would have restored as optional a rubric allowing a slap on the face during the confirmation rite.

The Order of Confirmation was in the end approved in a vote of 213-1.