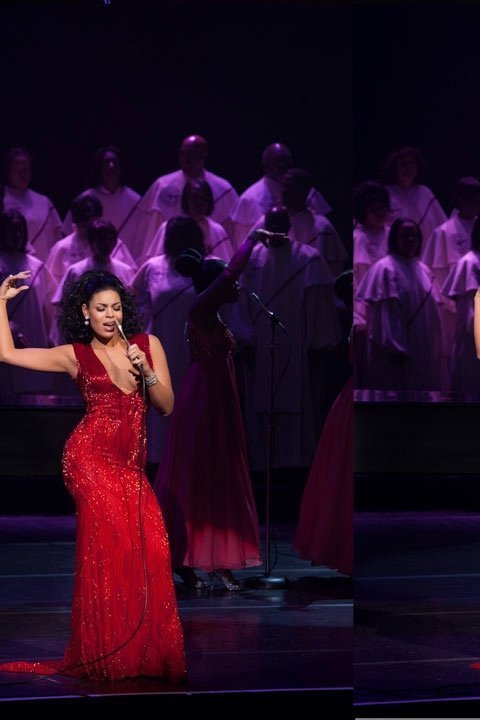 NEW YORK (CNS) — "Sparkle" (TriStar) is a soundtrack album packaged as a motion picture. But since this is evidently a point of pride for the filmmakers, take it as an observation, not a criticism.

This remake of the 1976 melodrama about a girl trio, set in 1968 Detroit, manages to be both as predictably familiar as your grandmother’s living room and as subtle as a runaway freight train. More overwrought and stale dialogue you’ve seldom heard. But the charisma of the performers and the consistently expressed desire of all the principal characters to lead moral lives hold the enterprise together.

Director Salim Akil together with his wife, screenwriter Mara Brock Akil, creates a grittily authentic, pulsating period club scene. There are skinny ties on the men, bouffant hairdos on the women; everyone smokes cigarettes wherever and whenever they choose. And we’re shown the precise moment in which wearing an Afro became a political statement.

The three Anderson sisters are Sparkle (Jordin Sparks), a talented songwriter too shy to sing leads; aggressively sexual Sister (Carmen Ejogo), who yearns for a show business career as a way to get out of her dead-end job at a department store; and Dolores (Tika Sumpter), who also sees performing as a means to an end. In her case, the goal is to earn enough money to pay for medical school.

Their mother, Emma (the late Whitney Houston in her final role), had attempted a music career when younger. Embittered by her failure, she tries to keep her daughters toeing the line with a church-centered life. They have to conduct their club adventures on the sly.

Everyone takes different paths to their respective dreams, and for a brief time, it even appears that Emma might have succeeded in keeping all of them off the stage.

Sister ditches the struggling Levi (Omari Hardwick) to marry the abusive Satin (Mike Epps), a comedian who has built a career telling racist jokes to white audiences. He beats Sister and gets her hooked on cocaine. Dolores finds scholarships for med school, while Sparkle continues to receive gentle encouragement from boyfriend Stix (Derek Luke).

But decision-making processes and "big" conversations do not appear. Situations simply change, either for better or worse, and the audience has to fill in the rest. Shunted to the side is a clergyman, the Rev. Bryce (Michael Beach), who ought to have advice to give, but doesn’t.

Sparkle’s strongest argument to her mother is, "Why did the Lord give me this gift if he didn’t want me to use it?"

The film builds to the time-honored conclusion of all show-business tales, demonstrating that it’s possible to maintain moral standards and reach one’s potential — and with stunning high notes, too.

Houston’s hauntingly emotional rendition of the gospel classic "His Eye Is on the Sparrow," performed in church, is about as nice an epitaph for the singer as anyone could wish.

The film contains marital violence culminating in a homicide, cocaine use, sexual banter, several racial epithets and a fleeting scatological reference. The Catholic News Service classification is A-III — adults. The Motion Picture Association of America rating is PG-13 — parents strongly cautioned. Some material may be inappropriate for children under 13.