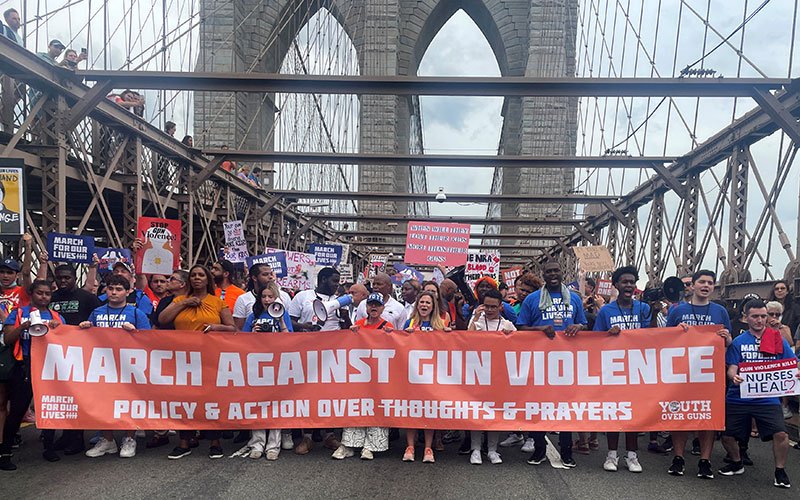 People in New York City cross the Brooklyn Bridge June 11, 2022, as they participate in the March for Our Lives rally, one of a series of nationwide protests against gun violence. (CNS photo/Eric Cox, Reuters) 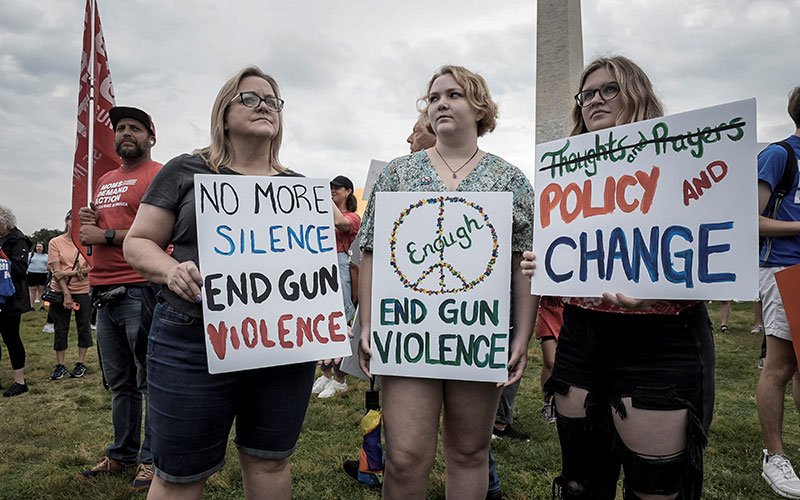 Demonstrators in Washington hold placards as they take part in the March for Our Lives raly June 11, 2022, one of a series of nationwide protests against gun violence. (CNS photo/Ken Cedeno, Reuters) 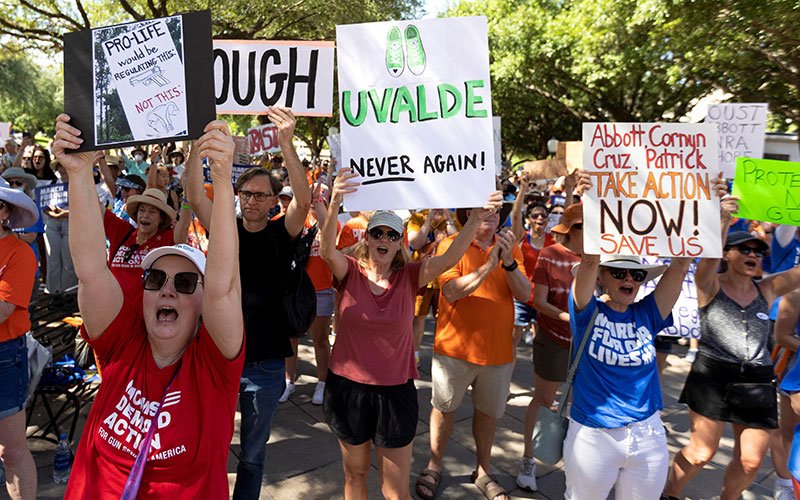 People in Austin, Texas, are seen during a March for Our Lives rally June 11, 2022, one in a series of nationwide protests against gun violence. (CNS photo/Nuri Vallbona, Reuters)

WASHINGTON (CNS) — The son of Ruth E. Whitfield, the oldest victim of the racially motivated mass shooting at a Buffalo, New York, grocery store, told a rally in Washington June 11 that the nation needs to “lower” its weapons and “replace the hate.”

“If you listen closely, you will hear the cry” for an end to gun violence “from our loved ones in our churches, synagogues, schools and now, our grocery stores,” Raymond Whitfield told hundreds gathered near the Washington Monument for the June 11 March for Our Lives rally.

“If not now, when? When will enough be enough … (of) hollow-point bullets tearing through the flesh of the American dream?” he said.

He asked how many more will be “lying dead on the floor of a grocery store,” like his 86-year-old mother, whose last hours were spent protecting others and “pleading in aisle nine.”

“When will enough be enough where law-abiding Americans demand from our public servants … common sense gun laws? Simple background checks?” Whitfield said. “What is it that we really want? We want a chance to heal.”

Whitfield also said, in reference to the Buffalo mass shooting, that America must heal it’s “most festering scar” — white supremacy. “It is time that we all come to see what the U.S. Department of Homeland Security has labeled the number one threat from sea to shining sea,” he said.

The number of mass shootings

On May 14 in Buffalo, Peyton Gendron, an 18-year-old gunman, opened fire in a Tops supermarket, killing 10 Black people and injuring three others.

On June 1, a gunman identified as Michael Louis, 45, killed four people at a medical building on the campus of St. Francis Hospital in Tulsa, Oklahoma, before killing himself.

Other mass shootings have followed in the days since. As of June 13, the Gun Violence Archive said the U.S. has had 267 mass shootings this year. The Washington-based nonprofit defines a mass shooting as an incident in which four or more people are shot or killed, excluding the attacker.

The incidents have renewed calls for regulating the public’s purchase of weapons with a high capacity for killing human beings. The U.S. Conference of Catholic Bishops has continually asked for such gun control.

On June 12 NPR reported that a bipartisan group of Senate negotiators said they had reached agreement on a package of safety and gun-related measures narrowly focused on preventing future shootings similar to the one in Uvalde.

The proposal has not been written into legislation yet, NPR said, “includes money to encourage states to pass and implement so-called ‘red flag’ laws to remove guns from potentially dangerous people, money for school safety and mental health resources, expanded background checks for gun purchases for people between the ages of 18 and 21 and penalties for illegal straw purchases by convicted criminals.”

The March for Our Lives demonstration in Washington was an event organized by students of Marjory Stoneman Douglas High School in Florida, which experienced a mass killing of its own in 2018.

More than 400 other March for Our Lives events took place around the nation and world during the June 11-12 weekend.

During the rally on the National Mall in Washington, when speakers called for a moment of silence for the shooting victims in Uvalde, a man near the stage caused a few seconds of chaos and fear when he could be heard shouting “I am the gun” into the crowd, while also throwing an unidentified object.

WUSA Channel 9, Washington’s CBS-TV affiliate, said a speaker up at the microphone at the time yelled into the crowd “Do not run!” in an effort to keep people from panicking. The agitator was quickly apprehended by police and escorted from the rally. No weapons were found, said the TV news report.