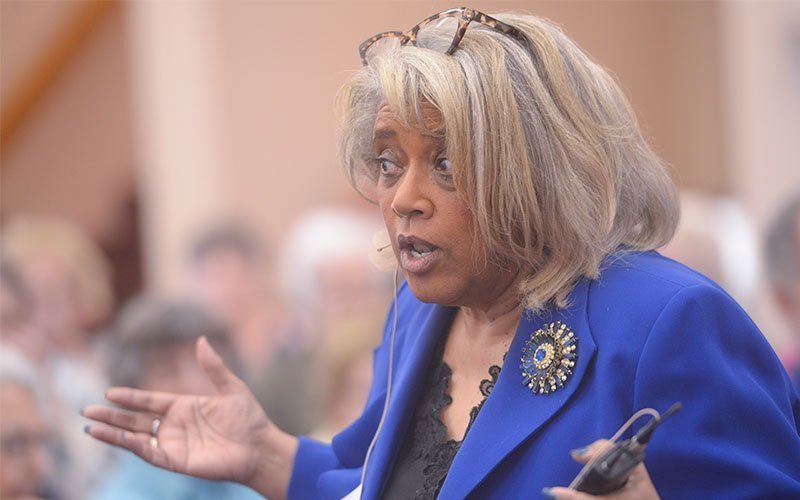 CANANDAIGUA — The Catholic Church has the obligation to address the sin of racism, according to Gaynelle Wethers, keynote speaker at the Diocese of Rochester’s 2019 Social Ministry Conference.

This obligation stems from the church’s teachings and documents, said Wethers, a lifelong Catholic who has served in a number of roles in the local Catholic community, including in previous years as pastoral associate at Immaculate Conception Parish and principal at St. Monica School, both in Rochester.

“I didn’t say responsibility, I said obligation, through its documents, to change the course of this nation,” Wethers told those in attendance at the conference, which took place May 2 at Notre Dame Retreat House in Canandaigua.

The conference, titled “Open Wide Our Hearts: the Enduring Call to Love,” was inspired by U.S. Catholic bishops’ November 2018 pastoral letter of the same name. Through this letter, the U.S. bishops speak out against racism, and this letter is the most recent of the documents to which Wethers referred.

Racism is present when a person holds his or her own race or ethnicity superior to others — either consciously or unconsciously — and therefore judges those of other races or ethnicities as inferior and unworthy of equal regard, Wethers said during her keynote. In their pastoral letter, the bishops said racist acts are sinful because they violate justice, she said.

The pastoral letter is beautiful, Wethers said, noting that she would still like to the church’s leadership do more to denounce racism.

“Every time something (racist) happens in this nation, the bishops should be out there say, ‘This is what sin looks like.’ The silence is killing us,” said Wethers, who was both the founding director of the Multicultural Affairs Department at Nazareth College and strategist and campaign manager for Rochester Mayor Lovely Warren.

The people in the pews also need to take action against racism, Wethers added.

She said there is hope, however, noting that individuals have the power to bring about change and “make the pastoral letter come alive.”

“It can sometimes be in small ways, but it also can be in large and measurable ways,” Wethers said.

One effective way to bring about change is to write letters to elected representatives, she said, encouraging them to consider the needs of “the other” when they make policy.

“When I speak to politicians, I say to them, ‘You are a servant of the people, and you are stewards of the resources. You don’t own that money, and I’m going to make sure you’re not in office if you don’t do it correctly by the people,” she said.

“How do we change how we think? That’s a tough one. I started with this years ago. I started not driving home the same way ‚Ä¶ to change how I was thinking, because we get real comfortable,” Wethers remarked.

That idea was brought up again later in the afternoon during a workshop about hospitality, led by Matt Griffin, director of agency services and nutrition for Food Bank of the Southern Tier, and Marcus Ebenhoe, director of advocacy and social ministry at Rochester’s Catholic Family Center.

For staff and volunteers at a food pantry, for example, thinking differently about their service might mean making a conscious effort to see the people they serve not as clients, but as neighbors and people who have choices, dignity and freedom, Griffin said. One way to do this is by taking the time to talk with the guests, rather than just serving them, Ebenhoe added.

“I find that to be true hospitality, where you’re there to make sure that everyone is welcome, that someone doesn’t just slip in and slip out and feel unrecognized. Really what we all want in our lives is to feel recognized, to be acknowledged as having this dignity,” he said.

Wethers encouraged those who take up these efforts to keep at it, even if at first it feels uncomfortable.

“Keep doing it. Don’t stop, because they’ll see that you’re constantly present with them. It just takes time. We’re creatures of habit, let’s just face it, but we have to change,” Wethers said.