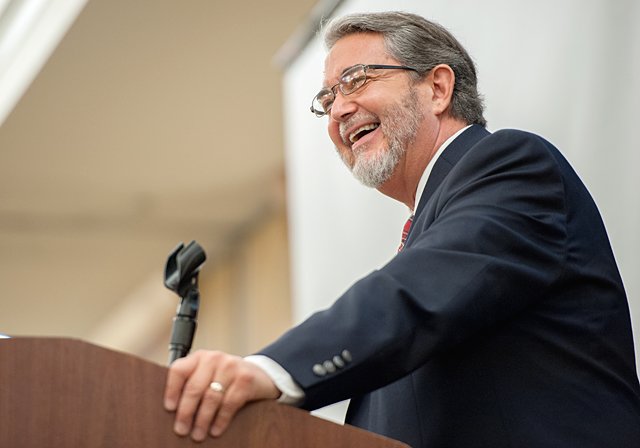 Dr. Scott Hahn, an author and professor at the Franciscan University of Steubenville, speaks during the Gathering of the Ministerium May 4 at the DoubleTree by Hilton Hotel in Henrietta.

HENRIETTA — As ministers who spread the Catholic faith in many ways, attendees at the diocesan Gathering of the Ministerium were well-suited for a presentation on the new evangelization.

A crowd of approximately 350 heard Dr. Scott Hahn stress that evangelization efforts initiated at the Second Vatican Council must still take high priority 50 years later. He said the 1990s are often described as a peak time for the movement, but that it was in no way meant to subsequently tail off.

"Was the new evangelization done? No, it had barely begun," said Hahn, who serves as professor of biblical theology and new evangelization at Franciscan University of Steubenville, Ohio. He gave his keynote address May 4 at the DoubleTree by Hilton Hotel.

The new evangelization seeks to spur Catholics toward actively kindling and rekindling the faith in others, particularly people who are unchurched, who have fallen away from the faith and who seek to grow in their faith. Hahn noted that the word "evangelization" came up often during Vatican II, and that in the ensuing years Blessed Paul VI became the first-ever pope to evangelize by visiting other continents. Those efforts, Hahn added, were continued by St. John Paul II, who traveled even more extensively; Pope Emeritus Benedict XVI, who in 2010 established the Pontifical Council for Promoting the New Evangelization; and now Pope Francis, who is so adamant about evangelizing that Hahn quipped, "As one friend said, it’s like the new evangelization on steroids."

Participants in the diocesan Gathering of the Ministerium fill a banquet hall at the DoubleTree by Hilton Hotel May 4.

The term "new evangelization" was first used by St. John Paul during his historic trip to Poland in 1979. Although Hahn acknowledged that evangelizing efforts have been going on since the beginning of Christianity, he said the current movement is considered new "precisely because of the need to re-evangelize the dechristianized."

Hahn offered several suggestions for carrying out the new evangelization. He emphasized sharing one’s personal faith with others, quoting Blessed Paul’s 1975 apostolic exhortation Evangelii nuntiandi ("Evangelization in the Modern World"), No. 41: "Modern man listens more willingly to witnesses than to teachers, and if he does listen to teachers, it is because they are witnesses."

This witnessing can take place, Hahn said, in any setting — the neighborhood, the workplace, your children’s sporting events, gatherings with friends. Hahn said it doesn’t matter so much how eloquently one’s faith is articulated, but rather how it is acted out.

"It really is the way we live our lives. What each and every one of us can do is this: enjoy being Catholics," he said. "It is a joy that others are going to find irresistible."

Hahn, in addition to his teaching duties at Franciscan University, is a popular Catholic speaker across the country and the author of several books — some of which have been perused by Rochester Bishop Salvatore R. Matano.

"I have found them extremely helpful in my ministry, both as a priest and as a bishop," Bishop Matano said in his introductory remarks May 4.

Hahn’s appearance at the 12th Gathering of the Ministerium continues a trend of well-known Catholic speakers who have keynoted the annual get-together, which is organized by St. Bernard’s School of Theology and Ministry. The event was started by Bishop Emeritus Matthew Clark as a means to unite priests, deacons, women religious, pastoral administrators, pastoral associates, catechetical leaders, youth ministers, hospital chaplains, campus ministers, prison chaplains, Catholic-school principals, migrant ministers and others with leadership responsibilities around the Diocese of Rochester.