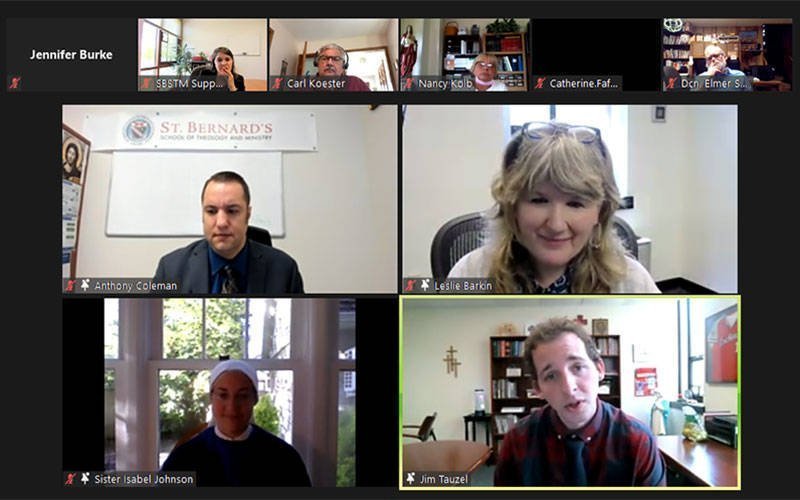 The Diocese of Rochester’s 16th-annual Gathering of the Ministerium took place virtually May 20. (Courier screenshot by Jennifer Burke)

Racial unrest. Deep political division. The clergy sex-abuse scandal, and the resulting litigation and diocesan bankruptcy proceedings. And of course, a global pandemic. These trials have made for a very challenging year for local Catholics, according to Lisa Lickona, the keynote speaker at the Diocese of Rochester’s 16th-annual Gathering of the Ministerium.

“It may well be that this is the darkest time any of us can remember in the church in upstate New York,” remarked Lickona, who resides in Cortland, which is part of the neighboring Diocese of Syracuse.

All hope is not lost, however, Lickona continued.

“When things seem darkest … God is rising up new saints among us. In adversity, in moments of suffering, God sends saints,” she said.

Lickona was speaking May 20 to more than 90 people who serve in various leadership roles throughout the Diocese of Rochester, including in its parishes and schools. The annual Gathering of the Ministerium was instituted in 2005 by Bishop Emeritus Matthew H. Clark and hosted by St. Bernard’s School of Theology and Ministry. It was cancelled last year due to the pandemic but returned this year, albeit as a virtual gathering held via Zoom.

The theme of the virtual gathering was “Solidarity and Communion: Serving God and Neighbor in Pandemic Times.” Bishop Salvatore R. Matano kicked off the event by thanking those present for their faithful ministry to their fellow Catholics over the past few months, noting the many sacrifices they made during the pandemic to serve the family of God.

Indeed, those carrying out the work of diocesan and parish ministries and Catholic schools are “the unsung heroes of our church,” agreed Lickona, who is editor for saints at Magnificat Inc. Before she began writing for the national publication, Lickona had viewed saints’ lives as “a catalog of Christian best practices,” or “a recipe for Christian life,” she said during her keynote.

As she delved into the details of the saints’ lives in order to write essays on them for Magnificat, she learned of the failings, fears and sufferings that made the saints human. What made the saints extraordinary was not so much their special talents or holiness, but the fact that they opened themselves up completely to God and allowed him to do great things through them, she said.

“I really started to look at myself. I started to see that what held me back was precisely this notion about what it was to be good, to be holy, and the idea that it all relied on what I was doing,” Lickona said.

This understanding crystallized for her one day while on a walk with a friend, whose 5-year-old daughter kept jumping from rock to rock as they walked. The child’s game seemed to be a metaphor for the way Lickona had been living her life, she explained.

“The rocks in my life were a moment. I went to Mass, I prayed with my kids, I did good deeds, I prayed the rosary. Those are wonderful things, but the space in between the rocks was the rest of my life — my failings, my fumblings, my sufferings,” she said. “I only felt that I was relating to God when I was trying.”

The saints, however, understood that God was present not only when they were doing good things, but also — and even more profoundly so — when they were failing or suffering, she said. The saints offered the good and the bad, the entirety of their lives, to God, but people today often struggle with this concept, Lickona said.

“We see faith as kind of a sideline, a hobby, something that’s going on on the side. I think it’s really important that we grasp hold of this idea that our whole life can be an offering to God,” she said. “That’s really when things are going to start to change in our culture. When we live that way, there’s going to be a response in the culture.”

The saints’ lives were not without challenges. St. Patrick was kidnapped and sold into slavery, St. Damien of Molokai died of leprosy, and St. Mary MacKillop was excommunicated twice and was known to cry herself to sleep, Lickona said. Like the saints, today’s Catholics face many trials.

“For us it’s COVID, parish closures, financial strain, the difficulties we have in our own lives and we see every day in the families we are trying to serve,” Lickona said. “Offering all the difficulties and the mistakes, the missteps, to the one who loves us, this can be our prayer. Today we can offer ourselves to God. We can offer him our hearts’ weary trials. We can open our hearts to him.”

After Lickona’s keynote, three panelists shared some of the challenges they faced in their ministry in the face of the pandemic, as well as several of the unexpected bright spots that emerged.

Leslie Barkin, interim director of the diocesan Office of Evangelization and Catechesis, talked about how she and her staff began conducting weekly Zoom calls with parish catechetical leaders and youth ministers. They built strong relationships, and together the diocesan and parish staffs learned how to evangelize through technology, she said.

“We’ve been able to provide important pastoral care during a difficult and unusual time,” Barkin said. “We’ve really gotten back to that heart of what ministry is all about, not just creating the program and making sure there’s follow-through with the catechesis.”

Sister Isabel Johnson, SM, said she and her team at the Newman Center at Oregon State University worked one-on-one with students and helped them see how they could put their faith into action, even during a pandemic.

“What we try to encourage them to do is live out your faith where you are, with your family. Whatever good you can do where you are, do that,” said Sister Johnson, pastoral associate at the Newman Center.

“I really feel like the gas that’s been in the tank the entire time has been our students,” he said. “Their joy … it’s really contagious and keeps us going and showing up every day, because we do it for them.”

The teachers have done a good job, he said, citing January diagnostic tests that showed 70 percent of the schools’ students had already met their growth goals for the 2020-21 school year. And early registration figures seem to indicate many of the families who chose Catholic education for the first time this year, thanks to the schools’ ability to offer in-person learning, will send their children to Catholic schools again next year, Tauzel said.