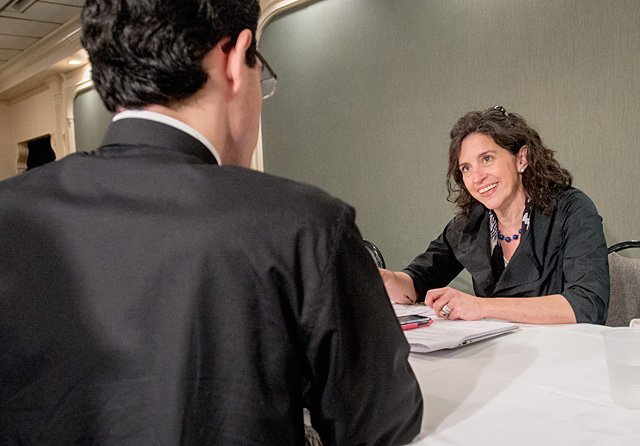 Helen Alvare (right) speaks with seminarian Anthony Amato during the Gathering of the Ministerium June 23 at Burgundy Basin in Pittsford. Alvare, one of the nation's most prominent pro-life advocates, was the keynote speaker for this years event.

PITTSFORD — As a law professor and nationally recognized Catholic speaker and author, Helen Alvaré has much to say about the ongoing struggle to preserve Catholic values and religious freedom in this country.

She brought her views to the Rochester Diocese June 23, serving as keynote presenter at the Gathering of the Ministerium at the Burgundy Basin Inn. The 11th-annual event, attended by more than 325 people who serve in various ministerial capacities around the diocese, was coordinated by St. Bernard’s School of Theology and Ministry.

Alvaré began her presentation by exploring the term "sexual expressionism," which she defined as "the position that the law should not only defer to, but actually give legal rights to, any self-named sexual identity that involves a consensual sexual act."

Noting that same-sex marriage, contraception and abortion work against procreation and are prohibited by Catholic Church teachings, Alvaré chronicled how such acts have nonetheless gained growing public support over the past 50 years as reflected in the passing of several key federal and state laws.

Since the 1960s, Alvaré said, "a very aggressive development" has taken place culturally. Now, people who are denied same-sex marriage, contraception and abortion are viewed as victims of discrimination; men are perceived as repressing and taking charge of women’s sexual expression; and a woman’s fertility is cited as being the greatest obstacle to her happiness and personal freedom.

As a result of the spread in sexual expressionism, Alvaré said, religious institutions today find themselves threatened by legislation forcing them to provide health insurance covering contraception; and businesses are vilified when they refuse to become involved with same-sex weddings due to religious beliefs.

In the second half of her presentation, Alvaré addressed "complementarity" — the concept of males and females working in harmony, particularly in marriage and family life, by acknowledging both their similarities and differences. Alvaré said critics decry complementarity as casting women in limited, inferior roles to men. Yet she pointed out that Popes John Paul II, Benedict XVI and Francis have addressed this topic extensively and have all affirmed that men and women are completely equal before God.

Alvaré, who teaches law at George Mason University in Virginia, said she firmly believes that Catholic and Christian principles on marriage and family are still deeply held by most Americans, while the weakening of these institutions due to so-called women’s rights has done much more harm than good — particularly to women themselves, as well as their children.

"When adults do not fold children into their thinking about sex and marriage, the children suffer," she said.

Yet Alvaré noted the difficulty of voicing Christian ideals in the current societal and political climate, saying that such beliefs "are regularly ridiculed" and as such, many are afraid to speak up. Nonetheless, she challenges Catholics to turn the tide of public sentiment by promoting and living out the virtues of marriage and parenting between a man and a woman.

"When we go into this conversation we have to hold all the cards — faith, reason and personal witness," she said.

Sitting on the dais throughout Alvaré’s presentation June 23 was Rochester Bishop Salvatore R. Matano, who told the audience that her talks "are indeed timely," remarking that in modern times every teaching of the church seemingly encounters criticism, questioning and/or rejection.

In introducing Alvaré, Bishop Matano described her as "an extraordinary gift among us, with a wealth of knowledge and ability to convey her message with such clarity and charity in her service for the church."

Alvaré, 54, has been married for 30 years and has three children. She has previous ties to this diocese, having graduated from Cornell University Law School in Ithaca; she also holds a master’s degree in systematic theology from Catholic University of America. She has served the United States Conference of Catholic Bishops as well as the Vatican in numerous pro-life and pro-family capacities. Alvaré will be a keynote speaker at the World Meeting of Families in Philadelphia this coming September, which also will be attended by Pope Francis.