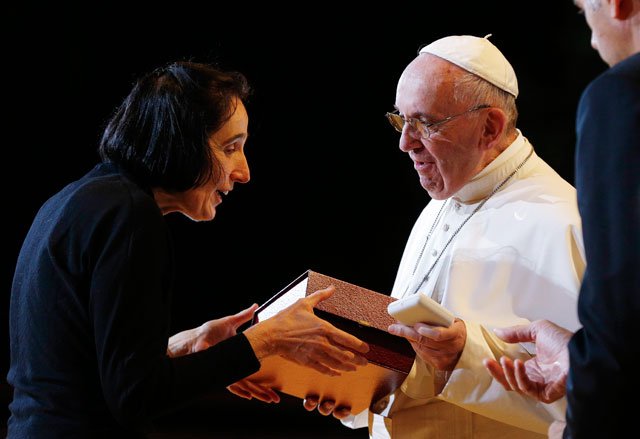 Dr. Gianna Emanuela Molla, daughter of St. Gianna Beretta Molla, greets Pope Francis at the Festival of Families during the World Meeting of Families in Philadelphia Sept. 26.
By Laura Ieraci
Catholic News Service
PHILADELPHIA (CNS) — Couples facing infertility need not only to hear that others understand their heartbreak, they need to feel it, too, said Cardinal Willem Eijk of Utrecht, Netherlands.
Family, friends and community members, including pastors, must do all they can to help childless couples through their suffering, the cardinal said at a session of the World Meeting of Families.
The Dutch cardinal was part of a three-person panel Sept. 24 on the theme, "Out of the Depths I Cry to You, O Lord: The Heartbreak of Infertility."
Other speakers included Dr. Gianna Emanuela Molla, the daughter of St. Gianna Beretta Molla, and Dr. Kyle Beiter, an obstetrician and gynecologist at The Gianna Center for Women’s Health and Fertility in New Jersey.
The room overflowed with participants, with dozens standing at the back and sitting on the floor in the side aisles.
Speaking in Italian, Cardinal Eijk said couples have a natural desire to generate new life, and Catholics understand this desire as a vocation to fatherhood and motherhood. But those who cannot have children experience their "involuntary infertility" as an inability to achieve their goal as a married couple and feel "guilty" and "inadequate," he said.
"It is understandable, then, that they would try to seek solutions to their infertility at any cost," he said.
Medical interventions can help find causes of infertility or correct conditions that impede fertility, such as blocked fallopian tubes, he said. Some childless couples may discover they are called to adopt, he added.
However, in vitro fertilization presents ethical problems; less than 20 percent of embryos created in IVF end in birth, he said. Furthermore, every human person has the right to be the born of a couple’s conjugal love and not as the product of a technological process, he said.
In an interview with Catholic News Service, the cardinal addressed the isolation some couples feel in their communities for being unable to have children.
Communities should "not look at (childless) couples with suspicion, but with comprehension, which is healing for them," he said.
He also affirmed the love of a childless couple, citing church teaching that the conjugal act is "both unitive and procreative."
"When there is no procreation, the unitive aspect, the sign of love, remains," he said. The couple’s "love is real and, of course, it is painful that their love is not fulfilled in procreation but, nevertheless, it remains love."
Picking up on the topic of IVF, Beiter said many couples, "out of desperation" to have children, "feel forced" into IVF treatment. They are unaware that other ethical options, such as NaPro (natural procreative) technology, exist, he said.
Developed by Dr. Thomas Hilgers, NaPro technology is based on women’s natural fertility cycles and helps women to identify the times they are more likely to conceive.
Ethical options for male infertility, such as medication to stimulate sperm production, also exist, he said.
While no fertility therapy is 100 percent successful, NaPro technology has shown to be 60 percent successful over two years, Beiter said.
Molla’s witness shifted the discussion from pastoral and scientific to spiritual in speaking about the growing devotion among couples to her saintly mother, St. Gianna.
"I want to give couples, who have not yet been able to conceive, a word of hope," she said. "Nothing is impossible for the Lord.
"Molla’s mother was diagnosed with a fibroma while she was pregnant with her. St. Gianna refused the recommended hysterectomy and abortion in
order to protect the child in her womb and died seven days after giving birth. She was canonized in 2004.
Many couples have had children after praying for St. Gianna’s intercession, Molla said. Others have been helped by St. Gianna to accept the will of God and to seek adoption or different ways to share their love, she added.
Molla said couples worldwide write to her and ask her to pray to St. Gianna that they may have a child.
In an interview with CNS, Molla said she left geriatric medicine several years ago to care for her aged father and, since his death five years ago, has dedicated her life entirely to her prayer ministry and to promoting devotion to St. Gianna.
"My mother praised and gave glory to God with her life on earth," she said. "I know now she continues to praise and give glory to God in heaven."
– – –
Follow Ieraci on Twitter: @lauraier.
Copyright © 2022 Catholic News Service, Inc. All rights reserved. Linking is encouraged, but republishing or redistributing, including by framing or similar means, without the publisher's prior written permission is prohibited.