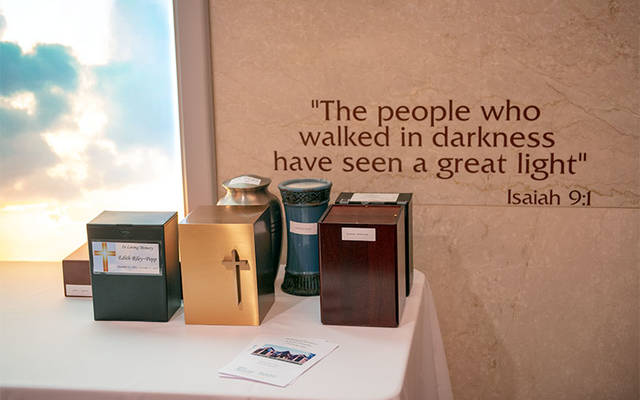 These cremated remains were interred in the St. Joseph of Arimathea Crypt at Rochester’s Holy Sepulchre Cemetery March 17. (Courier photo by Jeff Witherow)

ROCHESTER — A few years ago, a worker at Holy Sepulchre Cemetery came across two ash-filled urns under a tree.

Following unsuccessful attempts to contact the owner of the urns, the ashes were stored for a time in the office of Lynn Sullivan, Holy Sepulchre’s chief executive officer.

“We didn’t have a place to put them,” Sullivan said, noting that the urns were likely dropped off anonymously because the owner wanted the ashes to be on sacred ground but couldn’t pay to have them interred.

The dilemma spawned a community-service initiative by Holy Sepulchre, launched earlier this year: the Joseph of Arimathea Crypt, in which cremated remains are permanently placed at no cost to the deceased person’s loved ones.

The crypt was blessed during a committal service on March 17, when the remains of 10 people were interred. Located on the basement level of Christ Our Light Mausoleum at Holy Sepulchre, 2461 Lake Ave., the crypt will be the site of an another committal service on Nov. 17. The service will take place following the cemetery’s monthly Mass of Remembrance, which begins at 8:30 a.m.

In addition, on Nov. 10, a second Joseph of Arimathea Crypt will be blessed during an inaugural committal service at Holy Sepulchre’s Ascension Garden, 1900 Pinnacle Road, Henrietta. That service, likewise, will follow the monthly 8:30 a.m. Mass of Remembrance.

There is still time before both services for people who wish to have their loved one’s remains placed in either crypt. Sullivan said that those interested should contact Holy Sepulchre at 585-458-4110 or Ascension Garden at 585-697-1122 as soon as possible to arrange paperwork.

Sullivan noted that it will likely be a year before such an opportunity recurs. Committal services at the two crypts might occur more than once a year if demand becomes great enough, but she said they currently are being scheduled only each November, in keeping with the Catholic Church’s focus on that month as a time of prayer for all souls.

However, Sullivan suggested that anyone wishing to have their loved one’s ashes interred after Nov. 10 and 17 nevertheless contact Holy Sepulchre or Ascension Garden to make arrangements in advance of the next time the crypts are opened.

Father Peter Bayer, a senior priest in the Diocese of Rochester and longtime member of the cemeteries’ board of directors, is set to preside at both upcoming Masses and committal services. Father Bayer also led the first committal service in March, which took place on the feast day of Joseph of Arimathea.

The priest, a former diocesan chancellor, also originated the idea of naming the crypts in honor of the saint who gave up his own burial crypt so that the body of the crucified Christ could be interred in it. An image of St. Joseph of Arimathea holding the deceased body of Christ marks the crypt at Holy Sepulchre.

Sullivan said that the St. Joseph of Arimathea crypts are available to anyone in the Diocese of Rochester who cannot afford the cost of interring ashes, which she said typically runs at least $1,000.

“We don’t want them left with that question in their mind, that they don’t know what to do,” she said, adding that for a fee of $50, the name of the deceased person will be added to a plaque at each crypt.

Sullivan emphasized that since 1963, cremation has been permitted in the Catholic Church provided that the ashes are placed in a sacred space, thus being given the respect due to the corporeal remains of a human body. She noted that the church teaches that ashes should not be dumped or scattered, or stored in a home for an extended period of time. Sullivan also pointed out the benefits of having cremated remains interred in a mausoleum, saying this arrangement gives loved ones the comfort of knowing the ashes are being properly cared for and in a place of honor.

“You end up with a place to go and remember (the deceased),” she said.