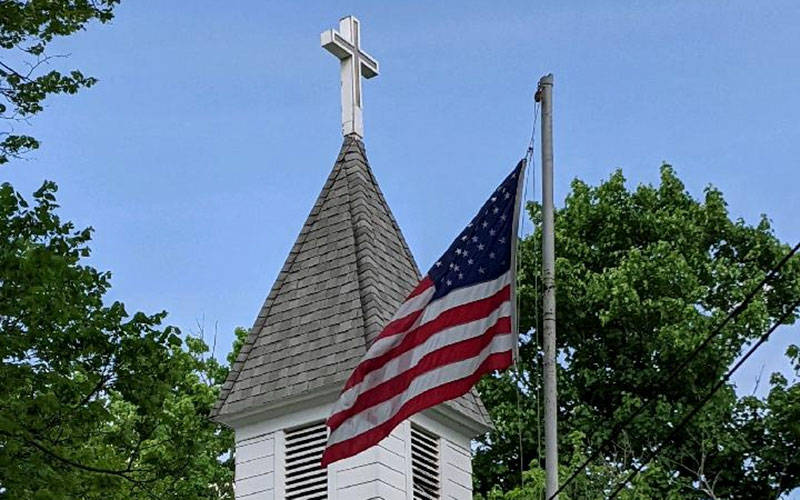 The American flag at St. Stanislaus Church in Bradford, Steuben County, is seen after being remounted to the flagpole. (Photo courtesy of Father Patrick Connor)

Flag Day on June 14 will hold special meaning this year for Bradford’s St. Stanislaus Church, thanks to the actions of local firefighters in transforming a late-winter mishap into a patriotic act of kindness.

Winds were whipping on March 12 when Father Patrick Connor, pastor of Ss. Isidore and Maria Torribia Parish, arrived at the central Steuben County church that afternoon for 5:30 p.m. Mass. As he walked by the flagpole, he noticed that the American flag wasn’t fully attached and was waving precariously. When he checked back on the flag a few minutes later, it had become completely dislodged. The church’s maintenance man, Mike Ryan, pointed to a large tree near the flagpole — and there the flag was, flailing in branches high off the ground and seemingly impossible to reach.

“I just offered a silent prayer it would stay wrapped in the branches until we could figure out something,” recalled Father Connor, whose parish comprises St. Stanislaus along with St. Joseph, Campbell; and St. Catherine of Siena, Addison.

As the 11 a.m. Sunday Mass began, the flag was still stuck in the branches. At about that time, Sherry Sanford — who serves as St. Stanislaus’ faith-formation coordinator — sent a text message to her husband, Terry, who in turn contacted her brothers-in-law, Ken and Chris Sanford, and nephew, Brett Sanford. All three are members of the Bradford Volunteer Fire and Ambulance Department, with Chris serving as chief. Sherry Sanford told the Catholic Courier that she asked if they could help retrieve the flag “whenever they would become available. I knew they would come.”

What she didn’t know was how quickly that would happen.

About halfway through the Mass, Father Connor saw the church’s front door open slowly; a man entered quietly, bent down and placed something on a chair, and disappeared. After Communion, Father Connor began telling the congregation about the displaced flag until an usher called out from the back of church, saying the item on the chair was actually the flag in question — all folded up neatly and properly.

As it turned out, Chris Sanford was the person who dropped off the flag. He and the other Sanford men had taken it down from the tree while Mass was taking place, unbeknownst to the congregation. They had driven a fire truck to the church, positioned it by the tree, raised a ladder and climbed up to rescue the flag.

“I was speechless for a moment,” Father Connor said. “We never heard any noise from the motor of the firetruck or any distraction. I asked the people to thank the Lord, and said this was an example of people serving God and country — a noble gesture on the part of these Bradford volunteer firefighters.”

The flag has been securely reattached and is now waving proudly again next to the church.

“I was so grateful this flag was saved,” Father Connor said, explaining that it is a gift from Ron and Terry Allison, parishioners at Most Holy Name of Jesus in Elmira who occasionally attend Mass at St. Stanislaus.

Father Connor also noted the deep respect he holds for the American flag, saying that it serves as a reminder of “men and women who paid the price and gave their lives for our freedom.” He added that the flag “reminds me not only of those serving now in the military, but all our veterans, especially those who may be living with the injuries from war — physical and/or emotional or mental.”