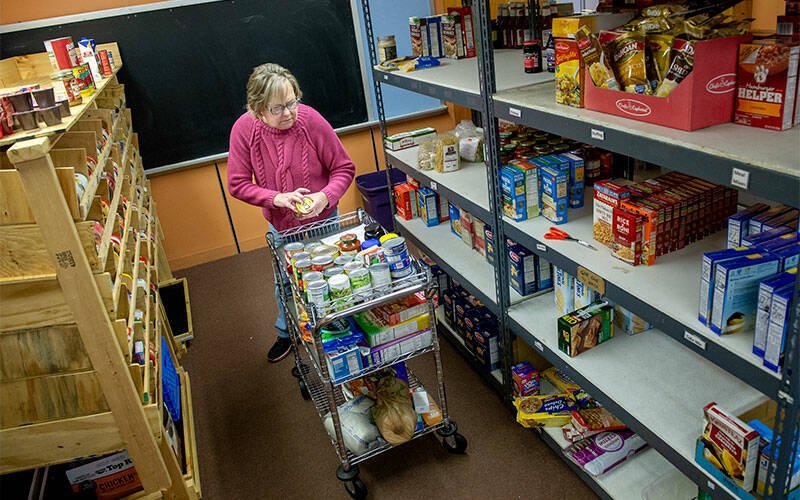 A divorced mother of five children, who asked to remain anonymous, said Spencerport Ecumenical Food Shelf has enabled her to survive the ups and downs of life.

“No matter what career you have anyone can have hard times,” she said, noting that she works full time but has struggled now and then to make ends meet. With the help of the food shelf, she said she’s been able to feed her family, and she has even received Christmas gifts from food shelf volunteers.

Bereft of financial support from her ex-husband, the woman said she never wants her children to suffer want.

She also noted that when she has extra food, she donates it to Spencerport Food Shelf.

“No family should ever feel the lack of food,” she remarked.

Last year, the food shelf receive a $1,500 Hunger Relief Grant that is funded in part with proceeds from the annual Catholic Courier/Catholic Charities Christmas Appeal. Donna Perry, chairwoman of the food shelf’s board of directors, said the funds were used to help meet the organization’s general operating expenses. Anyone who resides in the Spencerport Public School District, or who is recommended by one of the participating churches in Spencerport Ecumenical Ministries — which includes St. John the Evangelist Church — can receive free food every 60 days, she said, adding that clients vary greatly.

“I don’t know if we have typical clients,” she said. “It could be family of nine or single individuals, and it could be for any number of reasons. They could be new to the area, a family broken by divorce, someone who’s lost a job or is having vehicle problems. If you’ve got all of sudden one income, and you’re raising the children, it can be difficult to put food on the table.”

The food shelf doesn’t ask clients to provide income information, she noted, because it wants to be available to those immediately in need. On paper, a gainfully employed person might look like he or she shouldn’t have to ask for free food, but even people with jobs and seemingly stable lives can find themselves in jams, Perry said.

The food shelf, which was founded in 1999, makes about 30 deliveries per month. Food and household items are stored at Karen Baptist Church in Parma, and donations are accepted at all the churches participating in Spencerport Ecumenical Ministries.

Like food banks, soup kitchens and pantries throughout the United States, Spencerport Ecumenical Food Shelf has experienced both greater demand as well as a drop-off in support due to economic pressures over the past few years. Perry noted that she welcomes the holiday season because that’s when food drives take place.

Gospel of Matthew inspired board chair to serve the food shelf

A volunteer driver for several years before she was named board chair in 2020, Perry said Chapter 25 of the Gospel of Matthew inspired her to serve the food shelf. In that chapter, Jesus reminds his listeners that when you feed the hungry, you feed him as well.

She said it’s important for her and other food shelf workers to share the love of God with everyone who seeks assistance.

“No one is turned away,” she said.

Tags: Catholic Charities, Faith in Action, Monroe County West
Copyright © 2023 Rochester Catholic Press Association, Inc. All rights reserved. Linking is encouraged, but republishing or redistributing, including by framing or similar means, without the publisher's prior written permission is prohibited.