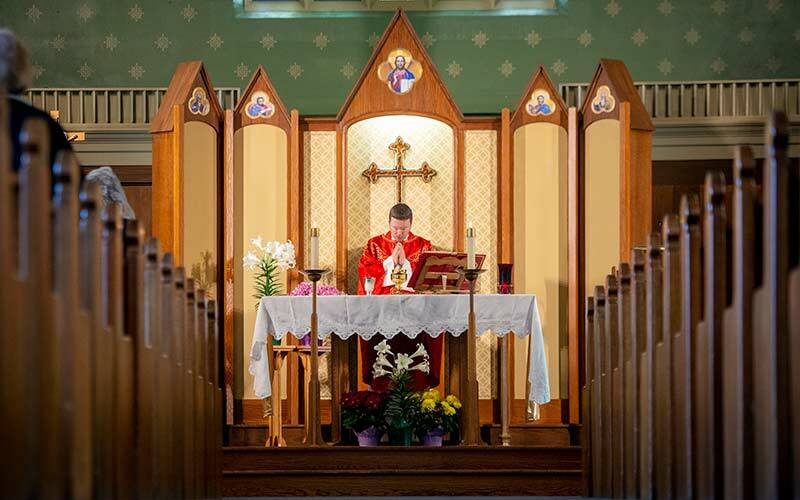 SPENCERPORT — Toward the end of a recent Sunday Mass, Father Justin Miller reminded his congregation to check their bulletins for upcoming activities.

“There’s a lot of stuff,” he remarked.

Indeed, week in and week out, St. John the Evangelist Parish offers an abundance of get-togethers. Here are some that have taken place as of late:

• A pilgrimage, to historic St. Michael Church in Rochester, was conducted April 2.

• The parish hosted a dinner on Easter Sunday afternoon, April 17, for people who might otherwise have spent the holiday alone.

• A Lenten retreat took place March 4 as well as a mission on Divine Mercy Sunday, April 24.

In the eyes of Father Miller, events such as these, mixed in with many ongoing ministries and some new ones as well, add up to a vibrant parish.

Bulletins, as well as the parish website, feature an array of offerings in the areas of social ministry, faith-sharing, prayer groups, and ministries for women and men.

“We want people to see we’re not just in existence for Saturday and Sunday Mass obligation,” Father Miller stated.

He noted that among the more recent initiatives, St. John the Evangelist now offers adoration on Thursdays and Sundays as well as Sunday-evening prayer, all of which attract “people of all ages, young and old,” he said. “We get whole families.”

Father Miller added that he puts a special focus on youth and young-adult parishioners, encouraging regular Mass attendance and empowering them to be future parish leaders. A positive sign, he said, was a St. John the Evangelist picnic last summer that attracted a number of young families — several of whom became more involved in parish life from that point forward. In addition, the parish youth group has been relaunched.

Father Miller also is a frequent visitor at Catholic Youth Organization events, where he leads prayer for players, coaches and families — both Catholic and non-Catholic — and takes part in impromptu shooting contests.

“It kind of opens doors — to let them see this priest is able to shoot baskets, to relate to them on a non-church basis,” said Father Miller, who, at age 36, is one of the youngest priests in the Diocese of Rochester. Ordained in 2016, Father Miller acknowledged that his youthful enthusiasm can be a plus for evangelization efforts.

This is Father Miller’s first assignment leading a parish. He noted that his predecessor at St. John the Evangelist, Father Peter Mottola, had launched a number of initiatives as well — but “unfortunately, COVID stopped a lot of them.” Now, Father Miller said, parishioners appear eager to embrace parish life once again as safety restrictions from the pandemic ease. For example, he said that the 155-year-old parish — which numbers slightly more than 1,000 families — has nearly returned to pre-COVID levels for its Sunday-Mass attendance.

‘An investment of love’

To continue furthering parish growth, St. John the Evangelist is in the process of hiring a pastoral minister. Among that person’s duties will be coordination of a new Discipleship Small Groups program as well as various evangelization and outreach initiatives.

Overall, as his first year in Spencerport nears its conclusion, Father Miller said he’s pleased with the results of his efforts to promote an atmosphere of spirituality and inclusivity.

“A lot of time has been invested. It’s an investment of love, I’d say,” he remarked.

Father Miller added that similar investments have been made by St. John the Evangelist parishioners — with substantial dividends already occurring.

“People are taking the faith and making it their own,” he said. “There’s something good going on here. God is at work.”