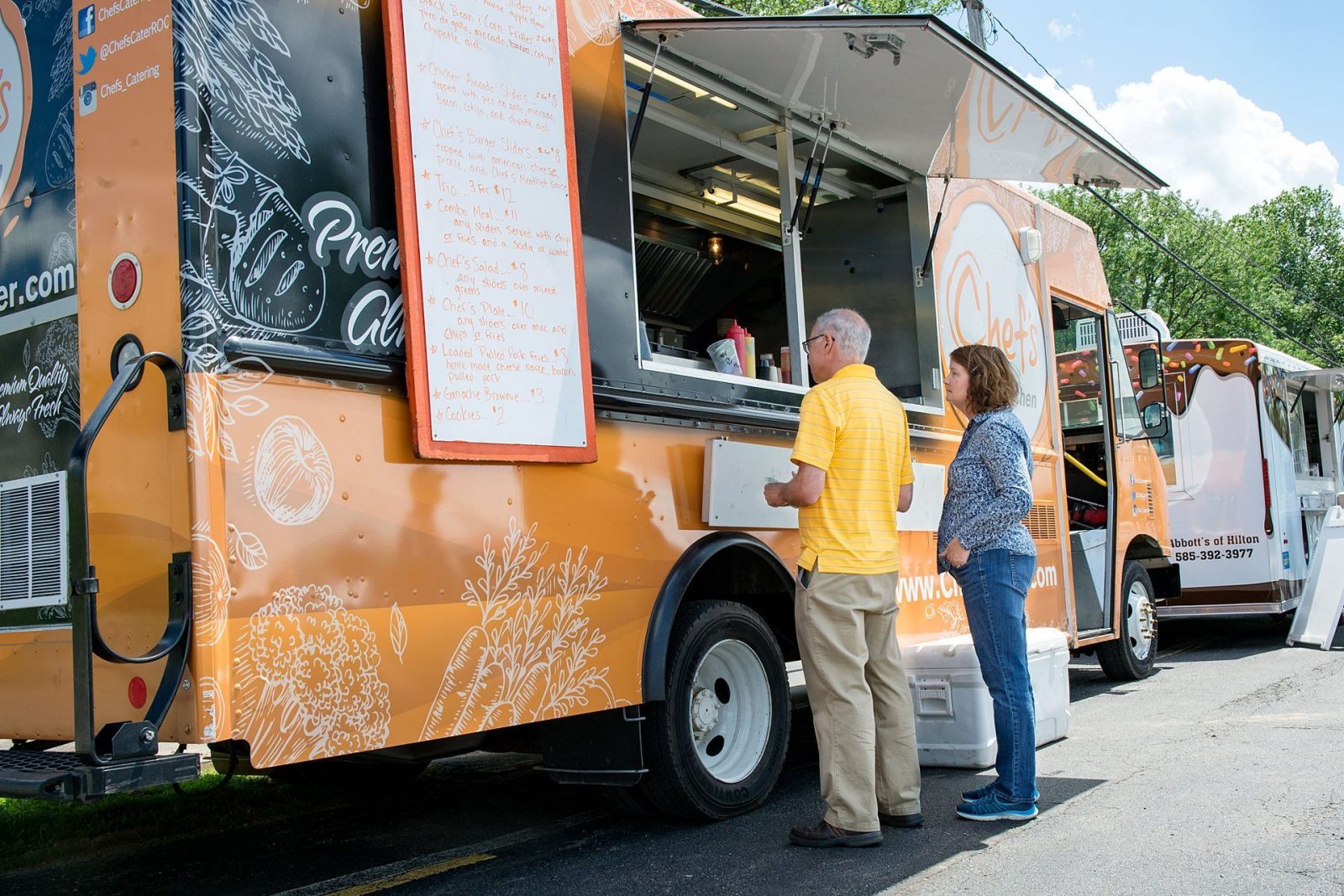 Jim and Joanne Grassi order from a food truck during the June 25 Food Truck Rodeo at Spencerport’s St. John the Evangelist Church.

The year 2017 marks the bicentennial for the Town of Ogden as well the sesquicentennial for the Village of Spencerport. Not to be outdone, St. John the Evangelist Parish is noting its own 150th anniversary, highlighting its milestone by staging a series of activities.

One of those events took place June 25 in the form of a Food Truck Rodeo, held across the street from the church at the corner of Martha and Amity streets. Lines for food vendors quickly formed following the conclusion of 11:15 a.m. Mass, as people of all ages turned out to enjoy casual cuisine, live music and multiple attractions for kids. The family-friendly event was billed as a communitywide celebration, consistent with what Father John Loncle describes as an ongoing spirit of openness among parishioners.

“One thing that strikes me is that they’re very friendly and welcoming. They take people for who they are and don’t put on a lot of airs,” said Father Loncle, who has served as pastor of St. John the Evangelist since 2012.

In keeping with this sense of welcoming, the 1,100-family parish is striving to include all area residents in its anniversary celebrations while also honoring the village and town milestones taking place this year.

“Father said, ‘Let’s bring in the people who don’t worship here so they can see what we’re all about — fun, family and fellowship,’” said Cheryl Rozzi, who for 21 years has belonged to St. John the Evangelist and served as chair of the Food Truck Rodeo.

The list of 150th-anniversary activities at the parish is a lengthy one. First up was an initiative in which parishioners offered prayers three times per day during the 50 days of Easter — a total of 150 prayer offerings — while also garnering funds for the House of Mercy in Rochester. Nearly $1,000 was raised, according to Rozzi. Then, on June, 11, a large group photo of parishioners was taken via drone.

On Oct. 8, in conjunction with the parish’s founding date, Bishop Salvatore R. Matano will celebrate a Mass of Thanksgiving at 11:15 a.m. with an anniversary banquet to follow at Whittier Party House. A booklet of parishioners’ anecdotes from over the years is being prepared for distribution at the banquet. Other activities planned for the fall include parish youths sponsoring the sale of commemorative ornaments and a concert of contemporary sacred music by Christian musician Chris Wilson.

Father Loncle said this lengthy itinerary grew out of a planning meeting in 2016, during which parishioners contributed many ideas for the anniversary year and then shouldered the responsibility of seeing them through. He remarked that their commitment is typical of the parish’s willingness to step forward whenever the need calls.

As a further example of dedication, Rozzi noted that the parish has reached its Catholic Ministries Appeal goal for five straight years, and a recently completed capital campaign for church repairs raised in excess of $1 million — more than twice the original goal.

The church, located at 55 Martha St. and known for its distinct English Gothic style, opened in 1915. Masses in Spencerport were first celebrated in 1851, in a wagon shop in Ogden Center. In 1857 a small wooden chapel went up just east of the village, and on Oct. 7, 1867 — with the area’s Catholic population rising quickly and the Village of Spencerport becoming officially incorporated — St. John the Evangelist was designated as a parish. Father Richard Story served as founding pastor, and a new church at 90 Martha St. opened in 1868 and served the parish community for the next 47 years. A parish school opened in 1927 and was replaced by a new facility in 1957 before the school closed in 2008.

Father Loncle, who is leaving St. John the Evangelist this coming November to become pastor of Rochester’s Blessed Sacrament/St.Mary/St. Boniface cluster, said he will greatly miss the many parishioners he has gotten to know.

“It’s a wonderful community,” said Father Loncle, who will be succeeded in Spencerport by Father Peter Mottola.

“We’re such a family-centered parish. I can’t even begin to tell you how close it is,” Rozzi agreed. “I absolutely love this parish.”