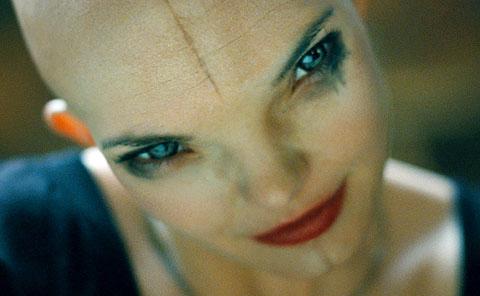 NEW YORK (CNS) — "Splice" (Warner Bros.) is an unintentionally amusing and not-very-scary horror film which reminds us, once again, that it’s not nice to fool with Mother Nature. Though its message is ambiguous, this perverse tale of genetic engineering run amok ought to win new converts to the Catholic Church’s repeated warnings that scientists should not "play God" when it comes to human cloning and procreation.

Clive (Adrien Brody) and Elsa (Sarah Polley) are partners in life and in the lab. Genetic engineers at Nucleic Exchange Research and Development (NERD for short), they specialize in "splicing" together genes from different animal species to create new life forms. Their pride and joy are "Fred" and "Ginger," bulbous blobs that may contain a new protein that will "cure" countless diseases, from Parkinson’s to cancer.

Motivated by greed as a result of their partnership with wicked pharmaceutical companies, NERD’s owners are delighted with these "designer species."

Clive and Elsa are ready for the next step — human gene splicing — to achieve "the medical breakthrough of the century," but NERD says no, citing the "moral outrage" that would ensue.

Viewers looking for moral clarity on a timely issue will find none in "Splice," which instead waffles. "If God did not want us to explore his domain, why did he give us the map?" one scientist says. Clive is conflicted; while he admits "we changed the rules," he declares, "There are some things you just don’t do!"

Elsa agrees that "human cloning is illegal," but adds, speaking of their proposed creation, "This won’t be human, entirely." She, too, cites "moral considerations," saying, "People are dying now who we can give hope to."

In fact, a lot of people (including human embryos) die in "Splice," thanks to what happens once Elsa persuades Clive to proceed with the experiment. The human hybrid result, "H-50," is initially monstrous, resembling an albino guinea pig on steroids. But soon this creature (which only consumes Tic Tacs — not a good sign) morphs into the comely Dren (Delphine Chaneac). The bride of Frankenstein never looked this good, apart from chicken legs, retractable wings and a rather deadly tail.

Dren grows up at an accelerated rate, and the inevitable mother-daughter conflicts ensue, especially when the adolescent Dren, high on hormones, turns her attentions to Clive.

No wonder Clive’s hard heart melts and he is now attracted to Dren — Elsa used her own genes in Dren’s creation. When Clive puts on the swing music and he and Dren dance their own version of Fred and Ginger, "Splice" takes a farcical turn. What follows is outrageous and often obscene, as the four credited scriptwriters display an unhealthy obsession with human-monster copulation.

Interestingly, Hollywood films like "Splice" that deal with genetic engineering and cloning are, virtually without exception, countercultural. Governments and, to a large extent, the general public may endorse the advances of genetic science, but on film the warnings are crystal clear: Don’t go there.

"Splice," however, does not wholly condemn the process or method, only the misguided result. The Catholic Church, by contrast, is unwavering on the evils of manipulating procreation by any method that involves the destruction of innocent human life or a separation of the essential unitive and procreative aspects of marital love.

Directed by Vincenzo Natali ("Paris Je t’aime," "Cube"), "Splice" borrows freely from countless horror films, including "Frankenstein," "Alien" and "Rosemary’s Baby." When Dren takes to the skies on a murderous rampage, one can only think of the flying monkeys from "The Wizard of Oz."