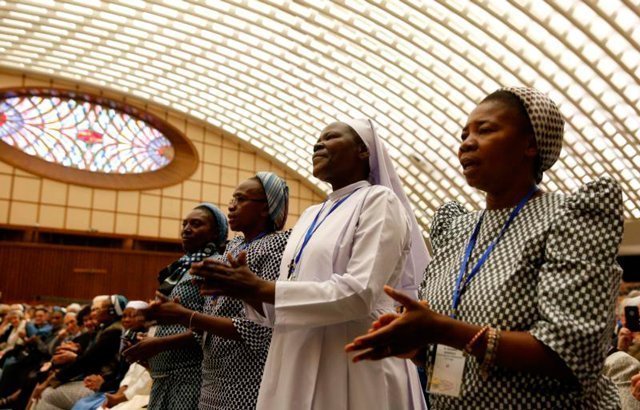 Pope Francis greets a nun during an audience with the heads of women's religious orders in Paul VI hall at the Vatican May 12. During a question-and-answer session with members of the UISG, the pope said he was willing to establish a commission to study whether women could serve as deacons.
By Cindy Wooden
Catholic News Service
VATICAN CITY (CNS) — Pope Francis "did not say he intends to introduce a diaconal ordination for women," and he certainly did not speak about the ordination of women priests, the Vatican spokesman said.
Pope Francis met members of the International Union of Superiors General, the leadership group for superiors of women’s orders, May 12 and accepted a proposal that he establish a commission to study the role of New Testament deaconesses and the possibility of women serving as deacons today.
After some news outlets reported the pope was considering ordaining women deacons and comments were made about women deacons leading to women priests, Jesuit Father Federico Lombardi issued a clarification May 13.
The spokesman insisted "it is wrong to reduce all the important things the pope said to the religious women to just this question."
Women and the diaconate "is a question that has been discussed much, including in the past, and that comes from the fact that in the early church there were women who were called deaconesses, who carried out certain services within the community," Father Lombardi said.
Pope Francis told the sisters that he thought it would be a good idea to form a commission "to take up this question again in order to view it with greater clarity," Father Lombardi said. "But one must be honest: The pope did not say he intends to introduce a diaconal ordination for women and even less did he speak of the priestly ordination of women. In fact, talking about preaching during the eucharistic celebration, he let them know that he was not considering this possibility at all."
In a video statement May 13, Sister Carmen Sammut, superior of the Sisters of Our Lady of Africa and president of the UISG, said the sisters "were quite excited by the fact that Pope Francis did not leave any question out; he really wanted to answer each of our questions.
"He was very strong about the fact that women should be in the decision-making processes and the decision-making positions of the church," she said.
"About the diaconate," she said, the sisters "had proposed that there would be a commission. He accepted that proposal and has said that he would bring that forward so that it could be studied even more than it has already. And I hope that one day there will be a real decision about this."
Copyright © 2023 Catholic News Service, Inc. All rights reserved. Linking is encouraged, but republishing or redistributing, including by framing or similar means, without the publisher's prior written permission is prohibited.