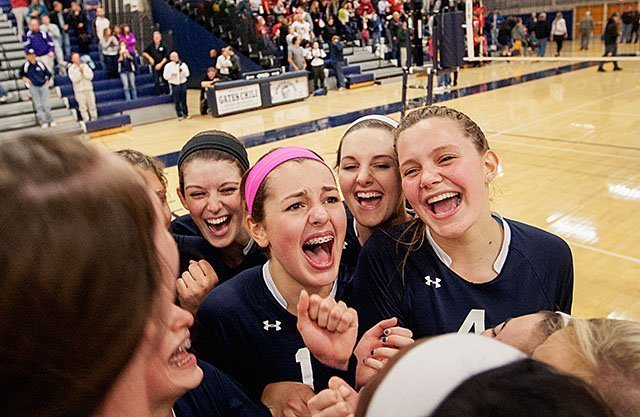 While others rake up leaves in November, several area Catholic high-school teams and athletes have established a tradition of raking in trophies.

This fall featured repeats of sectional playoff successes dating back to at least last year. Members of that distinguished list are Aquinas Institute football, which won its eighth consecutive Section 5 title and advanced to the state-championship game; Our Lady of Mercy girls’ volleyball, which earned its third straight Section 5 crown and also reached its third state final in a row; and Mercy golfer Christine Schmitt, who won her fourth consecutive individual Section 5 title to add to her status as defending state champion.

The Little Irish won 19-6 over Elmira of Section 4 in their state Class AA semifinal game on Nov. 23. AQ overcame fierce wind and snow at Sahlen’s Stadium in Rochester in a battle of undefeated teams, raising its record to 12-0 thanks to two rushing touchdowns by Luch Pietropaolo and a TD pass from Jake Zembiec to Marcus Conner.

AQ had reached the state’s final four with a 48-34 win over Jamestown of Section 6 in quarterfinal play on Nov. 16. Zembiec led the way by throwing for 313 yards and four touchdowns — three to Donato Clemente — and rushing for two more TDs.

Prior to states, top-seeded Aquinas cruised to its eighth straight sectional crown with a 50-6 thumping of No. 3 Rush-Henrietta in the Class AA final on Nov. 9 as Pietropaolo and Clemente each scored twice. That was preceded by a 28-7 semifinal won over No. 4 Pittsford on Nov. 2, with Clemente scoring all four touchdowns. In sectional quarterfinal action on Oct. 25, AQ won 41-7 over No. 8 Webster Thomas behind Zembiec’s four scoring passes.

Mercy’s bid to defend its state crown fell short as it lost 15-25, 25-21, 15-25, 19-25 to Baldwinsville on Nov. 17 in a rematch of last year’s state finalists. Sisters Terese and Hannah Cannon represented Mercy on the all-tournament team.

Schmitt’s victory qualifies her for the state tournament, where she is defending champion, to be played in June 2014. She won her first state title last spring in record fashion, shooting rounds of 72 and 71 at The College Course at Delhi for a one-under-par total of 143 to win by six strokes. Her score was the lowest in state-tournament history. Schmitt’s excellent showing also helped Section 5 capture first place in sectional team scoring.