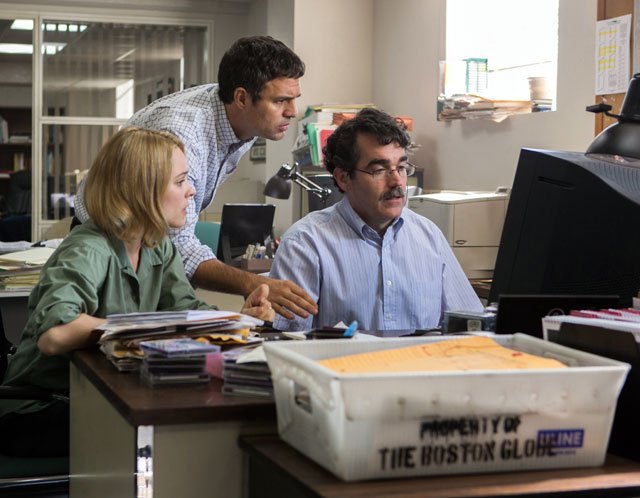 Rachel McAdams, Mark Ruffalo and Brian d'Arcy James star in a scene from the movie "Spotlight." The Catholic News Service classification is A-III -- adults. The Motion Picture Association of America rating is R -- restricted. Under 17 requires accompanying parent or adult guardian.
By John Mulderig
Catholic News Service
NEW YORK (CNS) — The clergy abuse-themed drama "Spotlight" (Open Road) is a movie no Catholic will want to see. Whether it’s a film many mature Catholics ought to see is a different question entirely.
This hard-hitting journalism procedural — which inescapably invites comparison with 1976’s "All the President’s Men" — recounts the real-life events that led up to the public disclosure, in early 2002, of a shocking pattern of priestly misconduct within the Archdiocese of Boston. In the process, the equally disturbing concealment of such wrongdoing on the part of high ranking church officials also was laid bare.
One of the picture’s themes is the way in which Beantown’s inward-looking, small-town mentality contributed to the long-standing cover-up. For the supposed good of the community, locals suppressed the knowledge of what was happening, subconsciously choosing not to see what was transpiring just behind the scenes.
So it’s appropriate that the whitewash begins to peel away with the arrival of a stranger to the Hub, the newly imported editor of the Boston Globe, Marty Baron (Liev Schreiber). Marty’s outsider status isn’t just based on his geographical origins; he’s also Jewish.
Perplexed that his paper has devoted so little attention to the earliest cases in what would become, over time, an avalanche of legal actions against clerics, Marty commissions the investigative unit of the title, which specializes in in-depth investigations of local stories, to dig deeper.
Led by even-keeled Walter ‘Robby’ Robinson (Michael Keaton), the Spotlight team — which also includes tightly wound Mike Rezendes (Mark Ruffalo), intrepid Sacha Pfeiffer (Rachel McAdams) and relentless research whiz Matt Carroll (Brian d’Arcy James) — uncovers a widespread and sickening scandal involving scores of clergymen and hundreds of young victims.
Director and co-writer Tom McCarthy maintains a taut rhythm as he focuses primarily on the dogged professionalism required to breach the walls of secrecy surrounding a respected, and therefore protected, institution. And his script, penned with Josh Singer, apportions blame across a broad spectrum that includes the Globe itself — John Slattery plays veteran editor Ben Bradlee Jr., whose semi-willful blindness to the problem typifies the attitude discussed above.
Like most of his colleagues, Slattery is a former Catholic, distanced from, but not — initially at least — embittered toward, the faith in which he were raised. Witnessing the further fraying of the reporters’ already fragile ties to the church adds to the overwhelming sense of grief Catholic viewers will feel throughout "Spotlight." Yet this generally accurate chronicle can provide them with a valuable insight into one of the darkest chapters in ecclesiastical history.
The movie is open to a few criticisms, large and small, however. The portrayal of Boston’s then-archbishop, Cardinal Bernard Law (Len Cariou), is predictably negative. But it also includes details that are subject to interpretation.
Thus Cardinal Law’s gift to Marty of a copy of the "Catechism of the Catholic Church" is treated as a both a religious and social snub. Yet Cardinal Law played an important role in translating that landmark text into English, so his gift may have been motivated more by a sense of pride in one of the most significant accomplishments of his career than by a desire to cut the newcomer down to size.
Much more significantly, the screenplay’s uncritical adoption of the results of research conducted by ex-priest A.W. Richard Sipe (a figure heard but not seen) opens its analysis to legitimate questioning.
The thesis that the scandal was the inevitable outcome of the Latin church’s tradition of priestly celibacy — a discipline Sipe maintains is routinely violated by fully half the clergy, thus creating a culture of secrecy among them — is ill-founded, to say the least. To dispute that theory, however, is not at all to downplay the horrifying nature of what unfolds under this otherwise painfully illuminating "Spotlight."
The film contains mature themes, multiple, sometimes coarse, references to perverse sexual acts, several uses of profanity as well as a few rough and numerous crude terms. The Catholic News Service classification is A-III — adults. The Motion Picture Association of America rating is R — restricted. Under 17 requires accompanying parent or adult guardian.
– – –
Mulderig is on the staff of Catholic News Service.
Copyright © 2023 Catholic News Service, Inc. All rights reserved. Linking is encouraged, but republishing or redistributing, including by framing or similar means, without the publisher's prior written permission is prohibited.