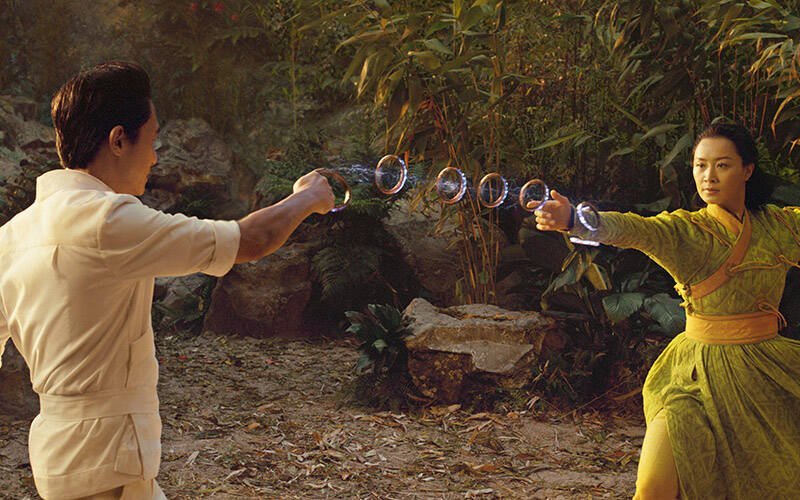 Tony Leung and Fala Chen star in a scene from the movie “Shang-Chi and the Legend of the Ten Rings.” (CNS photo by Marvel Studios)

A treat for grown-ups, the film is too laden with extra-biblical ideas to be recommended for impressionable moviegoers. As for older teens, they’ll likely shrug off its overly-elaborate mythos as so much window dressing.

Together with his best friend and co-worker Katy (Awkwafina), mild-mannered, ambitionless San Francisco parking valet Shaun (Simu Liu) leads a contented — if directionless — life, partying, staying up late and going nowhere professionally. So when a group of thugs try to steal the amulet he always wears around his neck, and he responds with a magnificent display of fighting skills, Katy is left incredulous.

Her amazement only deepens on learning that Shaun is, in fact, the superhero of the title, trained from his youth to be a semi-supernatural warrior.

For all of Shaun’s prowess, however, the bad guys — agents of his ruthless China-based gang leader father, Wenwu (Tony Leung) — did, in the end, succeeded in purloining the talisman, a cherished gift his late mother, Li (Fala Chen), gave him before she was murdered by a band of her husband’s enemies. So, with Katy in tow, it’s off to the homeland Shaun abandoned decades before to get away from his dad.

There, Shaun is once again embroiled in family tensions, including the resentment his younger sister Xialing (Meng’er Zhang) continues to harbor over his abandonment of her in childhood. Since she’s as gifted a combatant as her sibling, moreover, Xialing knows how to make her wrath felt.

Behind all the bloodless action that follows lies a basic story of good versus evil. The plot gains moral subtlety, however, from the fact that, although he’s acting under a delusion, Wenwu’s latest scheme, which his children eventually come together to oppose, is fueled by grief and the desire to be reunited with his spouse rather than by any wicked intention.

Along with vocabulary unsuitable for kids, the script, penned in collaboration with Dave Callaham and Andrew Lanham, presents viewers with ideas — such as centuries-old Wenwu’s quasi-immortality — that might confuse those inclined to take them seriously. Additionally, a briefly touched-on theme of honoring the fallen is marked by no sense of hope in an afterlife.

Given everyone’s preoccupation with battling as well as the nature of Shaun and Katy’s bond — a friendship that barely skirts the outer edges of romance — there’s no sexual element to the picture. Instead, it’s all jaunty dustups and derring-do. And, if human interest is briefly lost amid the outsized special effects of the climactic confrontation, it’s skillfully recaptured via a wry wrap-up.

The film contains frequent stylized violence, nonscriptural religious ideas, at least one use of profanity, a few milder oaths, about a half-dozen crude terms, a couple of crass expressions and an obscene gesture. The Catholic News Service classification is A-III — adults. The Motion Picture Association rating is PG-13 — parents strongly cautioned. Some material may be inappropriate for children under 13.