Spy Kids: All the Time in the World in 4D - Catholic Courier 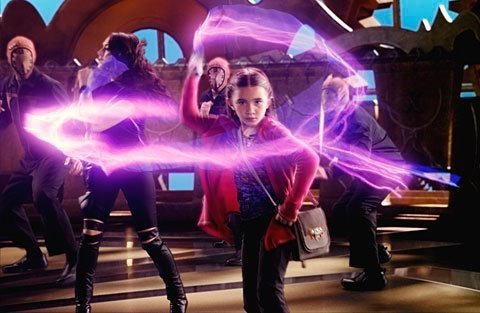 NEW YORK (CNS) — Had your fill of 3-D movies? Take a whiff of "4D," otherwise known as "Aroma-Scope," now, um, airing in "Spy Kids: All the Time in the World" (Dimension). This third sequel to 2001’s "Spy Kids" offers viewers the chance, via a scratch-and-sniff card, to "smell" the action as they watch (in 3-D) our young heroes — and their parents — fight to save the world.

While the gimmick is reminiscent of "Smell-O-Vision" in the 1960s and John Waters’ notorious use of "Odorama" in 1982’s "Polyester," the scents this time are much more innocent, ranging from bacon, blue cheese, and candy to — inevitably — burps and other gaseous effusions (both of which, however, turn out to smell like candy as well).

Once the country’s top agent for the OSS (Organization of Super Spies), Marissa Wilson (Jessica Alba) is now retired, her alter ego a secret to her family. Her husband, Wilbur (Joel McHale), is a hapless TV reporter who tracks down — whom else? — spies, but without much success. Marissa’s precocious stepkids, Rebecca (Rowan Blanchard) and Cecil (Mason Cook), don’t give her the time of day.

Marissa also has a new baby girl to contend with, one who’s especially challenged when it comes to bodily functions (cue the seemingly requisite toilet humor).

Marissa is called back into service when the wicked Timekeeper (Jeremy Piven) threatens to unleash Project Armageddon, the "ultimate weapon" that takes away all the time in the world. While he’s undeniably a villain, Timekeeper’s message nonetheless hits home: "You’re all guilty of wasting time on mindless pursuits instead of spending time with each other and the things that really matter," he declares.

Her true identity revealed, the stepmom is suddenly very cool to the younger generation, and Rebecca and Cecil also join the struggle as Spy Kids, members of the "elite juvenile division" of the OSS. They’re assisted by Argonaut (voice of Ricky Gervais), a talking robot dog whose ability to expel bombs from you-know-where comes in handy.

As they learn to work together as a family to rescue humanity, the Wilsons discover that time is a precious commodity that must be used wisely.

"Spy Kids: All the Time in the World in 4D" is written and directed, with a winning sense of fun, by series creator Robert Rodriguez.

The film contains light comic-book action and mildly rude humor. The Catholic News Service classification is A-II — adults and adolescents. The Motion Picture Association of America rating is PG — parental guidance suggested. Some material may not be suitable for children.