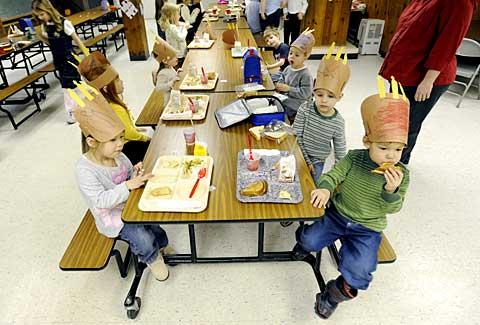 Based on overwhelming success from a last-ditch fundraising drive, St. Ann School in Hornell has gained Bishop Matthew H. Clark’s approval to remain open for at least the 2010-11 school year.

According to Lisa Dirlam, principal, the school had raised more than $133,000 in pledges and donations as of Feb. 25, with a majority of that in cash and additional donations arriving daily. Dirlam added that a newly formed development board under the leadership of Randy Regan, a St. Ann School parent, was key to securing the necessary money to continue operating the prekindergarten-through-grade-6 school, which has almost a 150-year history in Steuben County.

"Everyone at St. Ann School is extremely thankful for the support of this group," Dirlam said, adding that the school’s thanks also extend to "Our Lady of the Valley Parish, the surrounding community, friends and alumni."

The fundraising drive was precipitated by a letter dated Nov. 20, 2009, to Our Lady of the Valley parishioners from Father Peter Anglaaere, pastor. It stated that if either $120,000 wasn’t raised or student enrollment for 2010-11 didn’t increase from 85 to 115 by Jan. 15, 2010, Father Anglaaere would recommend closure of the school. His letter was based on declining enrollment that had led to staff cuts and the cessation of St. Ann’s seventh and eighth grades at the beginning of 2009-10.

The diocese subsequently granted St. Ann School a deadline extension to Feb. 15. Shortly after that date, with the financial goal having been reached, Father Anglaaere petitioned Bishop Clark for the school to stay open.

Anne Willkens Leach, diocesan superintendent of schools, said she’s amazed at the effort put forth to raise significant funds in such a short period of time — and that Dirlam and Regan in particular deserve "a big congratulations."

"The fact this little community pulled together — I am tickled, I am thrilled," Leach said. "This is what we love to see. It gives hope that Catholic schools are alive and well."

Willkens Leach observed that Bishop Clark’s approval was granted on a year-to-year basis, and that — like all diocesan schools — St. Ann School will need to show sustainability each subsequent school year. Yet she expressed optimism for St. Ann’s future, citing schools in other small-town communities — such as St. Michael in Penn Yan and St. Patrick in Owego — that have stabilized in the face of challenges similar to those of St. Ann.

"Seeing this growth is extremely encouraging," Dirlam added. "I am grateful to our current families for showing their faith in us by enrolling their children so early as well as registering new families."