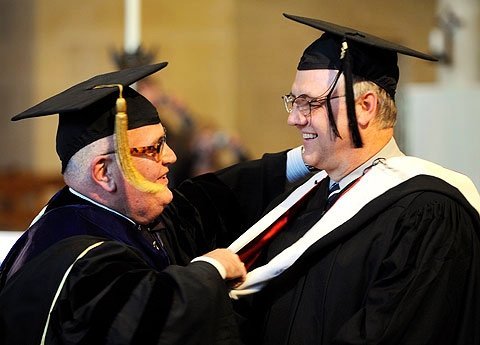 The annual commencement ceremony for the 33 graduates of St. Bernard’s School of Theology and Ministry May 11 at Sacred Heart Cathedral marked both an ending and a beginning.

In terms of an ending, Bishop Matthew H. Clark — who was awarded an honorary doctorate of divinity at the ceremony in recognition for his leadership and contributions to lay and ordained ministry — noted that the 2012 graduation could be the last in which he is present as Bishop of Rochester.

Bishop Clark told the gathering that he must submit his resignation on July 15, which is his 75th birthday. The resignation will be accepted immediately, but will not be effective until his replacement is named, he noted, adding that he does not know when that could take place.

In terms of beginning, the graduation capped the first year that St. Bernard’s has offered instruction in the Diocese of Syracuse. The school expanded into that diocese in 2011.

Keynote speaker Father James P. Lang, episcopal vicar for parishes for the Diocese of Syracuse, told graduates that God has entrusted the era of churches to them.

That trust is especially important as the contemporary Catholic Church in the area appears to be transitioning from the parish system into a new structure, such as multiple parish ministry, he said.

"In a time when the common story is being reknit, when the world seeks a common voice, common focus, common sense and common unity, we disciples stand in the breach of the evolving, ‘what’s next?’" Father Lang told graduates.

Speaking before the commencement, Father Lang said over the years there had been a number of conversations about St. Bernard’s opening a satellite campus in the Diocese of Syracuse. After Bishop Robert J. Cunningham became bishop of the Syracuse Diocese in 2009, the conversations yielded agreement to open an extension site on the campus of LeMoyne College.

Students in the Diocese of Syracuse also are able to travel to one of St. Bernard’s other satellite sites for classes in the Rochester Diocese: Apalachin, Auburn, Hornell or Watkins Glen.

The Syracuse program, which is wrapping up its first year, has drawn about 13 to 14 students, and Father Lang said he thinks demand will pick up as more people become aware of the St. Bernard’s training.

The Diocese of Syracuse offers faith formation and training for catechists, as well as training for permanent deacons, but lacked a formation program for theology, Father Lang said.

"Theological formation is essential for pastoral leaders so their understanding is more global into the sacred tenets of Scriptures, but also the methodology of pastoral care," he said before the commencement.

The availability of theological training also may lead to strengthened requirements for some positions, said Laura Hamilton, director of advancement for St. Bernard’s. She noted that the Diocese of Rochester, for instance, asks its permanent deacons to complete a master’s degree. Several of the May 11 graduates are in formation for the permanent diaconate.

Albany Bishop Howard Hubbard said that St. Bernard’s establishment in the Diocese of Albany nearly two decades ago has been a tremendous blessing for that diocese, and he thanked his longtime friend Bishop Clark for helping to bring about that connection.

Bishop Hubbard encouraged the graduates to develop two qualities: evangelical daring and prayer. He cited Archbishop Oscar Romero and Blessed Teresa of Kolkata as two people who lived out the first attribute, and he quoted Catholic theologian Karl Rahner in encouraging the second attribute.

"There is only one road that leads to God; it is prayer," Bishop Hubbard said, quoting Rahner. "If someone shows you another, you are being deceived."

The breadth of coursework that students complete at St. Bernard’s allows them to provide for the pastoral needs of people at area parishes, including prayer, noted Cathy Kamp, a pastoral associate at St. Joseph Parish in Penfield.

"I think it also provides the theological and scriptural formation to be able to offer the things people are seeking: adult education, Bible study, bringing people together in faith-sharing groups," Kamp said.