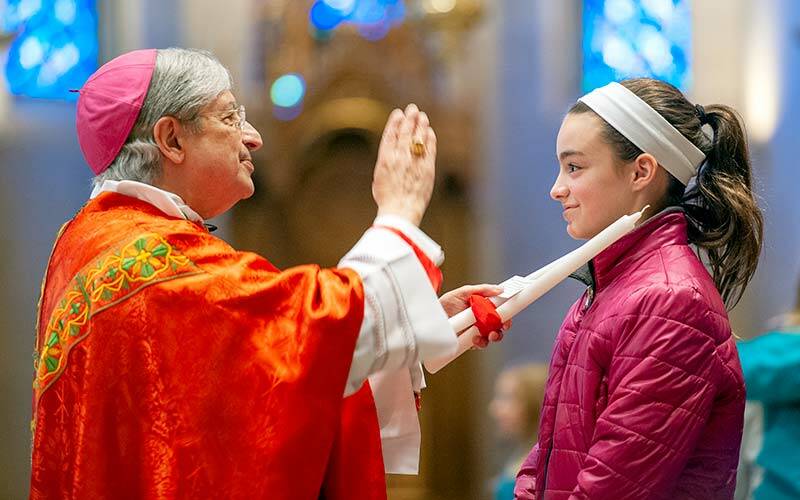 EDITOR’S NOTE: This is the second installment of the Catholic Courier’s new feature series “Why Do Catholics … ?” which aims to answer questions about what Catholics do and believe.

Could you use some physical and spiritual comfort? At this time of year, you might find it in a long-standing custom associated with a saint from the fourth century.

Feb. 3 is the feast of St. Blaise, which will be noted in many parishes around the Diocese of Rochester with the traditional Blessing of the Throat on or near the feast day.

The ritual consists of a priest, deacon or other designated individual placing two crisscrossed candles around or near a person’s throat while invoking the intercession of St. Blaise; giving a blessing against diseases of the throat and other ailments; and making the sign of the cross.

In some settings, a group blessing may be issued without the use of candles as an alternative to individual blessings.

At Spencerport’s St. John the Evangelist Parish, throat blessings in honor of St. Blaise will be offered after the 8 a.m. Mass on Thursday, Feb. 3.

Father Justin Miller, the parish’s first-year parochial administrator, noted that candles being used for that ritual were to be blessed Feb. 2 — the feast of the Presentation of the Lord. Also known as Candlemas, that day falls 40 days after Christmas and marks Mary and Joseph’s presentation of Jesus at the Temple in Jerusalem, as described in Luke 2:22-38.

The candles “represent the light of Christ being presented in the Temple and throughout the world,” Father Miller told the Catholic Courier.

Although throat blessings on the feast of St. Blaise are primarily related to physical afflictions, Father Miller observed that taking part in the ritual also can bring spiritual healing — particularly as Catholics cope with various challenges from the COVID-19 pandemic.

“Many have found, in the time of coronavirus, such a throat blessing to be a consolation and a source of graces,” he said.

Catholics’ devotion to St. Blaise can be traced to the saint’s reputation as a bishop and doctor in Armenia during the fourth century. Tradition relates that he performed a number of healing miracles on people and wild animals, including once saving a boy from choking to death on a fish bone. That episode is the basis for the church’s present-day throat blessings.

St. Blaise was martyred in the year 316 for refusing to renounce his Christian faith to Agricola, the governor of Cappadocia. His popularity grew in the Middle Ages, especially in Europe. St. Blaise is one of the 14 Holy Helpers — a group of saints and martyrs to whom Catholics turn in prayer during times of grave affliction.

Devotion to the 14 Holy Helpers took root in mid-14th century Germany at the height of the Black Death — a plague considered the worst in human history, having wiped out as much as half of Europe’s population. Prayerful faithfulness to St. Blaise and the other Holy Helpers spread to other countries and continues to this day, nearly 700 years later.

Father Miller, who was ordained in 2016, encouraged Catholics who take part in the annual throat-blessing ritual to put their healthy throats to good use by voicing their faith.

“May the intercession of St. Blaise loosen our throats to proclaim the glorious good news of Jesus’ presence, healing and power to make us saints,” he stated.