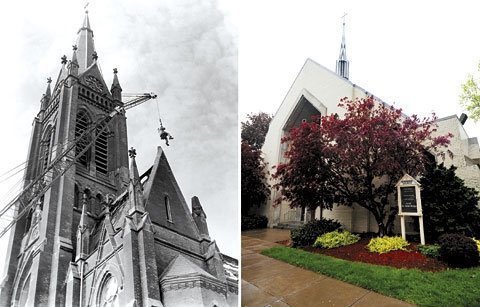 Fifty years ago, St. Boniface Parish in Rochester was poised to celebrate its centennial with a capital campaign and major renovations.

Instead, the parish experienced the darkest hour of its history.

Workers were just finishing work to install a roof on the 70-year-old Gothic church when sparks from the charcoal fire pot they were using set the new roof ablaze at 4:20 p.m. Nov. 6, 1957.

A stiff breeze fanned the three-alarm fire as a crowd of neighbors and parishioners helplessly watched it consume the Gregory Street church.

Joining the crowd were Cardinal Francis Spellman and Bishop James E. Kearney. According to news reports, Cardinal Spellman saw the fire as he flew in to Rochester about 5 p.m. for the celebration of Bishop Kearney’s 25th anniversary Mass the following day. The cardinal reportedly told the bishop upon landing that one of his churches was on fire, and they rushed to the scene.

After the fire was extinguished, the heavens showed through the skeletal remains of the roof. The church was declared a total loss, and it was demolished.

Yet within months, St. Boniface Church rose again from the ashes like a mythical phoenix. The new church featured simple, tailored architecture and was completed in a mere 10 months, allowing it to be dedicated on the centennial.

That "new building" — now 50 years old — will be the site of the church’s 150th-anniversary Mass at 10:30 a.m. Sunday, June 5. The Mass will be celebrated by Bishop Matthew H. Clark, and it will be followed by a picnic on the grounds, 330 Gregory St., Rochester.

The Mass caps a year of anniversary activities that included a chicken and biscuit dinner, a homecoming Mass, a euchre party and a chicken barbecue.

The Mass also marks several transitions for the parish, which in June is clustering with Blessed Sacrament Parish, a fellow member of the Monroe-Clinton Planning Group. St. Boniface, Blessed Sacrament and Rochester’s St. Mary Parish — the third church in the Monroe-Clinton Planning Group — will each reduce their Mass schedules by one Mass due to a reduction in priests assigned to the parishes from three to two, according to the parishes’ pastoral plan.

St. Boniface currently has two Sunday Masses at 8:30 and 10:30 a.m., but after the clustering the parish will have a single Sunday Mass at 9 a.m.

Longtime pastor Father R. Richard Brickler, who will retire in June after 28 years at the parish, said people have been very supportive and understanding of the changes. He said he doesn’t feel they will detract from the anniversary celebration.

"It still will be a nice celebration, and I think people understand why it’s happening," he said.

The parish was originally founded on May 12, 1860, to help meet the needs of German Catholics in the southeastern part of Rochester. After forming the parish, construction on the three-story building that housed the first rectory, school and church was begun; the building was dedicated a year later on June 8, 1861.

The School Sisters of Notre Dame arrived at the parish in 1866 as teachers.

Longtime parishioner Edward Sloan of Rochester still remembers attending the "old school" before it was replaced by the new building in the 1920s.

"They used to keep the desks in straight lines, and a couple (desks) had the sides carved out around poles holding up the ceiling," Sloan recalled, noting that it was a thrill to go to school in a brand-new building.

He remembered the School Sisters of Notre Dame who taught at the school.

"Probably most people know they had a tough reputation, but they were very fair," Sloan said. "They were totally in control, regardless of how tough or how smart we thought we were."

When the sisters moved out of the St. Boniface convent in the 1980s, Becket Hall, the diocesan house of discernment, occupied the building from 1984 to 2006. After Becket Hall left, the Sisters of St. Joseph began using the facility for several mission and community-living programs, including its SSJ Volunteer Corps program, which offers young adults weeklong or yearlong service opportunities.

In 1986, St. Boniface sent its seventh and eighth grades to a regional junior high at Blessed Sacrament. The K-6 school closed in June 2008 after 147 years of operation.

But the school did not sit vacant for long. In 2009, McQuaid Jesuit and the Sisters of St. Joseph opened Nativity Preparatory Academy, an independent Catholic middle school that serves needy city students. The school will expand to grades 5 through 8 next school year.

"They are good, hardworking people who have been very welcoming and very supportive," he said.

Longtime parishioner Bernice Reinhardt, whose son, Father Leo Reinhardt, is pastor of Immaculate Conception in Ithaca, noted that St. Boniface has had many active groups, including the Men’s Club, the Sacred Heart and the Rosary societies and Twilighters, the parish’s senior group.

Another active parish group is the Knights of St. John, and Reinhardt recalled the Knights and Ladies’ Auxiliary drill teams escorting newly ordained priests in processions throughout the streets of the city. Such support of the church is typical of St. Boniface parishioners, according to Father Brickler.

"They work hard for the parish, and for the honor and glory of God," he said.

Several parishioners noted that the South Wedge neighborhood around the parish has remained vibrant and has recently attracted new families moving in. That new life is one reason why parishioners are optimistic, said Paula Kirchgessner, music director of the parish who also is working on the parish’s history.