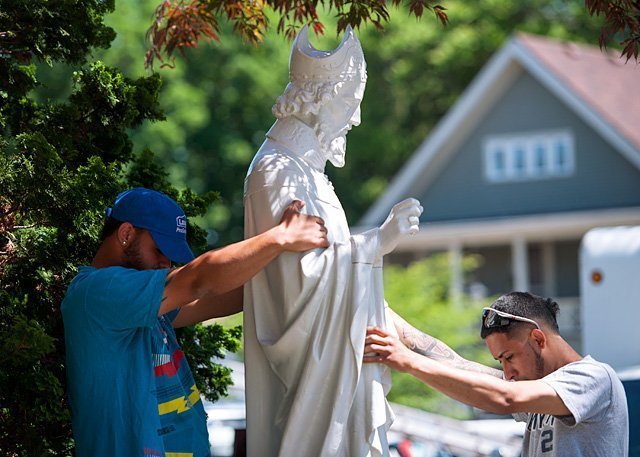 Ramon Costas (left) and Anthony Torres, workers for AAA Masonry, install a statue of St. Boniface June 3 at Rochester’s St. Boniface Church. The statue had disappeared after a fire at the church in 1957, and it was recently discovered and returned.

ROCHESTER — After being lost for 59 years, a statue of St. Boniface has finally been returned to its original home.

The statue, which disappeared after a fire destroyed St. Boniface Church in 1957, was reinstalled in front of the church on June 3. The installation was just in time for the parish to celebrate the saint’s June 5 feast day, said Rita Kramer, the parish’s secretary.

Parishioners were in awe when they saw the statue, she added.

"They absolutely couldn’t get over it," noted Kramer, who also has been a lifelong parishioner. "I just thought it was great bringing it back home."

According to a Nov. 15, 1957, Catholic Courier Journal article, a fire destroyed St. Boniface Church on Nov. 6, 1957, as renovation work was about to start as part of the parish’s upcoming centennial celebration. The parish was founded in 1860 and dedicated in 1861 to serve the area’s German immigrant community. The Gothic Revival-style building was constructed in the late 1880s, according to the article, and the current church building on Gregory Street was constructed in 1960.

Kramer was a high-school student in 1957, and she had just arrived home when she saw fire trucks racing to her church. She remembers seeing no flames or smoke coming from the structure.

"Two hours later, the fire went through the roof of the church," Kramer said. "You could see flames, smoke, everything. It was unbelievable."

The fire had begun in an attic crawl space and spread very quickly because of that day’s winds, added parishioner John Curran, who also had been a student at the time of the fire. On that day, Cardinal Francis Spellman, then-archbishop of New York, had been flying to Rochester from New York City to celebrate then-Bishop James E. Kearney’s 25th anniversary Mass and reportedly saw the flames from his plane, according to a Nov. 8, 1957, Catholic Courier Journal article. 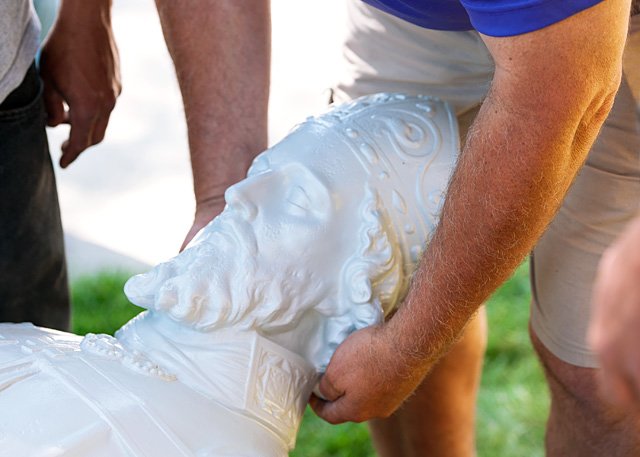 Mark Ogden, owner of AAA Masonry, holds the St. Boniface statue as he helps lift it onto its new base at St. Boniface Church in Rochester June 3.

As firemen worked to put out the blaze, many people began the arduous task of rescuing and removing the sacred items inside, particularly the Blessed Sacrament, Kramer and Curran said. At the time, the statue of St. Boniface stood in an alcove above the church entrance, Kramer recalled.

Months later, she watched the statue’s removal from the alcove, as the church was to be dismantled and razed, she said. Curran said he remembers the statue laying on the ground in the spring of 1958 when it reportedly went into storage.

From that point, the whereabouts of the statue became a mystery, Kramer said.

Then, two years ago, Jim Jerris contacted the church after he had lunch with friends in the Southwedge neighborhood near St. Boniface.

Jerris, owner of The Trading Post antique shop in Avon, spoke with Kramer and told her that he had a statue he thought belonged to the church, she said.

Jerris had found the statue three years ago in the backyard garden of a home in Penfield, he said. The owners had died, and their children had called Jerris to liquidate the estate, he said. After discovering the statue and knowing it had to be valuable, he discovered an old Democrat and Chronicle article in the house about how the owners had received it as a gift from a neighbor. The statue had been purchased through a WXXI auction fundraiser, he said.

He decided to bring the 7-foot statue to his shop, a process that led to it falling on his leg, he said. Jerris added that his leg did not suffer any permanent damage but he sustained a hematoma that lasted about six months. He could hardly walk but he kept on working, he said.

"He healed my leg," Jerris said of the saint.

The statue stood guard in front of Jerris’ shop on Route 15 for about two years, and during that time, buyers from Canada and Atlanta offered up to $7,000 to purchase it, he said.

But, he noted, he instinctively knew St. Boniface had to go back home. After reaching Kramer, Jerris said he decided to donate the statue back to the church.

"If I didn’t buy that estate … nobody would have moved that," Jerris said of the statue. "It’s back home."