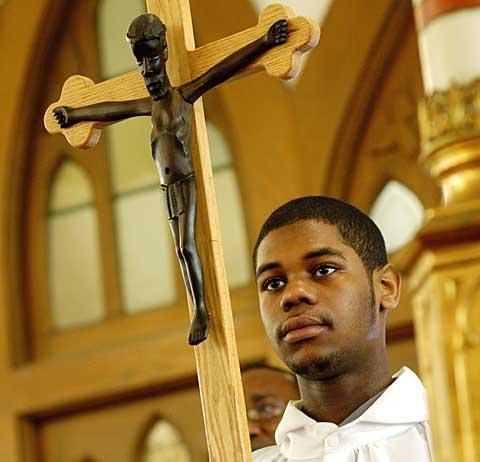 Christopher Spinks leads the procession to the altar during a Jan. 2006 Mass at the former St. Bridget's Church.

Rochester’s St. Bridget and Immaculate Conception parishes will worship together at 10 a.m. Sundays as of July 4, Father Paul Gitau, parochial administrator, announced in a May 3 letter to parishioners.

In February St. Bridget’s parish community relocated to Immaculate Conception Church, and the parishes had been worshipping there at separate Masses since Feb. 21. The parishes decided to re-evaluate the worship arrangement in three months, Father Gitau said, and on May 1 the pastoral councils of both parishes unanimously agreed to drop the 9 a.m. Immaculate Conception Mass and the noon St. Bridget Mass, which drew about 20 parishioners.

"At the (9 a.m.) Immaculate Conception Mass we get 100 plus (people) and the church is very big, so it is not viable to have two Masses," Father Gitau said.

St. Bridget’s parish community moved to Immaculate Conception after being unable to handle increasing deficits and declining attendance. The final Mass at St. Bridget Church, 14 Mark St., was celebrated Feb. 14 and at the time, Father Gitau said the St. Bridget property would be put up for sale after diocesan officials assessed its value.

Cheryl McKeiver said the small but faithful group of parishioners who journeyed from St. Bridget to Immaculate Conception is notable for their spirited celebrations of Mass.

"We don’t mind saying ‘amen’ and celebrating and really singing out and using gospel music and tambourines," McKeiver said.

"Right now everyone (from St. Bridget) is just a little bit battered and bruised," she remarked. "Our next step is to see how we can acclimate to the new environment."

McKeiver said she hopes that the name St. Bridget will be retained in the St. Bridget Martin Luther King Scholarship fund, which gives out scholarships to young parishioners. She said she also hopes St. Bridget parishioners will be able to maintain a ministry called Charlie’s Angels, which was named for the late Deacon Charles Dispenza, the parish deacon for St. Bridget and Immaculate Conception.

Outreach will remain important for St. Bridget parishioners, no matter where they are, she said.

"We do love who we are, and we are trying to extend that love outside our four walls," McKeiver said.