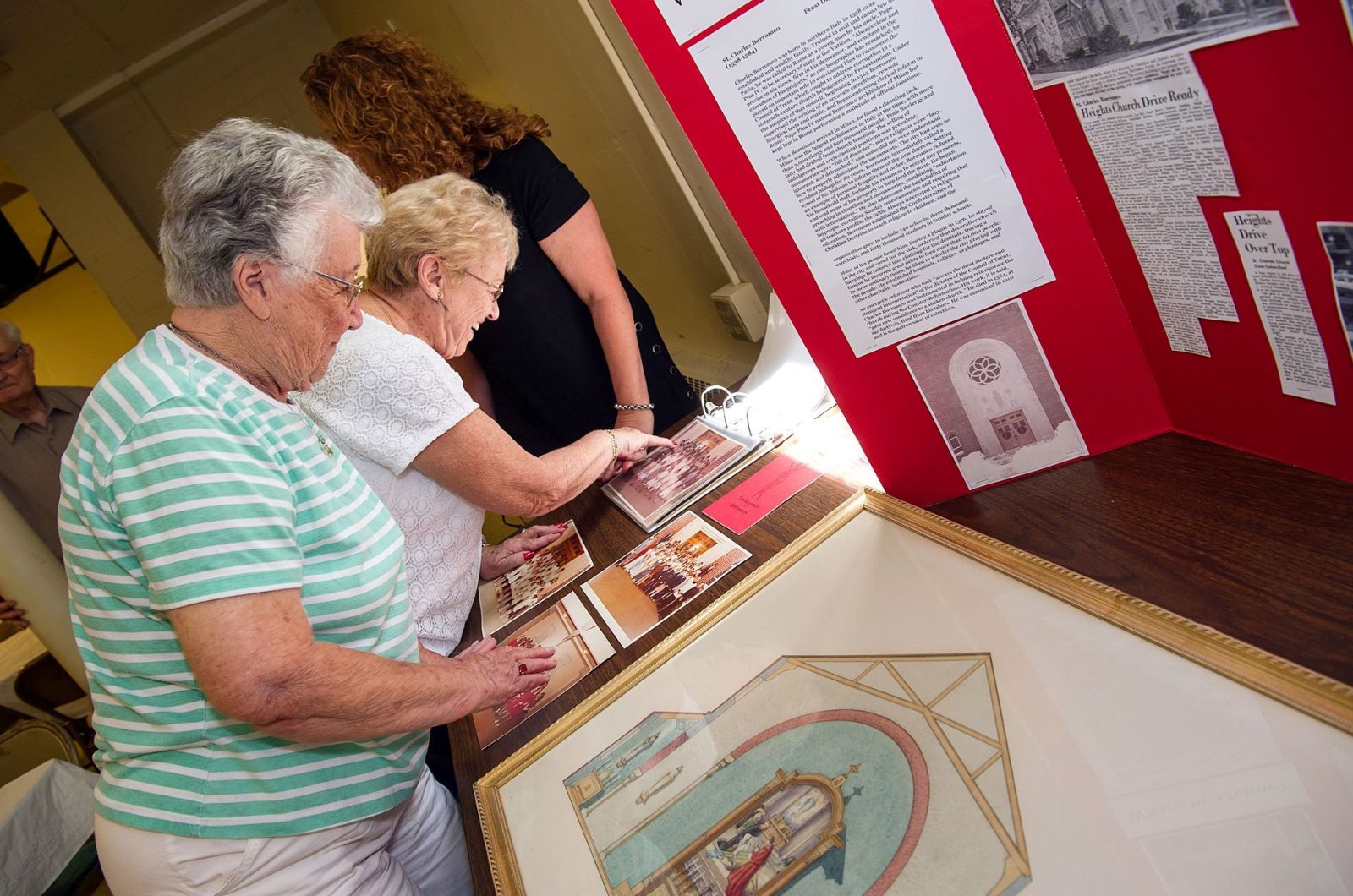 Florence Pavlina (front) and Marilyn Zazzara look at a display of memorabilia June 25 at St. Charles Borromeo Church in Elmira.

“It was very bittersweet,” said Karen Jennings, who helped organize a reception that followed the special early-afternoon liturgy.

St. Charles Borromeo — which has served Catholics in Elmira Heights since 1897 — will no longer be the site of Sunday Masses as a result of scheduling changes brought on by the clustering of Elmira’s three Catholic parishes.

The cluster became official in late June, with the number of Sunday Masses among the city’s six Catholic churches reduced from 10 liturgies to seven, as the cluster grapples with declines in attendance and priest availability. According to diocesan officials, it is on track to become a single citywide parish in about a year.

St. Charles Borromeo’s final Sunday Mass was celebrated by Father Scott Kubinski, pastor of the new cluster, who since 2010 also has served as pastor of Christ the Redeemer Parish, which comprises St. Charles Borromeo along with Elmira’s St. Casimir and Our Lady of Lourdes churches. Father Kubinski will now oversee Blessed Sacrament Parish (Ss. Peter and Paul and St. Patrick churches) and St. Mary Southside Parish as well.

Jennings said the post-Mass reception “was wonderful — we had more people than we expected.” A particular point of interest, she said, were three long tables of memorabilia featuring such items as historical newspaper articles about the church, a wide variety of photographs and old parish directories. A longtime St. Charles Borromeo parishioner, 92-year-old George Morich — who in 1960 attended the first Mass in the parish’s current building — made a point of being the last person to exit from church after the June25 liturgy, Jennings noted.

“It was really a great celebration. It was a beautiful day; the sun was shining,” said Sue Hartman, who also served as an event organizer.

For the time being, St. Charles Borromeo’s property, which is up for sale, will remain open for monthly First Friday and First Saturday Masses as well as funerals, weddings and other special events. Still, the loss of Sunday Masses marks the end of an era for people such as Hartman, who has belonged to St. Charles Borromeo since 1947 and was confirmed and married there. Many of her family members have received sacraments at the church as well.

“It’s been a constant in my life — a lot of good memories,” Hartman said, adding that she hopes a suitable buyer can be found for her beloved structure. “It’s a beautiful church. We’ve got such beautiful windows, and you kind of wonder what’s going to happen to all that,” she said.

Hartman lamented the difficult economic climate in the Chemung County region, which has made it difficult for younger people to establish local roots and maintain membership at area Catholic parishes. A March 19, 2017, article in the Elmira parishes’ combined bulletin noted that between 2012 and 2016, the average total weekend Mass attendance in Elmira’s six churches dropped from 2,404 to 2,019 — a decrease of 16 percent.

On the other hand, she noted that St. Charles Borromeo members are adept at change, having dealt with parish reconfigurations in the past. Meanwhile, Jennings, who has worshiped for many years at Our Lady of Lourdes, said she has gotten to know the St. Charles Borromeo community better since Christ the Redeemer Parish was formed in 2009, making many friends while serving on the liturgy and social-ministry committees.

“People are having a hard time, but we’re going to get through this,” she said.