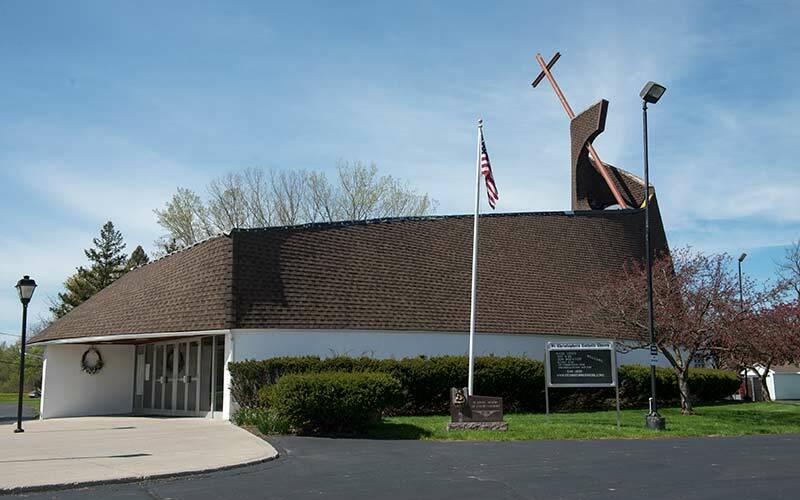 NORTH CHILI — St. Christopher Parish has launched a concerted effort to address viability concerns in an effort to stabilize its short- and long-term future.

In October 2022, Father Eloo Nwosu, St. Christopher’s first-year parochial administrator, and Christopher Frontale, first-year finance director, notified the diocesan finance office that the church’s heating system needed to be replaced and other less urgent capital repairs were required as well, but the parish could not afford the work to be done.

After discussions involving diocesan and parish leaders as well as parishioners, the parish received a letter dated Nov. 9, 2022, from Bishop Salvatore R. Matano. In the letter, the bishop cited St. Christopher’s troubling attendance and financial trends, noting that the parish was projected to become insolvent by the spring of 2023.

In response, St. Christopher has conducted open meetings and also organized a task force — at Bishop Matano’s recommendation — in an effort to stabilize the parish.

“It’s time to take a deeper look at what’s been going on. We can do better,” said Shauna Cross, who serves as the task force’s project manager.

In his Nov. 9 letter, Bishop Matano stated, “I now write to you today out of deep pastoral concern for the current situation at Saint Christopher Parish, namely the declining attendance at Mass and participation in the Church’s sacramental life, as well as the financial resources available to sustain a vibrant faith, alive and strong in the North Chili area.”

“I appreciate that these areas of concern have been further exacerbated by the pandemic, but this has only amplified a decline that has been in process for several years,” Bishop Matano’s letter added.

“I do appreciate that for some parishioners this situation at St. Christopher’s may come as a surprise. However, repairs only recently surfaced which have exacerbated the parish’s weak financial condition. Nonetheless, the sad decline in Mass attendance has been a visible sign in an accompanying decline in parish support,” the bishop’s letter stated.

In light of Bishop Matano’s concerns, town hall-type meetings took place at St. Christopher Nov. 6 and 20 from which a 13-member task force was formed. That group has identified five focus areas to rebuild the faith community: financial planning and recovery; spiritual healing/Eucharistic Revival; community building and evangelization; fundraising; and communication planning and implementation.

In the area of finances, Cross said that “we now have a reasonable plan as a guide and we will monitor it closely going forward” in terms of defining an achievable budget through increased contribution levels and fundraising initiatives. For instance, the parish will launch a brick-buying campaign in January 2023 that, she said, serves as an apt metaphor for the parish’s revival: “Alone, it’s one brick. Together, it’s a paved road.”

Cross added that the parish seeks to build community by increasing social and spiritual initiatives for people of all ages. A big priority, she said, is to bring more parishioners back to church in ways that weren’t possible at the height of COVID.

“Sacraments are delivered in the church; this is where we grow together,” she explained. “You can’t really do this in isolation. I think, for a lot of people after COVID, they became complacent, and it’s time to snap out of complacency and become this vibrant community again.”

Cross, who is heading up communications for the task force, noted that all parishioners have been encouraged to become involved and offer suggestions. She added that weekly progress updates are being given by the planning team at Sunday Masses, and a survey was to be conducted in late December to better understand parishioners’ needs and wants.

In his Nov. 9 letter, the bishop asked for Father Nwosu to submit the task force’s recommendations to him by Jan. 15, 2023. However, Cross said that the parish requested and was granted an extension through March because it felt the Jan. 15 deadline was too soon to begin implementing concrete plans that would hold up over the long haul.

“We’re looking at longevity, not just stopping the bleeding,” explained Cross, whose grandparents, Millie and Tony Uttaro, were founding members of St. Christopher Parish in 1968.

She pointed out that many other parishes are going through similar challenges as St. Christopher: “We are not alone in this.”

Meanwhile, Bishop Matano, in his Nov. 9 letter, noted, “As we face the challenges ahead of us, I know you share my sadness that even during this three-year Eucharistic Revival in our Diocese and throughout the United States, so many of our sisters and brothers do not practice the faith or worship God at Mass each week, severely hindering parish life.”

Cross said her parish is working hard to turn sadness into hope, stating that the bishop’s letter has served to galvanize parishioners into action.

“It’s been a great opportunity to take a look at what’s going on. We are bursting with ideas and energy,” she said, noting that collections have already begun increasing and many parishioners have volunteered for committees. “The parish is very committed to working together.”

Tags: Monroe County West
Copyright © 2023 Rochester Catholic Press Association, Inc. All rights reserved. Linking is encouraged, but republishing or redistributing, including by framing or similar means, without the publisher's prior written permission is prohibited.