St. Ephrem on Mary, 'a cause for wonder' - Catholic Courier 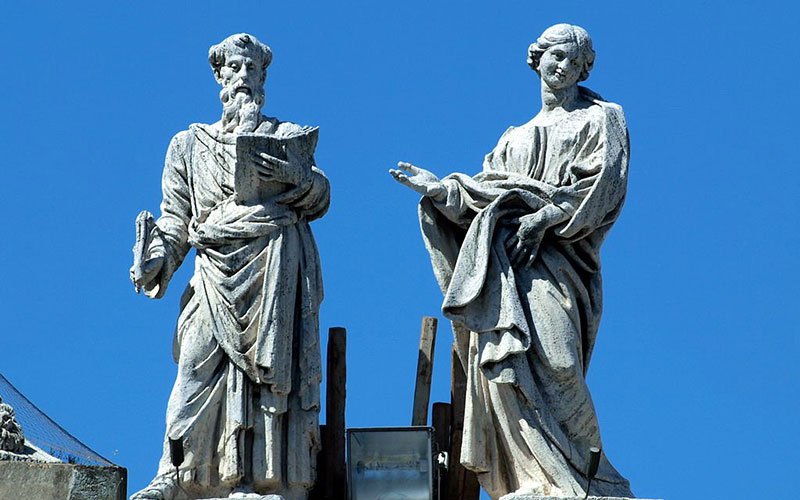 Sts. Ephrem (alternative spelling is Ephraim) and Theodosia are seen on the colonnade of St. Peter's Square at the Vatican May 2, 2012. Ephrem, a deacon, lived in the fourth century in an area of the world that is now south-eastern Turkey. (CNS photo by AlfvanBeem via Wikimedia Commons)

When I reflect on Mary, mother of God, often my admiration and gratitude for her life of fidelity, faith and wisdom cannot be expressed in ordinary words.

Instead, I turn to the deep tradition of poetry and music that has risen from among the faithful over the centuries, and especially to the work of one saint at the intersection of East and West: St. Ephrem the Syrian.

Ephrem (an alternate spelling is Ephraim) lived in the fourth century in an area of the world that is now south-eastern Turkey. He wrote and spoke Syriac, a dialect of Aramaic, a near linguistic cousin to the language spoken by Jesus.

Although he may or may not have been a monk, Ephrem was dedicated to a simple, ascetic lifestyle and served as deacon to several bishops.

At a papal audience in November 2007, retired Pope Benedict XVI told those gathered that Ephrem was Christianity’s “most important Syriac-speaking representative” who “uniquely succeeded in reconciling the vocations of theologian and poet.”

Ephrem’s contemporaries called him, “The Harp of the Spirit.” He wrote two types of poetry: hymns (“madrashé”), intended to be sung, and “verse” homilies (“memré”).

Unfortunately, Ephrem’s music has not survived, although others have created compositions to accompany his poetry, some of which has been translated and is accessible to us today.

Among the gems of Ephrem’s poetry are works devoted to the Incarnation and Mary, mother of God. With a blending rich in imagery, rhythmic cadence and striking paradox, the saint expresses awe and wonder at the mysteries nestled in the faith at times like the Annunciation and, most especially, the Nativity.

One such poem is “Homily on the Nativity,” translated by scholar Sebastian Brock in the book “The Harp of the Spirit: Poems of Saint Ephrem the Syrian.”

In it, Ephrem helps us see Mary as a young mother, cradling her baby as any young mother would, while giving a sense of the awesome nature of Mary’s baby, fully divine and fully human:

The King before whom the angels
of fire and spirit tremble
lies in the bosom of a girl,
and she cuddles Him as a baby.
The heaven is the throne for His glory,
yet he sits on Mary’s knee;
the earth too is his footstool,
yet like a baby he crawls beside her.

Ephrem’s theology flowed from two important sources: Scripture and nature. In both, he saw God’s love at work, and often brought them into his poetry.

In another vivid verse, which Pope Benedict XVI shared at his papal audience, Ephrem uses imagery and sound to beautiful effect to describe the Incarnation and, through it, the transformation within Mary at the Annunciation and Nativity:

Sometimes, Ephrem’s choice of what he writes about is as inspiring as the way he composes his verse.

For example, in his Hymn 12 on the Nativity, he writes in the immediacy of the first person, capturing a sense of Mary’s voice and joy in Jesus’ presence within her, much as in the Magnificat (Lk 1:46-55):

“The Babe that I carry carries me, saith Mary; and He has lowered His wings, and taken and placed me beneath His pinions and mounted into the air; and a promise has been given me that height and depth shall be my Son’s.”

Ephrem’s poetry is a treasure during Advent, when we turn anew to Mary in reflection and prayer. If our words seem to fall short, he draws us into the wonder, awe, faith and gratitude that is Mary’s heart — love at Advent and throughout all seasons too.

(Pratt is a columnist for Catholic News Service. Her website is maureenpratt.com.)