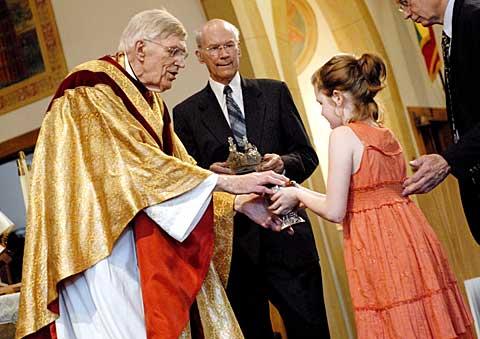 Many St. George parishioners spoke of fear and courage as they recounted the hardships that forced them to leave their native Lithuania.

Jonas Vaicys of Albion said his voyage to the United States began in 1949, five years after he fled Russian-occupied Lithuania for German refugee camps. He brought his pregnant wife and two children to Munich to board a plane to the United States with other expectant mothers, only to find that the plane had been taken. When they finally were able to get their group on a plane a month later, bad weather forced it to turn around mid-flight and land in Scotland. His wife and another woman went into labor on the flight and had to be left in Scotland, where his wife gave birth to their third child, a son.

Vaicys brought his other two children with him to America, where he found work on Long Island and other areas.After reuniting his family, they made their way to Rochester and St. George Lithuanian Roman Catholic Church.

For more than 100 years, the Rochester church has been the destination for many Lithuanians displaced from their homeland by politics and strife. Now the Lithuanian community has set out on another journey: It is leaving its Hudson Avenue home and moving to Our Lady of Lourdes Parish in Brighton.

The final Mass at St. George’s Church took place June 20 and featured portions in Lithuanian and English. The community’s next Mass will be at noon June 27 at Our Lady of Lourdes.

"What we are celebrating is church as a building, but you are the very glimpse of this building," noted the homily by Father Dominic Mockevicius, St. George’s pastor and a member of the first graduating class from the parish school, which opened in 1929 and closed in 1965.

Father Mockevicius celebrated the final Mass in the ornate gold and red vestments he wore for his first Mass as a priest, which he celebrated at St. George in 1948. Noting in his himily that the journey to a new home involves sacrifice, he pointed out that Jesus told his followers in Sunday’s Gospel that they had to take up their cross to follow him.

The liturgy ended with a procession of parishioners bringing flowers and candles to the parish’s icon of Mary, which is one of the items being transferred to Our Lady of Lourdes parish as a reminder of the Lithuanian parishioners’ former church.

Lithuanians first started arriving in Rochester in the late 1800s and early 1900s. The first Lithuanian-language Masses were celebrated in Holy Redeemer Church, and St. George Parish was incorporated in 1908.

The first church – a three-story facility incorporating church, school and a hall in the basement — was dedicated in 1910. The parish expanded its Hudson Avenue campus by building a rectory in 1925, and a second church in 1935. Since the second church was erected, the original building has been used as a school and parish hall; the hall was the site of a dinner following the June 20 Mass.

One of the classrooms at the school was converted into a Lithuanian cultural museum, containing hundreds of pictures from the parish’s history. The museum was open to those who attended the June 20 Mass, who picked out the faces of loved ones from photos ranging from school pictures to the community choir, scouts groups and folk dancing, sports, theater and literary clubs.

The museum also contains many photos of priests who served the parish, including the first pastor, Father Joseph Kasakaitis, who served from just after his ordination in 1910 until his death in 1930 at age 45. The second pastor, Father John Baksys, served from 1930 to 1965 and helped resettle hundreds of Lithuanians in the Rochester area during a wave of immigration during World War II.

Ilgunas said she met her future husband at the parish when she was performing with a folk dancing group. Memories like that are hard to leave behind, she said.

"It’s ours, and we spent so many years here, and the kids were baptized here," Ilgunas said.

Nevertheless, parishioners are working on forming new relationships. Jan Naujokas noted that the Lithuanian community was instrumental in pairing Rochester with the Lithuanian sister city of Alytus this year. She said the parish is also special for recognizing parishioner birthdays once a month by singing the Lithuanian birthday song, and she noted that church choirs have sung internationally.

Raymond Liutkus, the parish’s business manager and administrative assistant, said a Lithuanian-language school connected with the parish continues to teach the language to subsequent generations. Parishioners have worked hard to hold onto their roots, and the family-like atmosphere has been a constant within the parish, he said.

"The transition is very difficult," Liutkus said. "A lot of the older parishioners expected to be buried from this church."

Yet the work of the parishioners will not end when they reach their new destination, Father Dominic Mockevicius said. Volunteers are need to help Catholics in Lithuania to rebuild their faith after a half-century of persecution under communism.

"We resolve to continue the mission of our founders and are united with all the members of the Roman Catholic Church as we face the challenges of our times," he wrote in a bulletin column.