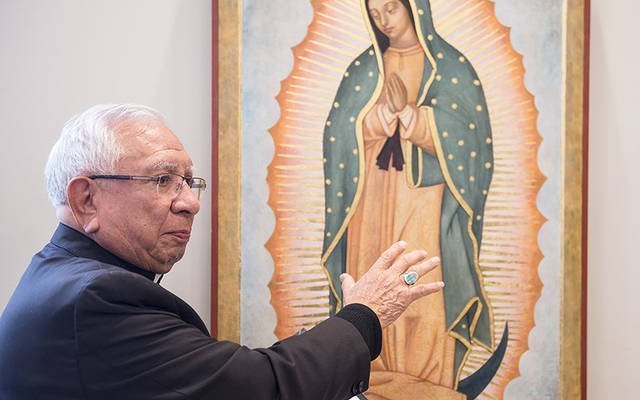 Bishop Emeritus Ricardo Ramirez of Las Cruces, N.M., talks about the icon of Our Lady of Guadalupe that was dedicated during a ceremony at St. John Fisher College Dec. 10. (Courier photo by John Haeger)

PITTSFORD — Our Lady of Guadalupe is the perfect example of peace that is possible in this world, two Marian scholars noted during the dedication last month of a new icon in her honor at St. John Fisher College.

Mary was Jewish by race and culture, is the first and most important follower of Jesus, and her name is of Arabic origin, explained Timothy Matovina, codirector of the Institute for Latino Studies and professor of theology at the University of Notre Dame.

“It is possible for people to be at peace with one another,” Matovina noted. “She can be an instrument of peace.”

Matovina and Bishop Emeritus Ricardo Ram√≠rez of Las Cruces, N.M., led a Dec. 10 discussion at St. John Fisher on “Power, Piety and Periphery: Guadalupe and Juan Diego in the New World.” The discussion followed a Mass that was held at Hermance Family Chapel of St. Basil the Great, and a large image of Our Lady of Guadalupe was unveiled in a ceremony after the liturgy.

The image was painted by iconographer Minhhang K. Huynh, who left her native Vietnam in 1985 and later graduated from SUNY Geneseo, according to information from St. John Fisher officials. She currently lives near the Abbey of the Genesee in Piffard.

Last year, the college’s Latino Student Union proposed the idea of having a Guadalupe image in the chapel, said Basilian Father Kevin Mannara, director of campus ministry. At that time, Father Leo Hetzler, who served the college from 1959-94, was gravely ill and the idea formed for the Basilian community to commission a painting in his honor. Father Mannara contacted Huynh because of her previous works of sacred art.

“God brought me to (the college) to do this,” Huynh said of the project following the Dec. 10 dedication. “God is in control always.”

The project also was significant because the idea for the icon came from the students, Father Mannara said.

And since the college was initially created to serve first-generation students, and many such current students are Hispanic, “what could be more welcoming to Hispanic students than the image of Our Lady of Guadalupe?” he added.

Rusmaldy Reyes, a junior and president of the Latino Student Union, said seeing the project come to fruition has been a blessing. While the Latino student population on campus is small, the project provided an opportunity to show appreciation and respect for those students, she said.

“We wanted a piece that everyone could come and see and give gratitude ‚Ä¶ (and) be part of Fisher’s culture on campus,” added junior Kenneth Caminero, also a Latino Student Union member.

Our Lady of Guadalupe has become a powerful symbol around the world, Bishop Ram√≠rez said during his talk. Her Dec. 12 feast day is a grand celebration in Mexico and throughout the world, he noted, and many cathedrals are named for her.

He said he is one of the mestizos of Mexico — those of European and native tribal heritage — to whom she appeared to offer her blessing on the new mixed race in the Americas, which resulted from Spain’s conquest of the Aztecs. She appeared to St. Juan Diego about 40 years after the Spanish had arrived in Mexico and had raped indigenous women, he explained. Mestizo babies were not wanted by the Spanish or the native Aztecs and were often killed, Bishop Ram√≠rez said.

“It was a very difficult time ‚Ä¶ a bloody, violent clash,” he said of the Spanish conquest. “Our Lady appeared in the midst of all this violence.”

Not only did her face appear the same color as the mestizos, but she spoke to St. Juan Diego in his native language, Bishop Ram√≠rez said. She appeared to him in 1531 at the hill of Tepeyac near Mexico City and asked him to have a church built there.

Her message was that “it’s OK to be who you are,” he said. “You are part of a new race being born.”

She appeared to not only offer words of comfort, but also to listen and offer understanding, he said.

As the mother of Jesus, who saw her son crucified on a cross, “she knows the pain that we have,” said Bishop Ramirez. “We are not alone.”

When Juan Diego tried to argue that he is not worthy of her attention, she told him it was essential that he carry her message because he represents all who are ignored, oppressed and suffering injustice, he added. Our Lady of Guadalupe also appeared as a pregnant woman because Jesus is about to be born in the hearts of all who believe, he said.

“She is there at the dawn of Christ’s coming in America,” said Bishop Ramirez.