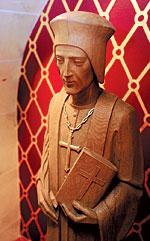 The convergence this year of the Year for Priests and the anniversaries of the martyrdom and later canonization of St. John Fisher (c. 1469-1535) may be a coincidence, but their intersection has significance for the Diocese of Rochester.

As a chancellor of Cambridge University, he provided clergy with a rigorous liberal-arts education and transformed the small university into one of renown.

"He invited (famed Dutch humanist Desiderius) Erasmus over to teach at Cambridge Greek and Hebrew, so (students) could better understand the Bible, and so they could be better preachers," said Father William E. Graf, chair of the religious-studies department at St. John Fisher College and the college’s William and Helen Cavanaugh Chair of Catholic studies.

St. John Fisher’s focus on better educating clergy illustrates his response to criticism of the clergy by leaders of the Protestant Reformation, Father Graf said. The saint’s goal was to foster better preaching and moral consistency among the ordained. He also called for priests to receive a stipend so that rich patrons would not be able to exert influence on homilies.

In the Year for Priests, St. John Fisher serves as a model of a priest, bishop, cardinal and saint who was faithful to the indissolubility of marriage and the Catholic Church even though it meant his martyrdom 475 years ago at the direction of King Henry VIII, according to Father Graf. This year, John Fisher will have been a saint for 75 years.

The saint had a long history with Henry VIII’s family, dating back to the years when the future king’s grandmother, Lady Margaret Beaumont, relied on John Fisher as a personal confessor and spiritual director, Father Graf said. In gratitude, Beaumont gave large sums of money to improve the academic program at Cambridge University.

This patronage may be one reason why Henry VIII had it in for the bishop of the small Diocese of Rochester, England, even though St. John Fisher was well-known for his charity to the poor and his pastoral approach to those who disagreed with him, Father Graf said.

"He would invite everybody to his table, even his enemies and those who disagreed with him theologically, and he would listen to them," the priest said.

Father Graf described St. John Fisher as a bishop with a thin, sickly stature, who was uninterested in climbing the ecclesiastical ladder. Despite this lack of aspiration, St. John Fisher was made a cardinal in 1535 by Pope Paul III as a way to protect him from Henry VIII’s wrath over being denied an annulment of his marriage to Queen Catherine of Aragon. The king sought the annulment so that he could marry Anne Boleyn in hopes of bearing a male heir.

Upon hearing that St. John Fisher had been made a cardinal, the king reportedly wisecracked that he would send the cardinal’s head to Rome to receive the red hat. It is believed that the king was behind plots of an attempted poisoning of and warning gunshots aimed at St. John Fisher, and the king also tried to deter the future saint with imprisonment.

Ultimately, St. John Fisher was beheaded June 22, 1535, on charges of treason for refusing to make an oath of supremacy to King Henry VIII as head of the church in England. The saint’s head was boiled and put on a lance hanging from a London wall, while his body was dumped into an unmarked grave. The saint would later be exhumed for burial in the Chapel Royal of St. Peter in Chains, the parish church of the Tower of London. Also buried in the chapel is his friend, St. Thomas More, who was beheaded just weeks after St. John Fisher, also for refusing to agree to royal control of the church in England.

Father Graf noted in a 2008 speech that Bishop James E. Kearney named St. John Fisher College and had been present in Rome in 1935 for the canonization of St. John Fisher and St. Thomas More.

The college’s Cardinal sports teams and its newspaper, the Cardinal Courier, pay tribute to the saint, Father Graf said in the 2008 speech. The saint also signed his correspondence as Joannis Roffensis, or John of Rochester, which is referenced in the name of the college yearbook, Jo Roffs.

Father Clifford said that St. John Fisher can serve as an example for contemporary parishioners.

"He can certainly be admired both for what he challenges us towards, learning and exploration of thought, as well as living the Gospel," Father Clifford said.