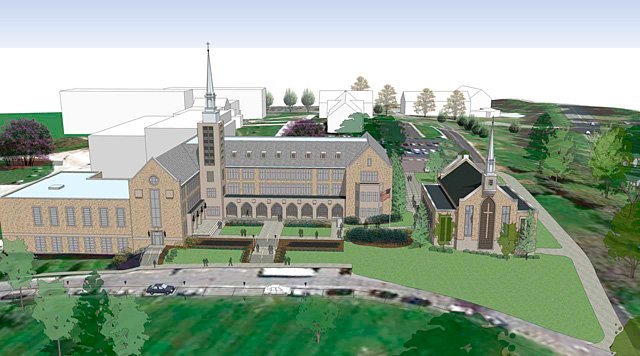 Above is an artist’s rendering of the new Hermance Family Chapel that is being built at St. John Fisher College in Pittsford.

PITTSFORD — St. John Fisher College broke ground on a new chapel during a ceremony held July 16 in a tent adjacent to Kearney Hall, looking down on East Avenue.

The construction of the 9,000-square-foot chapel will be completely funded by donations from more than 100 benefactors, with the principal gift coming from the Hermance Family Foundation in honor of Ronald E. Hermance Jr. A 1969 graduate of St. John Fisher, Hermance was a member of the school’s board of trustees from 2009 until his death in 2014. Hermance, who was president and CEO of Hudson City Bancorp, had remained actively involved with his alma mater and in 2007 had received the school’s Excellence in Management Award. Before he passed away Hermance had spoken with various members of the St. John Fisher community about his desire to help fund the construction of a new chapel on campus, and his family helped fulfill his wishes after his death, according to the college’s president, Gerard J. Rooney.

"How fitting it is that Ron Hermance, who today would have celebrated his 69th birthday, would want to honor his faith, his family and the Catholic heritage of his alma mater by providing the campus community with a new center for spiritual life," Rooney said during the groundbreaking ceremony.

While the chapel will serve as a lasting tribute to Hermance, it also will honor the commitment of the Basilian Fathers who founded St. John Fisher College nearly 70 years ago, Rooney added.

"The beautiful Hermance Family Chapel of St. Basil the Great will also realize the vision of the Basilian Fathers for the college’s footprint, which always included a chapel at the main axis of the campus," he said.

The new chapel will be built of the same "Fisher brick" as Kearney Hall and, like the neighboring building, will feature Gothic architecture and a steeple.

"The steeples on Kearney Hall and the chapel will remind everyone to lift their eyes up to our God in heaven," Basilian Father Al Cylwicki noted during the groundbreaking ceremony. "St. John Fisher College has often been called the college on the hill, and now with the new chapel, the college will be even more visible on the hill from those streets down below."

It also will include 12 large stained-glass windows, and the sanctuary will have an altar, ambo, tabernacle and a choir area complete with a grand piano. The chapel’s nave will be able to accommodate 250 people, and the chapel also will include a narthex, sacristy, vestry and reconciliation room. Students need such a place on campus just as much as they need classrooms because academics are only one part of the St. John Fisher experience, Father Cylwicki said.

"Since St. John Fisher College also considers the souls of its students, the celebration of some sacraments and the presence of Christ in the Blessed Sacrament will be key components of this chapel," said Father Cylwicki, who has served the campus community for 20 years as a math professor, volunteer coach and member of the board of trustees.

Daily and weekend Masses currently are held in the Harold J. Coleman Chapel, which is located across East Avenue in Murphy Hall. These Masses will move to the Hermance Family Chapel once it is completed, and college officials have not yet decided how the Coleman Chapel will be used at that point, Rooney said. The Coleman Chapel has hosted several weddings and even funerals over the last 20 years, and alumni and students will be welcome to celebrate such events at the new chapel as well, he said.

"We pray that this will be a new space for us to offer hospitality, a place where we will persist in certain hope, where we will rejoice, where we can mourn and where we will work together to perfect our kindness, charity and love for those around us, so that in our small measure we can work to live in peace with each other and the world," Rooney said.

The world is crying out for such a place of blessing in the midst of the terror and violence happening today, Bishop Salvatore R. Matano said as he blessed the site of the new chapel.

"We offer this prayer asking that this chapel will usher from it students who will be the vehicles, the architects and the instruments for constructing a world at peace, that this chapel will give them the tranquility and consolation needed for them to develop the gifts that you have given to them," he said.