St. John Paul II's visit marked 'a before and an after' for Cuban church - Catholic Courier 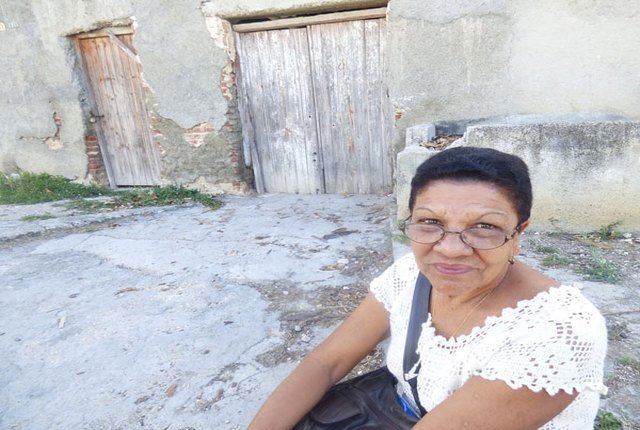 Clementina Torres sits outside her former Catholic parish in Cueto, Cuba. A fixed-up building next door has become the new parish, but the old one is a reminder of a past that was not friendly to Catholics on the island.

HAVANA (CNS) — Sitting outside the church where she was baptized, 65-year-old Clementina Torres recalls the time when anyone who publicly admitted being a Catholic in Cuba faced a host of problems. It could mean not getting into the "right" university or program, being taunted by classmates or isolated by neighbors, or it resulted in being fired, demoted, or not allowed to advance professionally.

"We were never (physically) punished, but people would point at us, ‘They’re religious,’" and not in a good way, she recalled near her old parish, Our Lady of El Carmen in Cueto, on the eastern end of the island.

In 1959, after Castro’s revolution, religious liberties for any person of faith came to a halt. But because Catholics made up the bulk of religious believers on the island and ran the major institutions, such as schools, universities, hospitals and orphanages, the church — its members and institutions — arguably suffered and lost the most.

Along with other buildings used for religious gatherings, Torres’ church was seized by the government, closed and put to nonreligious uses. Some Catholics like Torres began to quietly practice; others were defiant, while others stopped practicing altogether.

But those times have changed, Torres said recently, accompanied by her two grandsons as they headed home after Sunday Mass. And there’s optimism for the future of the church on the island, particularly following December’s news announcing renewed relations between the U.S. and Cuba — developments that advanced with diplomatic help from the Vatican.

Many waited to see results of the U.S.-backed Summit of the Americas in Panama April 10-11; Cuba was to participate for the first time. The questions were many: Will the U.S. remove Cuba from the government’s list of State Sponsors of Terrorism, allowing for establishment of embassies in Havana and Washington? When will they reopen? What will restored diplomatic relations mean for the church and its members?

If Torres’ new parish — though not a new building — is any indication, it shows a certain optimism: new brick and mortar, cement and paint, being put to use to fix up long-neglected church properties. Her old parish, which is next door to the new one, stands battered and padlocked — a not-so-quiet reminder of what Catholics endured from the time the communist government curtailed organized religion in the 1960s until 1998, when St. John Paul II paid a visit that greatly loosened religious limitations in Cuba.

Back then, people who were not believers and had never been in a church or witnessed a religious service in the officially atheist nation went to see the pope, recalled Lourdes Maria Escalona, who works in a Catholic formation center in eastern Cuba.

"They ran out the door to see him," Escalona said.

It paved the way for a religious awakening now paying off in Cuba’s younger generation of Catholics eager to express, practice and spread the faith.

"It marked a before and an after," said Escalona.

But it’s hard to gauge by the numbers where the reality for Catholics on the island stands. According to the Vatican, 53 percent of the island’s 12.7 million or so inhabitants are said to be Catholic. Yet some estimate that anywhere from 10 percent to 1.3 percent of those practice the faith, and few more attend Mass.

Physical reconstruction of church buildings, however, is taking place wherever money can be secured to do so.

At the Cathedral of Our Lady of the Assumption in Santiago de Cuba, the island’s second-largest city, large-scale restorations are underway to the tune of about $544,000. Some of that money has come from abroad to fix damage from Hurricane Sandy, but some of the damage also resulted from years of neglect, when relations between church and state were less favorable and restoration was prohibited.

Other structures — including chapels and mission houses, where Catholic communities gather to sometimes receive the sacraments — are sprouting, but with restrictions. Some have little more than an aluminum roof over them in the middle of the countryside and are not allowed to have walls.

"A lot of them make something out of nothing," said Father Estefan Turcios Carpano, national director of the Pontifical Mission Societies in El Salvador, who visited mission houses and other small communities in Cuba in March.

Some church-run venues host educational programs for believers and nonbelievers, such as English, computer literacy, and even small-business administration classes, with the government’s full knowledge.

Catholicism on the island may be battered but it’s not dead, said Father Turcios. What’s striking is seeing a church with many members of an older generation — practicing Catholics before the revolution — or very young ones, likely the fruit of the changing environment following the 1998 papal visit, Turcios said.

One of those is 12-year-old Yanela Varela, who became a Catholic four years ago because she lived in a neighborhood that had its share of Catholic children.

She said she would see children her age head off for catechism classes in a nearby house. One day she came upon a prayer card of Our Lady of Charity of El Cobre and asked them about it.

"I just had a curiosity," she said.

So she started going to catechism classes with them. After becoming Catholic, she told her mother Zenaida, who had grown up without religious belief, about what she had learned in class. Her mother also began attending classes about the faith and ultimately became a Catholic, too.

While there’s hope, there are challenges facing the renewal of the Catholic faith in Cuba. The atheism ingrained in the post-revolution generation of Cubans, the growing number of Protestants on the island — estimated at 11 percent, and the widespread practice of Santeria, which mixes beliefs of African deities with Catholic saints, present a combination of factors not found elsewhere.

But Escalona, who was Catholic in Cuba when "being a Catholic was something quite complex," said what happened Dec. 17, when the door slightly opened toward a new relationship with the U.S., infused hope. And it helped to know that Pope Francis and the Vatican had a hand in it.

"I believe that God looks at Cuba with eyes of mercy," she said.