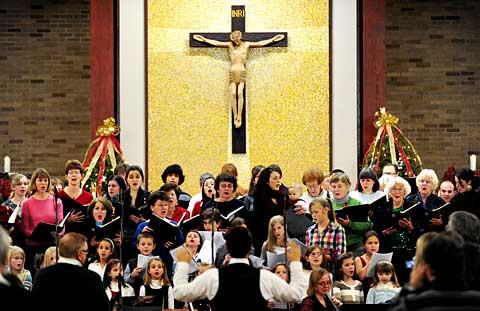 Choir members take part in a musical celebration of the 12th night of Christmas at St. Joseph Church in Penfield Jan. 8. The parish is celebrating its 150th anniversary this year.

So it may be appropriate that 150 years later, the parish has worked to get parishioners to focus on the three elements of its mission: gratitude, discipleship and hospitality.

Those three words are at the top of every parish bulletin and have been incorporated into the parish’s anniversary logo. They also help explain how the parish chose priorities for its yearlong anniversary celebration, which will feature a capital campaign and renovation project, 12 months of special events and a focus on expanding its ministries.

To be more hospitable, the parish has begun raising funds for the first phase of a $2.5 million facilities plan that will reconfigure the church entrance and its gathering spaces. To show gratitude for its 150-year history, the parish is establishing a long-term outreach to Bethany House, a Catholic worker home for homeless women and children. As part of the parish’s commitment to discipleship, it is developing small Christian communities to connect parishioners’ ministries and is installing a new full-immersion baptismal font to remind all parishioners of their baptismal commitment to Christ.

"We seek to witness the love of Jesus Christ in the world; that’s what all of our ministries come back to," said Father Jim Schwartz, pastor.

The parish also is planning for the diocese to return control of St. Joseph School to the parish — a change that will help ensure the school’s future, Father Schwartz said.

Among highlights of the yearlong celebration is a Mass at 11 a.m. June 6 with Bishop Matthew H. Clark. The liturgical celebration will be followed by a parish reception. Other highlights include a stewardship appreciation dinner April 25, a golf tournament Aug. 6, a parish and school picnic Sept. 19, and a parish retreat Oct. 9 and 10.

He said he hopes the anniversary celebration is both a time to remember and give thanks for the men and women of the parish’s past, and also a time for parishioners to consider how they can establish a legacy for the future.

The capital campaign is intended to tangibly build that legacy, Father Schwartz said. Elements of the proposed building project are:

Yet work will be dependent on fundraising progress, Father Schwartz noted.

"We are going to do it as we have the money available to do it, or we will not do it at all," he said.

The parish’s current 2,600 families and 400 children in its school are a far cry from its beginnings. In 1860, Redemptorist priests from Rochester and 12 families established a mission church to meet the needs of Penfield Catholics unable to travel to Rochester for Mass. Parishioner Margery Salmon of Penfield said St. Joseph Parish in Rochester was a large and growing parish at the time it established its mission church.

"They were generous enough to fund the one in Penfield," she said.

The original "church on the hill" was built on a Penfield Road site in 1872; prior to that parishioners met in an existing building on the site, Salmon said. St. Joseph was elevated from a mission church to a full parish in 1914 when the first pastor, Father William V. Gruenauer, was appointed. He served as pastor until his death in 1948.

In the 1950s, parishioners began to more acutely feel the lack of space at the original church, Salmon recalled.

"People would be outside the church, and they could not get in," she said.

In 1955, the parish began the first of a series of capital campaigns to replace the original church. A temporary church was built in 1957 and the school was built in 1960.

"Before we could complete all the building (projects), we outgrew that also, and we started having Mass simultaneously in school and the church," Salmon said.

The parish rectory, convent, school addition, and new permanent church were built in the 1960s and the temporary church was converted into a parish hall in that decade.

During the 1980s, when the church was led by Father James Moynihan, who was Bishop of the Syracuse Diocese from 1995 to 2009, the parish began a series of renovations, including installing a new organ, upgrading the sound system, installing a new baptismal font and carpeting in the church, and building a new multipurpose room and gym and a parish resource center. In recent years the parish had planned some more changes and launched a 2003 capital campaign to finance them, but the project was deferred.

Father Schwartz became pastor in June 2005 and subsequently has been working with parishioners to identify needs and develop a master plan for parish growth.

"St. Joseph’s is really the center of spiritual life of the entire community of Penfield," he said.

Salmon said the parish has distinguished itself over the years as having very active volunteers. It also tithes 10 percent of its collections to other organizations, she said.