St. Joseph’s Day can have its cake — and meat with it too - Catholic Courier 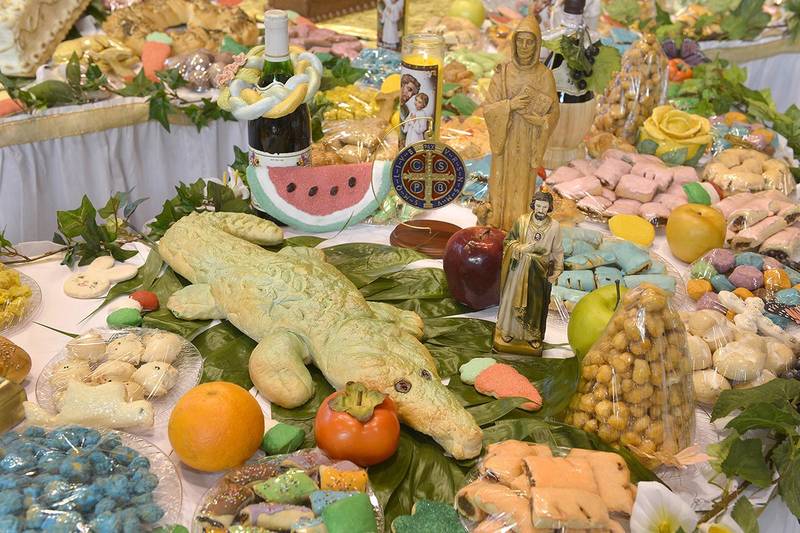 A St. Joseph altar is seen at St. Joseph Catholic Church in Gretna, La., in this undated photo. The tradition of the altar includes a table with three levels, symbolic of the Trinity, decorated with Easter lilies and covered with breads, oranges, lemons, artichokes, pastas and desserts. Breads are often baked in forms of crosses and pasta is served with bread crumbs, symbolic of wood dust for the carpenter, St. Joseph, whose feast day is March 19, 2021. (CNS photo by Frank J. Methe/Clarion Herald)

The two feasts days, just two days apart, fall in the middle of Lent this year. St. Joseph’s Day, on March 19, is on a Friday in Lent, a day Catholics are required to abstain from meat.

When St. Patrick’s Day falls on a Friday in Lent, as it does about every seven years, U.S. bishops often give dispensation for Catholics in their dioceses allowing them to eat meat on this day — often with the caveat that they should forgo meat another day.

And now with St. Joseph’s Day falling on a Friday, at least one archbishop has granted this similar dispensation, although technically it is not necessary since the feast is a solemnity, or a feast day of the highest rank, in the United States.

According to canon law: “Abstinence from meat, or from some other food as determined by the episcopal conference, is to be observed on all Fridays, unless a solemnity should fall on a Friday.”

The feast of St. Patrick is not a solemnity in the U.S., although it is in Ireland.

In a March 2 statement, Cardinal Joseph W. Tobin of Newark, New Jersey, said some Catholics in his archdiocese had asked him to grant them dispensation from not eating meat on St. Joseph’s Day, which he said he was “happy to grant” as part of the celebration of this solemnity during the Year of St. Joseph, announced by Pope Francis.

He also pointed out that each year “our Lenten austerity is interrupted by one or two solemnities, feast days of the highest rank that celebrate a mystery of faith such as the Trinity, an event in the life of Jesus, his mother, Mary, or another important saint.”

“A most fitting way to celebrate the solemnity,” the cardinal said of St. Joseph’s Day, “is a festive meal with your household and a gift to one of our food pantries or soup kitchens to ensure that the poor will eat as well.”

Aside from zeppoles, other foods that are often part of the traditional St. Joseph’s Day celebrations are dishes with figs or fava beans and pasta with sardines. The Italian dishes go back to the legend that Sicilians prayed to St. Joseph for rain to save them from starvation during a drought in the Middle Ages when they basically existed on fava beans.

Upon their survival, they honored the saint with a feast that they also shared with those in need. Today, many families and parishes, before the pandemic, have continued this tradition with St. Joseph altars — tables covered with food that is blessed and shared with all.

The tradition of the St Joseph altar includes a table with three levels, symbolic of the Trinity, decorated with Easter lilies and covered with breads, oranges, lemons, artichokes, pastas and desserts. It also always involves not just sharing food with each other but with those in need. Breads are often baked in forms of crosses and pasta is served with bread crumbs, symbolic of wood dust for the carpenter, St. Joseph.

In this pandemic year when celebrations and gatherings are muted, St. Joseph’s altars in the Archdiocese of New Orleans, where this is a big event, will still be set up at many parishes, and donations will be given to the needy, but there will not be the usual chance for parishioners to eat together. Some parishes are giving out candles or holy cards, others are offering takeout meals.

At St. Francis Xavier Parish in Metairie, Louisiana, the pastor will bless the St. Joseph altar March 19 after morning Mass and the altar will be open for viewing during the day. The parish also will be providing free pasta milanese lunches to go.

This year, like the year before, the St. Joseph’s Parade in New Orleans has been canceled due to the coronavirus pandemic.

On its Facebook page, the Italian American St. Joseph Society said the rollout of vaccines promised a slow return to “normal” and urged people to pencil in March 19, 2022, for the next St. Joseph’s Day Parade.

“In the meantime,” the post said: “Pray to St Joseph for the intercession of this devastating virus and that we may, once again, celebrate all things Italian while singing and dancing in the streets of the French Quarter. Join us in that celebration and devotion to St. Joseph in 2022!”