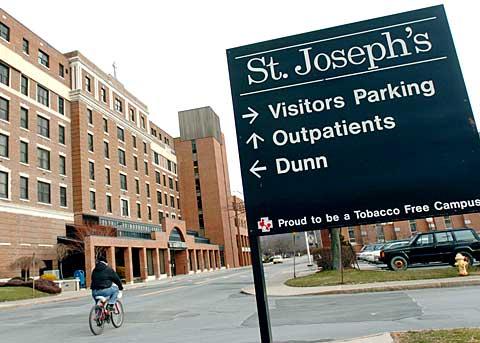 Officials from Elmira's St. Joseph's Hospital and Arnot Ogden Medical Center have announced that they have signed a letter of intent to form a long-term partnership.

Officials from St. Joseph’s Hospital and Arnot Ogden Medical Center, both in Elmira, announced Aug. 18 that they have signed a letter of intent to form a long-term partnership.

This clears the way for the two organizations to develop a legally binding definitive agreement that would be subject to final approval by the New York State Department of Health. Full implementation of the partnership would take two to three years and involve consolidation into a new company and a balanced, single board of directors. Each hospital would retain its individual identity, according to a statement released by St. Joseph’s.

St. Joseph’s officials had sought partnership proposals in recent months from both Arnot Ogden and Guthrie Healthcare System in Sayre, Pa. According to Donald W. Hartman, president/CEO of St. Joseph’s since March 2010, the hospital’s board of directors unanimously voted to accept Arnot Ogden’s proposal at its most recent meeting.

Hartman told the Catholic Courier that St. Joseph’s and Arnot Ogden plan to move quickly on finalizing their agreement in order to receive what he termed "significant funds available" from the state, provided the agreement becomes official by Sept. 30. He said this funding would significantly reduce both hospitals’ long-term debt, which for St. Joseph’s stands at approximately $15 million.

Hartman said partnering with Arnot Ogden would best serve the community in an era of continuing cost pressures, reduced reimbursement and rate adjustments, state and federal government regulations, and changing local demographics. Anthony Cooper, president/CEO of Arnot Ogden, added in a statement that his goal is "to stabilize and strengthen health-care services in the region, financial stability of both organizations, clinical quality, increased patient access and operating efficiency," noting that a larger, integrated local health-care system "will also enhance our ability to recruit and retain highly qualified and trained physicians."

The announcement marks the first time St. Joseph’s and Arnot Ogden have reached a tentative agreement following several failed attempts at partnering over the previous 25 years. Among those failed negotiations were 2007 talks mandated by the state’s Commission on Health Care Facilities in the 21st Century as part of a wide-ranging plan to consolidate health-care facilities and services around the state.

A major sticking point has involved the "Ethical and Religious Directives for Catholic Health Care Services," a set of 72 guidelines issued in 2001 by the U.S. Conference of Catholic Bishops. The directives address social responsibility; pastoral and spiritual responsibility; professional-patient relationships; care for the beginning of life and for the dying; and forming new partnerships with health-care organizations and providers.

In a 2007 Courier article, Cooper said Arnot Ogden already complied with 69 of the 72 directives, but acknowledged that his hospital does perform abortions and sterilizations, and offers contraceptives.

Under the new agreement, Hartman noted, St. Joseph’s would continue to operate under the U.S. bishops’ religious and ethical directives. While Arnot Ogden would not be subject to the directives, neither would Arnot Ogden be able to impose its ethical practices upon St. Joseph’s, Hartman said.

He observed that similar partnerships have occurred in recent years between Catholic and secular hospitals around New York state. Hartman said officials from St. Joseph’s, Arnot Ogden, the Diocese of Rochester and the Rochester Sisters of St. Joseph — the religious congregation that founded the hospital in 1908 — will meet over the next few weeks to clarify that the agreement can go forward based on proper interpretation of the Catholic directives.

"We have been in routine and regular communication with the Diocese of Rochester," Hartman said, adding that diocesan officials "have given every indication that we’ll be able to work this out."