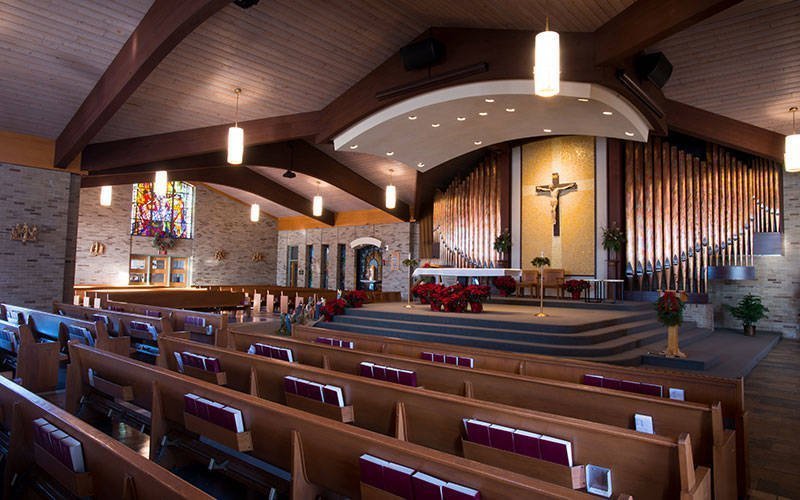 When it comes to titles of parishes and other organizations, St. Joseph endures as one of the most popular names in the Rochester Diocese.

The saint, whose feast day is March 19, is being honored in a year of consecration declared by Pope Francis to note the 150th anniversary of St. Joseph being declared patron of the universal church.

He has been a part of the downtown Rochester scene since 1836 when St. Joseph Parish was founded, making it one of the first parishes in the diocese. A new church was dedicated in 1846, and it remained a popular worship site for parishioners and city-based employees before being destroyed by a fire in 1974. The following year, St. Joseph Parish merged with nearby Our Lady of Victory, and today the parish is known as Our Lady of Victory/St. Joseph. A small park, featuring the shell of the original St. Joseph Church, exists at the building’s former site on Franklin Street.

Following the establishment of St. Joseph in Rochester, other parishes bearing the saint’s name were founded across the diocese later in the 19th century — including several churches that remain in existence today:

• St. Joseph Parish in Weedsport was begun in 1854 as a mission before becoming a parish in 1862. Its current church was built in 1957. Since 2005, St. Joseph has been part of Our Lady of the Snow Parish in Cayuga County along with St. John in Port Byron and St. Patrick in Cato.

• In 1864, St. Joseph Parish in Rush was founded; the cornerstone for the current church was laid in 1881 by Bishop Bernard McQuaid. Since 2012, St. Joseph — along with Guardian Angels Church in Henrietta — has been a part of St. Marianne Cope Parish in southern Monroe County.

However, the title of St. Joseph in the Rochester Diocese is not limited to parishes. Other entities bearing the saint’s name include:

• St. Joseph’s House of Hospitality, a Catholic Worker facility, located across the street from the neighborhood center at 402 South Ave. Begun in 1941, St. Joseph’s House provides food, clothing and shelter for the hungry and homeless.

• St. Joseph’s Hospital in Elmira, which has provided health care in the Southern Tier since 1908 when the Sisters of St. Joseph led its founding.