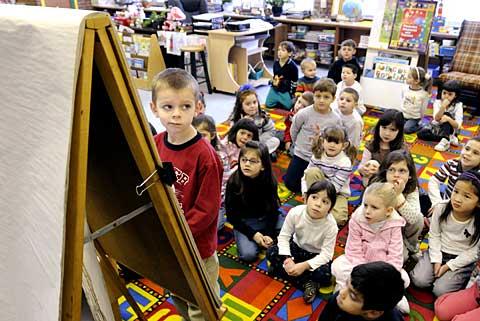 Students work on a lesson in Diane Albert's kindergarten classroom at Greece's St. Lawrence School in this file photo from January 2009.

Parents of students at two Catholic schools learned this week that their schools will revert to being operated by the schools’ home parishes as of July 1. The two schools, St. Lawrence in Greece and St. Joseph in Penfield, have been part of the Monroe County Catholic Schools System since the system’s formation in 1994.

Meanwhile, studies are under way to determine the feasibility of reverting St. Louis School in Pittsford and St. Rita School in Webster to parish operation as early as the 2011-12 school year, according to diocesan spokesman Doug Mandelaro. No decision on such a move has yet been made, he said.

The decision to return St. Lawrence and St. Joseph schools to parish control was approved by Bishop Matthew H. Clark in consultation with the pastor of each parish.

Under the new configuration, each parish will have direct control over and responsibility for its school’s daily operation and finances. The Monroe County Catholic Schools System will assist the schools with information technology and human resources and staffing, and the schools also will continue to follow the diocesan curriculum.

"From a parish perspective, faith formation is a major parish priority as it is expressed in Catholic school," Father Schwartz said. "We see this as a rich and wonderful opportunity to provide faith formation for the growth of our parish."

Father Schwartz said he is optimistic that local control over the school will encourage parishioners to feel more connected to it, allowing the school to continue providing a high-quality education.

"(Principal) Sister Christina (Luczynski) has previously been a principal of a parish school, and she is confident that with the current staff that we have, that the transition can be made seamlessly," Father Schwartz said. "From a parish perspective, our finance council will have oversight of (the school’s) finances."

Father Schwartz said tuition at St. Joseph School for 2010-11 will rise to $3,300 from the $2,950 rate set by the diocese for the 2009-10 academic year. The priest noted that tuition does not cover the full cost of educating a student, and that the parish plans to subsidize a portion of such costs.

He said the parish hopes marketing efforts to increase the school’s enrollment will be bolstered by the announcement about the school’s return to parish control. The school currently has about 407 students out of a maximum of 428 spots, he said.

"The viability and the future of the school has just taken a giant step forward," Father Schwartz remarked.

That sentiment was echoed by Father Frank Falletta, pastor of St. Lawrence Church.

"St. Lawrence School is our pride and joy, and we believe the parish-school partnership will be a tremendous benefit to the long-term future of the school," Father Falletta said in a statement.

The prospect of returning schools to parish control had been among the recommendations made by a Catholic schools task force appointed by Bishop Clark in 2007. That task force also recommended the 2008 closure of 13 schools in the Monroe County Catholic Schools Systems in light of declining enrollment and a $1 million budget deficit that was projected to rise to $5 million by the end of the 2008-09 school year.

The possibility of local control at several schools does not allow for the reopening of any of the closed schools, Mandelaro said.

"None of the closed schools are being reopened," he said, noting that one reason Bishop Clark approved the task force’s recommendation on school closings was concern that if some or all of the schools slated for closure had been allowed to remain open, they might have drawn students away from the county’s other 11 schools, thereby destabilizing the entire school system.

That concern persists, especially in light of an 8-percent enrollment drop at the remaining schools this past year despite heavy marketing efforts, Mandelaro said. He attributed the decline in part to the economic climate and changes in demographics.

The idea of returning to the parish-run model "has been studied, bandied about and discussed" since the task force recommended it two years ago, Mandelaro said, noting that the idea has picked up steam in the past several months.