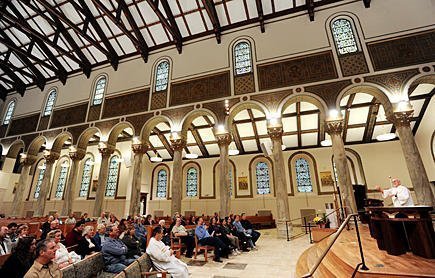 As a wedding photographer, Royal Chamberlain is a fan of new renovations to Rochester’s St. Monica Church, which he said have made it brighter and easier to photograph.

Crews added new lights throughout the church and painted the church’s brown ceiling white, which helps to highlight the decorated beams that span the building.

"I can sum up my reaction in one word: ‘Wow,’" Chamberlain said.

As a parishioner, Chamberlain also is a fan of the renovations, which he said have enhanced the welcoming spirit that drew him and his wife to St. Monica Parish 30 years ago.

One example is the new ramps leading up to the altar area. The ramps recently enabled a parishioner in a wheelchair to participate in a Mass as an extraordinary minister of holy Communion — something she wasn’t able to do previously, he said.

"Now she and other parishioners can participate," Chamberlain said.

Chamberlain attended a Welcoming Celebration April 10 that marked the return of St. Monica and Emmanuel Church of the Deaf parishioners to the 95-year-old St. Monica Church at 831 Genesee St. Parishioners worshipped at various locations in Rochester during the eight months of renovations.

The original pews were reinstalled on an angle after they had been refinished in a light honey color. The church’s auditory system was upgraded, and a curved blue screen was placed behind a new altar and ambo. The screen was designed to cut down on visual interference for those who are communicating in sign language.

"Our major concerns were to be welcoming and accessible, and we’re very proud of the fact that all of our sacramental facilities are accessible," said John Curran, a member of the parish facilitation team.

An enlarged vestibule can accommodate gatherings ranging from 80 to 150 people, which gives the parish the capability of hosting Saturday soup suppers or adult faith-formation events there, Curran said.

"Everybody’s just been floored and wowed by the work and progress in here," said parishioner Craig White, a member of the parish facilitation team. "To make it all come together, it took the efforts of many hands."

The Welcoming Celebration, which featured hymns and youth participation, was a way for parishioners to say thanks to those who offered them hospitality when they were unable to worship in their own church. Those offering hospitality included Aenon Baptist Church in Rochester, which loaned its space for Saturday Masses and special events; Staybridge Suites in Rochester, a neighboring hotel which hosted Sunday Masses; and St. Helen Parish in Gates, which hosted funerals.

"You taught us something about the meaning of the word hospitality," said Father Raymond Fleming, pastor of St. Monica Parish and Emmanuel Church of the Deaf.

The April 10 celebration included parishioners saying welcome in English, American Sign Language, Portuguese, German, Nigerian, French and Italian, demonstrating the myriad cultures of those who worship at the church. The celebration was capped with a reception and a mayoral proclamation praising the renovations.

Parishioners also celebrated the renovations during a special combined Mass April 11. Additionally, Bishop Matthew H. Clark was scheduled to bless the new altar and ambo at 10 a.m. Sunday, May 2.

Father Fleming pointed out during the Welcoming Celebration that the new altar’s five-legged design represents the five faith communities — Our Lady of Good Counsel, St. Augustine, Ss. Peter and Paul and St. Monica, and Emmanuel Church of the Deaf — that came together to form the new worship community, now branded the New St. Monica Parish and Emmanuel Church of the Deaf.

Despite the difficult work that the parish has done in blending five communities from different traditions, people have remained faithful to the church, the priest said. He said he believes the celebration and renovation mark the beginning of new life for the parish, for the surrounding neighborhood and for the church as a whole.

"I believe this is a sign of what’s to come," Father Fleming said.